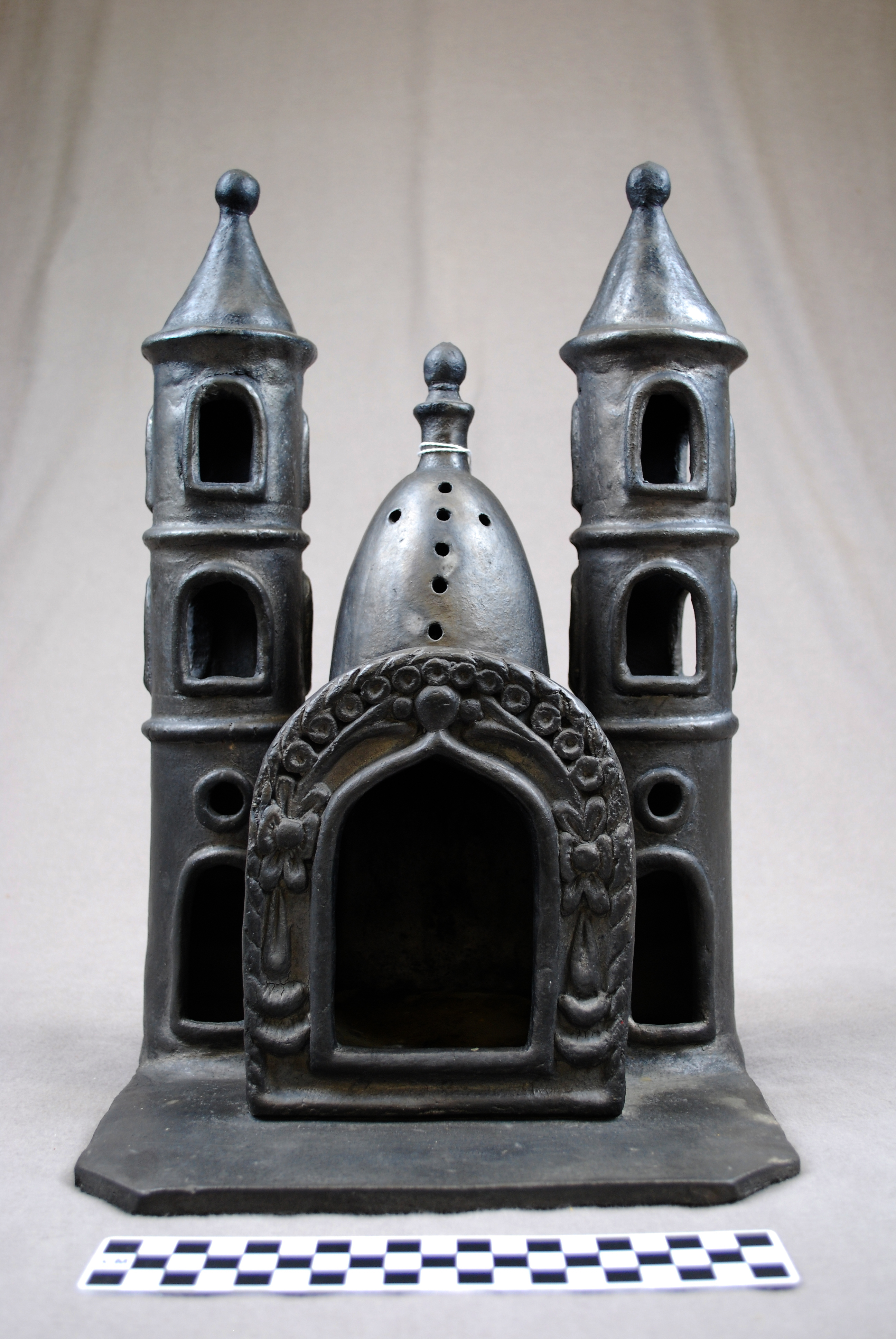 This miniature black ceramic cathedral is a home altarpiece used for personal prayer in a family’s home. Typical altarpieces are found in Mexican homes, handcrafted by an elder woman of a family. Altars are handcrafted in order for the family to have a family altar to pray or give offerings to as part of their Catholic faith. Younger women in Mexican families can also make them as they learn the art from their mothers and grandmothers. This object was purchased in Puebla, Mexico and may be loosely modeled after the Puebla cathedral. Altarpieces are usually dedicated to animage of the Virgin Mary or a particular saint; altarpieces such as these are placed in the center of the home altar, which can include photographs of family members, images of other saints, and other gifts. Altarpieces are used by family members to present votive offerings.

The city of Puebla, Mexico was founded in 1531 during Spanish Colonial rule of Mexico. It was founded at the foot of the Popocatepetl volcano, with the city and volcano located in the Valley of Cuetlaxcoapan. The city was a strategic point for commercial and cultural trade as it was the mid-way point for the trade route between the Port of Veracruz and Mexico City. This trade route brought goods in from Europe to the mainland of Mexico. In the city, the Puebla cathedral is one of the main religious buildings in the Historic Center, with construction of the cathedral starting in 1535, several years after the initial founding of the city. Construction of the cathedral officially ended in 1768, taking a little over 200 years to complete the cathedral. Some of the reasons the construction took so long are due to the amount of labor available, and inconsistent funding.

As the Puebla cathedral is dedicated to the Catholic doctrine of the Immaculate Conception, this altarpiece may have served the same function. This doctrine states that Mary was conceived without the “stain” of original sin. Original sin is a religious concept that states that all human-beings are born with an innate desire to disobey the will of God (behave sinfully) and therefore all people must be saved from this sin by God.  As part of the Immaculate Conception, through the influence of God, Mary is believed to have been created without original sin. The altar piece having a possible connection to Mary would be beneficial to have in the home for personal worship because many Catholics believe she can influence the grace of God. [Caitlin VanWie, edited by Kathryn S. McCloud]