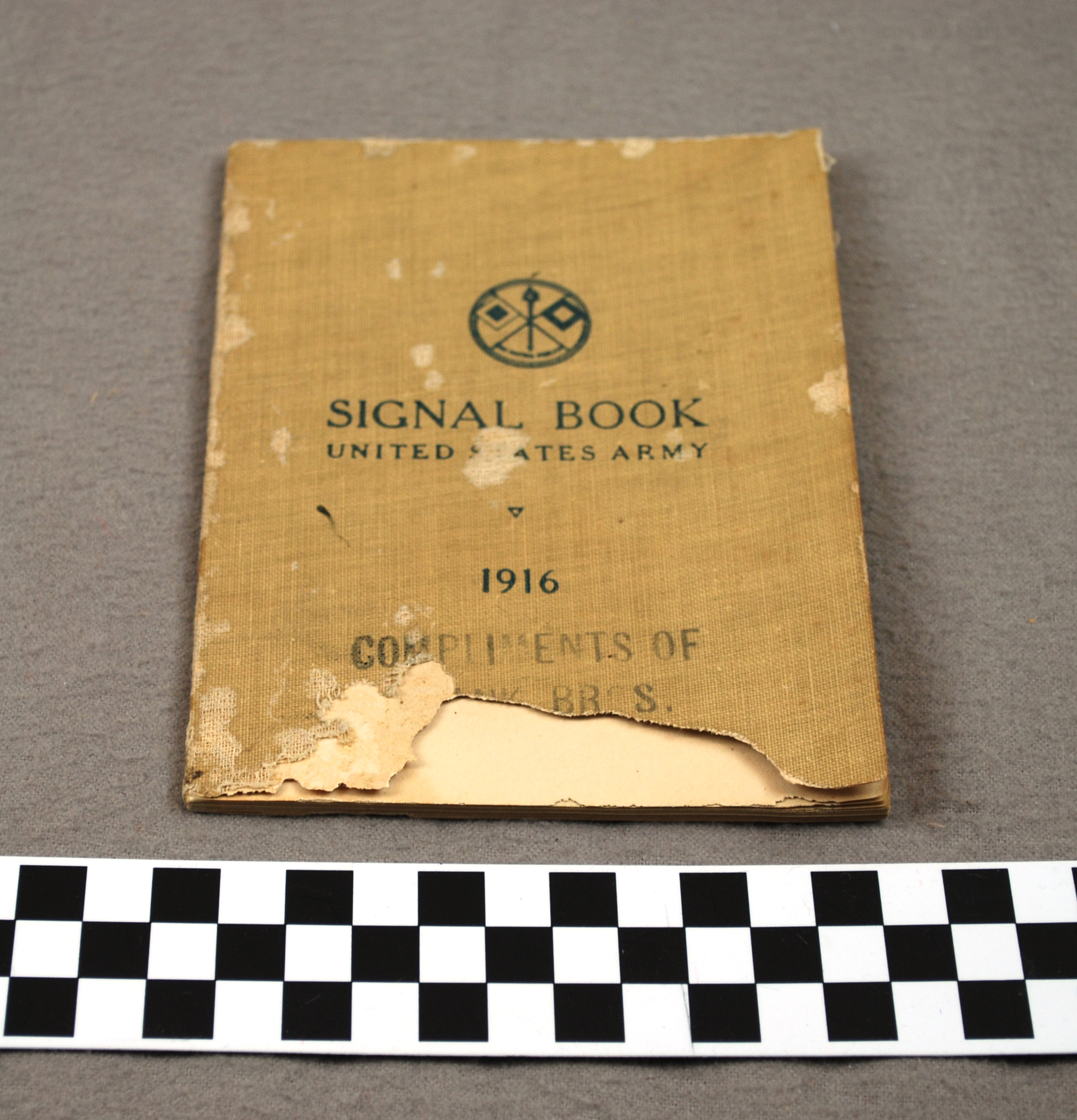 This object is a United States Signal Book from the year 1916. The book contains information and instructions on how to communicate using different systems. This booklet has the Army Signal Corps symbol stamped in the front with the words “Signal Book, United States Army, 1916.” Some of the communication methods included in the book are, American and International Morse Code, and the Semaphore method. This signal book was published by the Military Publishing Company in New York City. This signal book shows a message from the War Department Chief of Staff H.L. Scott.

In today’s modern world there are many different types of communication. All of these forms of communication make in incredibly easy for people around the globe to get in contact with each other. Cell phones have made it possible for people to have a face to face conversation with someone 3,000 miles away, this can be achieved with the push of a button. However, 100 years ago communication was much more difficult. In a time when messages had to be written and could only travel at the speed of a horse, getting a message to someone could take days. This signal book gives an example of the many forms communication could take in 1916. At this time World War I was in its 2nd year and although the U.S. did not enter until April 1917 the military still needed to know these forms of communication.

Signal books like the one here were used by members of the Signal Corps established in 1860 and responsible for all forms of communications and information systems. The father of the Signal Corps was Albert J. Myer a doctor stationed in Texas, he developed a military signaling system based on his dissertation. The Signal Corps played an important role during the Civil War when Myer’s invention named the “Wig Wag” was used. The “Wig Wag” used one flag instead of the two that had previously been used. However, this form of communication was not reliable due to weather causing visibility problems at times. During WWI the Signal Corps were made up of carrier pigeons and the hello girls. The “hello girls” were part of the Signal Corps Female Telephone Operators Unit 25. Because these women had to operate switch boards in both France and England, bilingual women were usually recruited. The Signal Corps is still an important part of the United States Army.

One form of communication featured in the signal book is “Morse Code” which is a result of the telegraph. Although forms of telegraphy were used in Europe they were mostly made up of visual telegraphy. Samuel F.B. Morse and Alfred Vail invented the first long distance electric telegraph. This invention would go on and transform long distance communication. The telegraph worked by transmitting electrical signals over a wire laid between stations. The code worked by assigning letters in the alphabet and numbers a set of dots (short marks) and dashes (long marks) based on the frequency of use; letters used often (such as “E”) got a simple code, while those used infrequently (such as “Q”) got a longer and more complex code. In 1844 Morse made a sucessful demonstration from Washington D.C. to Baltimore with the words “What hath God wrought.”  This demonstration helped to promote the use of the telegraph and by 1866 many American cities had telegraph posts.

Another form of communication technique featured in the signal book is the semaphore. The two arm semaphore can be used with stationary semaphore or two hand held flags. The first semaphore was invented by Claude Chapp and his brothers. The semaphore could be either a post or two signal flags. The signal flags are usually made up of two colors and are in a diagonal pattern. The flags are held in different positions and each represent a letter or number. Although using semaphore flags was not a primary form of communication during WWI it could still be used when troops were nearby and had visibility of each other. Knowing different forms of communication was important because troops had to be ready under any circumstance.

Although, the communication methods showed in the signal book have long been replaced with modern technologies such as phones and the internet. Inventions such as the telegraph and Morse Code have helped shape the way in which communication is conducted in the 21st century. [Joscelynn Garcia, edited by Jennifer McPhail]

Raines, Rebecca Robbins. 2005. Getting the message through: a branch history of the U.S. Army Signal Corps. Honolulu: University Press of the Pacific.