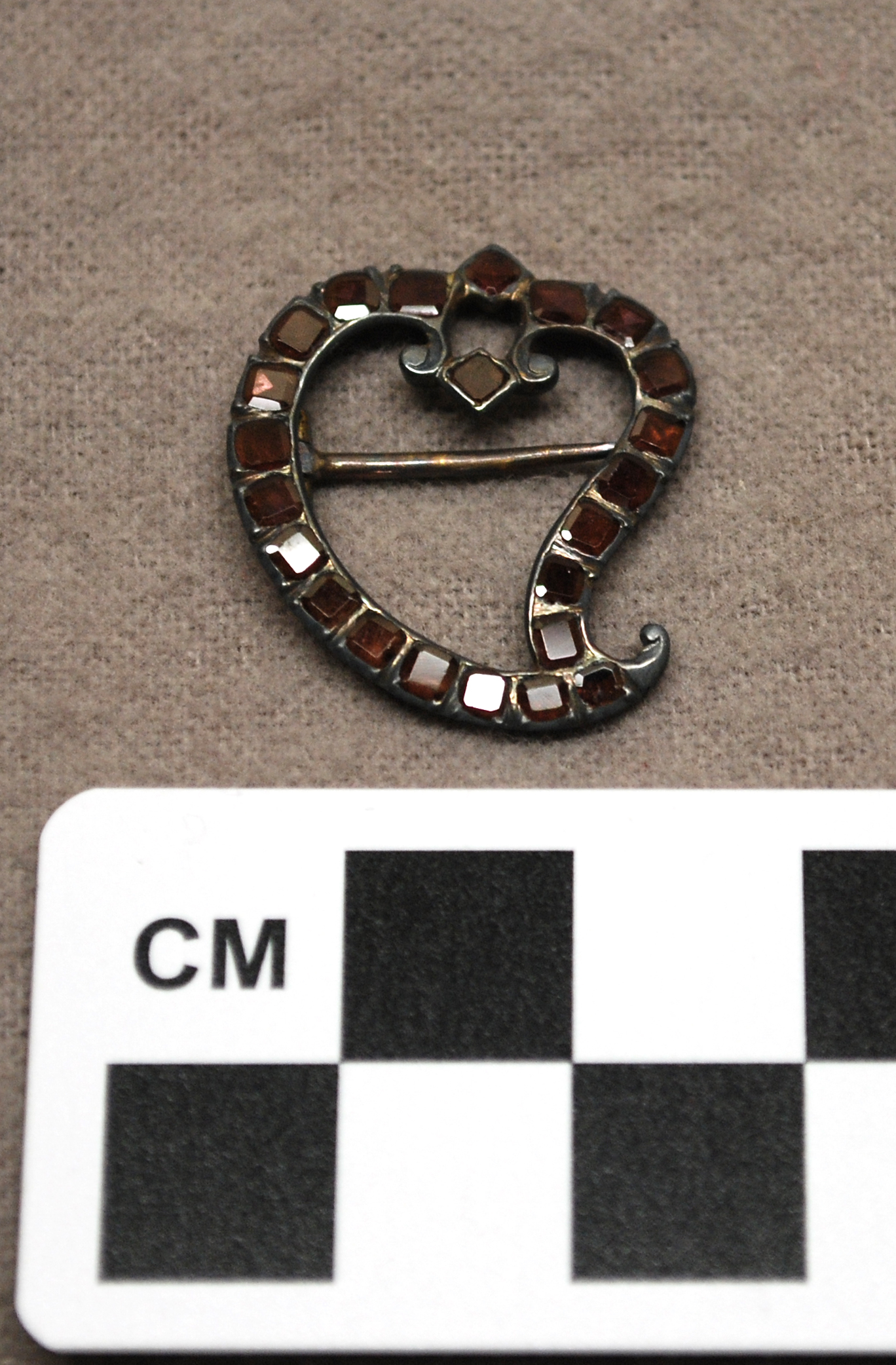 This item is a brooch that was purchased by John King (1758-1842) and then passed down from granddaughter-to-granddaughter until it was given to the donor. The brooch is made of a dark gray colored metal, that may have been gold plated originally, and there are 23 reddish-purple colored square gemstones set into the front of the brooch that are believed to be amethysts. The clasp on the back of the brooch is a single straight pin on a hinge, but there is no longer a latch to place the pin in.

John King fought in the American Revolutionary War from 1777-1780 and served as a member of George Washington’s Commander-in-Chief Guard, also known as Washington’s Life Guard. King is listed in the “Muster Roll Returns” which is the most comprehensive list of those who served in the guard. The guard was formed by Washington on March 11, 1776 when he realized that his army was about to become mobile and he would need a guard to protect himself and the headquarters staff. Washington sent out a General Order detailing the type of men he needed to form this guard. He wanted four men sent from each regiment, excepting the artillery and riflemen; these men were to be of good character, sober, well-made and clean. He even described the height he wanted these men to be, which was between five foot, eight inches and five foot, ten inches tall. He also included in this order that if the men selected were not willing to be in his guard then they were not to be sent and another should be selected.

Captain Caleb Gibbs was selected by General Washington to command the new unit. Gibbs was promoted to the rank of Major, and was given the title Captain Commandant. Gibbs’s task was to organize the new unite and to get them ready for their mission, which was to protect Washington, his staff, the army’s cash and official papers. Washington’s nephew Lieutenant George Lewis was a member of Gibbs’s immediate staff of officers. Not only was Gibbs to organize them but he was to procure the unit a uniform. Washington wanted his guard to match him with a blue and beige uniform, but Washington said any color would be fine except for red. In the end the uniform consisted of a blue and beige uniform with a red waistcoat (they were the only ones available) and helmets that were actually British Dragoon helmets that had been captured by a privateer. The helmets had a blue turban added to them and a white plume that was tipped royal blue. A white cockade, known as the French Alliance cockade, was added to the helmet as well. The red waistcoat and the unique helmet set the guard apart from the rest of the Army which was Gibbs’s goal.

These men not only served their role as guards, but they were considered an elite unit in the Army. This is because they were Baron Frederick von Steuben’s demonstration unit for the new American Drill. Once these men were trained, they then trained the other regiments of the Army that was camped at Valley Forge. Once the Army left Valley Forge, the Guard was frequently employed in the role of light infantry and were attached to larger military units for engagements. Each time the Guard distinguished themselves as an elite force and their reputation grew. When the War came to a close, the guard was furloughed after completing one final mission, which was to escort Washington’s personal belongings and records back to his home of Mount Vernon on December 20, 1783.

Sadly most the records about these guardsmen were lost in1815 when the Charlestown Navy Yard caught fire which was where Gibbs had stored them after his retirement. Tomorrow marks the 238th anniversary of the formation of Washington’s Commander-in-Chief Guard. [Jennifer McPhail]

Lossing, Benson John. 1972. The pictorial field-book of the revolution or, Illustrations, by pen and pencil, of the history, biography, scenery, relics, and traditions of the war for independence. New York: Harper & Bros.