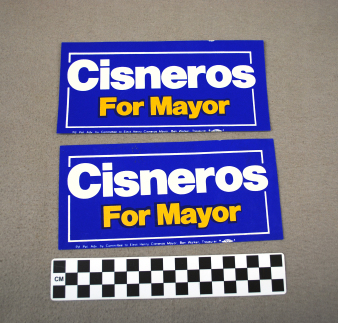 Henry Cisneros’ political career began after he returned to San Antonio from Washington D.C and took a teaching position at the University of Texas San Antonio. Henry noticed that the Mexican American community had been neglected for far too long and most city council members were all from wealthy zip codes. Henry decided to run for city councilman and won making him the youngest city councilman at the time. During his time as a councilman he allied himself with groups whose focus was to develop funding for Latino communities.  He would serve on the city council for six years.

Cisneros announced that he would not be running for another term in 1987. Following his time as mayor he then went on to become the chairman of a company. Cisneros also was the host of a television show called “Texans,” as well as a host for a radio show. In 1992 he served as an adviser on Bill Clinton’s presidential campaign. He later moved to Los Angeles and served as an officer of Univision Communications. Cisneros has since returned to San Antonio and established a firm to help with affordable housing. In 2015 he served as a chairman for the City of San Antonio Chamber of Commerce. Cisneros is also the author of several books and has received multiple awards. [Joscelynn Garcia]