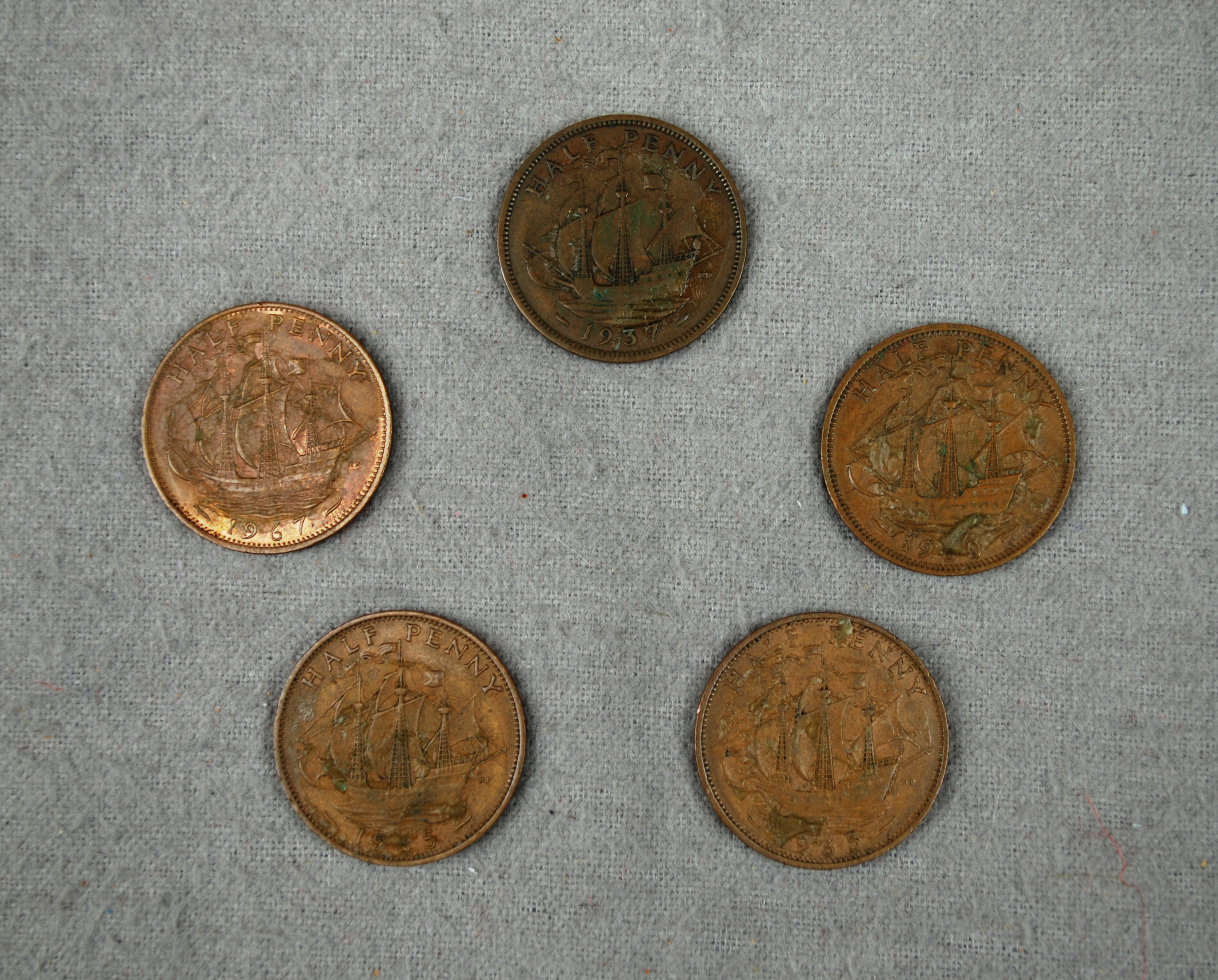 These are British Half Penny coins. The half penny is often referred to as a ha’penny and has been made from several different metals over the years. These particular half pennies are made of bronze. The coins are each from a different year: 1937, 1960, two are from 1965, and one is from 1967. There is another 1919 half penny currently on display in the English culture area of the Institute of Texan Cultures that also belongs to this donated group. British coins generally have the reigning King or Queen on the front of the coin. On the back of the coin there different designs are used for each denomination. For the half penny the backside either had Britannia or the “Golden Hind” on it. In this set, the coin from 1919 (which is on display on our exhibit floor) has the image of King George V with the image of Britannia on the reverse. The 1937 coin has the image of King George VI with the image of the “Golden Hind” on the reverse. The 1960, the two 1965’s and the 1967 all have Elizabeth II on the front and the “Golden Hind” on the back. These coins are also pre-decimal, meaning they are from before the British government switched their currency from a system based on weight to the decimal system. These pre-decimal coins are no longer considered legal currency in the United Kingdom.

Image from the Decimal Currency Board Guide, via: Newcastle Historian on the Skyscrapercity.com forum

The half penny was introduced during the 13th century and is still in use today, though the value of the half penny changed after the British government switched the currency to decimalization. The pre-decimal currency that was used in Britain was based on the weight of a pound of sterling silver. A British pound was divided into 20 shillings and 240 pennies, which meant that to make a pound using half pennies you needed 480 coins. After Britain switched to a decimal currency system, one pound is made up of 100 pennies and one penny is made up of 2 half pennies.

Many half pennies came into Texas when British colonists brought over a popular pub game, called Shove Ha’penny, from their home country. The game is a smaller version of the aristocratic game shovel board, that was played during the Tudor times. Shovel board was played on on 30 feet long narrow tables. Players shoved metal weights down the tables, trying to get them as close to the other end of the table as possible, without falling off. In the smaller version, Shove Ha’penny, players take turns to push coins across a board with a series of parallel lines marked across it.   The areas between each line are called “beds.” The objective is to push the coin so that it lands inside a bed without touching the lines.  To win, a player needs to get a coin in each “bed” three times, which is no easy task for the “beds” furthest away from the front of the board.   If a player manages to score with three coins in one “bed” in a single turn, he is said to have scored a “sergeant,” and if all five coins score in a single turn, it is a “sergeant major” or a “gold watch.”

The game is still very popular in pubs across Great Britain and in pubs here in the United States. Below is a video showing some of the rules of the game. [Jennifer McPhail, edited by Kathryn S. McCloud]

Further Reading:
British Museum, and Herbert A. Grueber. 1899. Handbook of the coins of Great Britain and Ireland in the British Museum. London: Trustees.

Davies, Glyn. 2002. A history of money from ancient times to the present day. Cardiff: University of Wales Press.