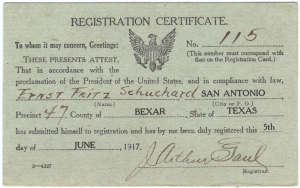 Students protest the Vietnam War and draft. Image by uwdigitalcollections via Wikimedia Commons

As for Ernst Schuchard, after his service he returned to San Antonio to work as an engineer at the Pioneer Flour Mill which was founded by is grandfather, Carl Guenther. The Guenther Family immigrated to Texas from Germany. After advancing to the position of Secretary and eventually to President at the flour mill, Schuchard began making detailed drawings and paintings of the Missions in San Antonio. Schuchard was involved in the research and reconstruction of the grist mill at Mission San Jose. Ernst Schuchard became a well-known artist in Texas. He died in San Antonio in 1972 and was buried at Mission Burial Park South. [Kim Grossett, edited by Joscelynn Garcia]

Coffman, Edward M. The War to End All Wars: The American Military Experience in World War I. Lexington, Ky: University Press of Kentucky, 1998.