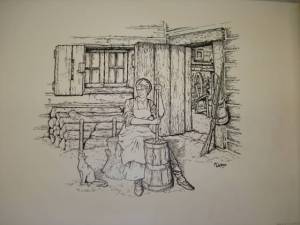 A number of pioneer women provided early accounts of life in frontier Texas. Stephen F. Austin’s cousin, Mary Austin Holley, wrote Texas: Observations, Historical, Geographical, and Descriptive, in a Series of Letters, Written during a Visit to Austin’s Colony, with a view to a permanent settlement in that country, in the Autumn of 1831, which was published in 1833. Her family letters and diary gave a good record of life during the Texas Revolution.  She later wrote a book titled Texas which detailed the history of the state and it is one of the first known histories of  the state in English.  Jane Cazneau published Eagle Pass; or Life on the Border under the pen name Cora Montgomery in 1852. Her book detailed the years between 1840-1852 during which her husband founded a town and opened a trade depot. Teresa G. Viele wrote Following the Drum: A Glimpse of Frontier Life in 1858. The book described the years she and her husband Egbert Ludovicus Viele stayed at Fort Ringgold. It included descriptions of the landscape, food, and Comanche raiders.

Pioneer women writers in Texas also used their literary talents to fight for the right to vote and advocate for social reform. Female writers in Texas have written everything from poetry to novels. One of the first articles dedicated to the history of female writers in Texas was a two-part article titled “Women Writers of Texas” in 1893 by Bride N. Taylor, vice president of Texas Women’s Press Association, which ran in the Galveston Daily News. It gave brief biographies of more than 70 female authors starting with Mary Austin Holley. Since frontier times, Texas has had a long, rich history of female authors who contributed to the state’s literary legacy. [Ashton Meade, edited by Joscelynn Garcia]

Rabb, Mary Crownover. Travels and Adventures in Texas in the 1820’S, Being the Reminiscences of Mary Crownover Rabb. Waco: W.M. Morrison, 1962.