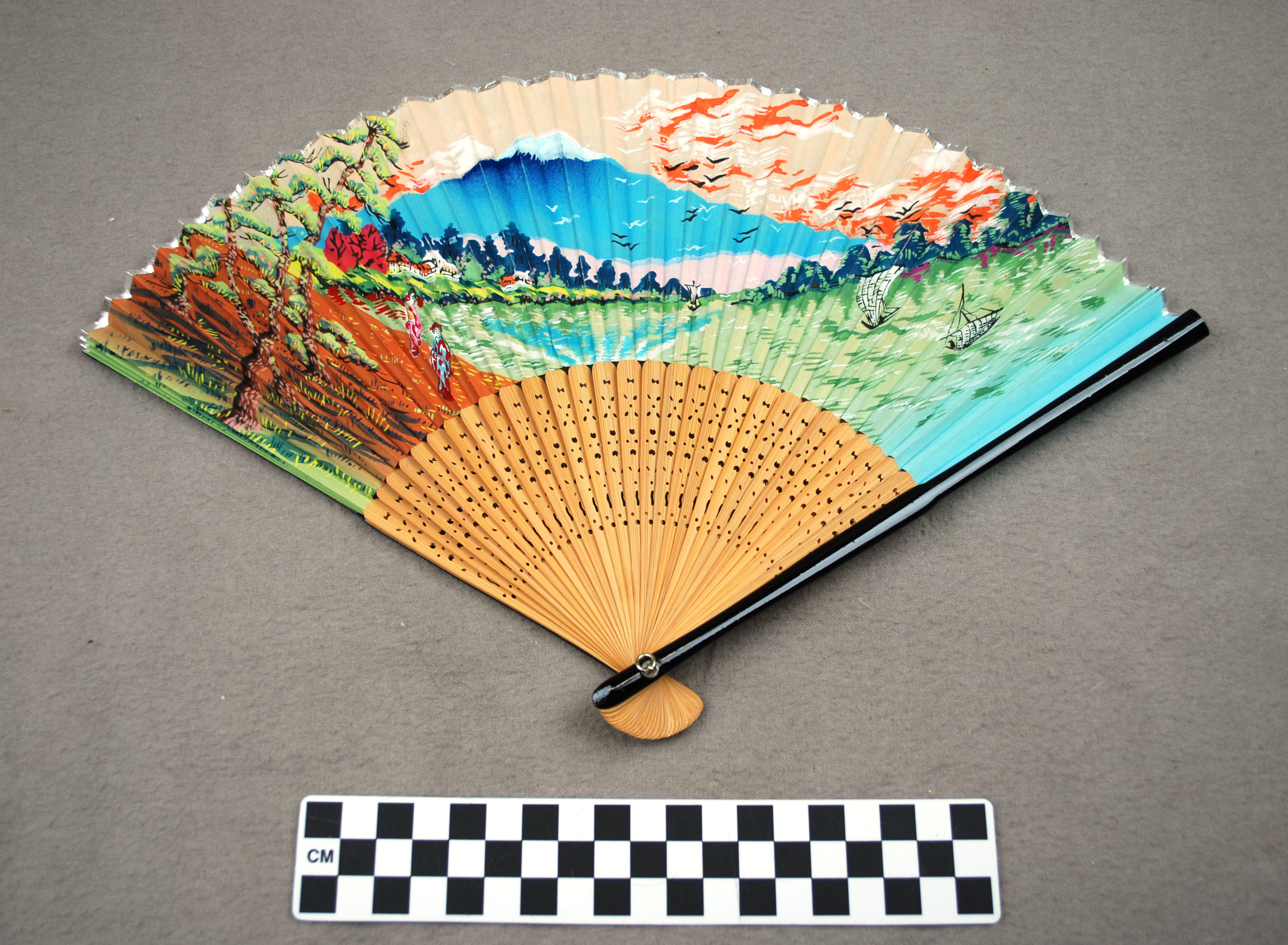 Various cultures around the world have used handheld fans throughout the centuries. However, in Asia they are also important artifacts that are found in nearly all aspects of culture, from entertainment to art and even military use. This particular object is a Japanese folding fan that features a seascape and image of Mount Fuji (foo-jee).

The handheld Japanese folding fan, or sensu (sehn-soo), came about in Kyoto during the Heian period of Japan. Often called Japan’s Golden Age, the Heian period spanned hundreds of years of relative peace for the country that allowed for a greater development of the arts and poetry. The Heian period is also when the Tale of Genji was written by Murasaki Shikibu, and today many scholars believe it to be the first novel in the world! During this time, handheld folding fans were invented in Japan and became popular with the Japanese Imperial Court. Over time the Japanese folding fan has evolved as an integral piece of Japanese culture.

Japanese folding fans have served various functions over the centuries. Of course, they were used as most fans are used: to help keep someone cool! In Japan, the summers and rainy seasons can be very hot and humid. For this reason, Japanese folding fans are very popular accessories at outdoor festivals and places without air conditioning such as ryokan (ree-yo-kahn)—traditional Japanese homes and hotels. Historically, Japanese folding fans were also important because they were used to write notes and communicate with others via letters and poetry on the fans (paper was an expensive commodity back then, so nothing was wasted.) Large, colorful fans were used to decorate the homes of those that could afford them, and the Japanese military even used colorful fans as signaling flags! Japanese folding fans are also used in many forms of traditional Japanese ceremonies and entertainment such as the Japanese Tea Ceremony and kabuki (kah-boo-kee) theater. Over time, people decided to decorate their fans, and the practice led to a vibrant artist market specifically for such. This Japanese folding fan at the Institute of Texan Cultures is vibrantly printed with a scene of the ocean in front of Mount Fuji.

What is Mount Fuji?

Mount Fuji— also known as Fujisan (foo-jee-sahn) in Japanese—is the tallest natural geologic formation in Japan. It stands 12,380 feet tall, and even though it’s called a mountain, Mount Fuji is actually an active volcano! One of the most famous symbols of Japan, Mount Fuji is only about sixty miles away from Japan’s capital city Tokyo. Mount Fuji is arguably Japan’s most popular tourist destination for international and domestic tourists alike. However, the popular significance of Mount Fuji is not a modern phenomenon.

Over millennia, Mount Fuji has also been seen as a sacred place within the Japanese religion of Shinto. Shintoism places great importance on the various spirits and gods, also known as kami (kah-mee), that are believed to inhabit everything within the natural world. Mount Fuji features many Shinto shrines, with the most prominent being the Fujisan Hongu Sengen Taisha at the base of the Mount Fuji hiking trail. It’s been said that many famous and important people in Japanese history such as Minamoto Yoritomo, Hojo Yoshitoki and Tokugawa Ieyasu have traveled there and prayed to the gods at the base of Mount Fuji. Surrounded by a large forest and five lakes, one can easily see how Mount Fuji could inspire folding fan artists to try and capture the cooling image of Mount Fuji’s natural beauty!

Today, Japanese folding fans are very popular accessories that can serve multiple purposes—a prop in a play or dance; a means to keep the summer heat at bay; or even as a secret way to write letters! Regardless of use, today Japanese folding fans come in a wide range of colors and designs that further the popularity of Japanese culture. [Caira Spenrath, edited by Kathryn S. (Barr) McCloud]

Japan. The Empire of Japan Brief Sketch of the Geography, History and Constitution. Making of America. Philadelphia: W.P. Kildare, 1876.

Katō, Genchi. A Study of Shinto The Religion of the Japanese Nation. London: Routledge, 2011.