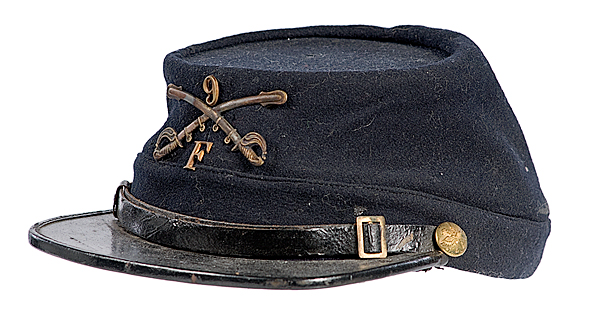 This item is an 1889 model of a Buffalo Soldier forage cap. It has an attached 1872 model brass cavalry insignia that shows two crossed swords. Above the swords is the regimental number 9, and below the swords is the troop letter, F. Buffalo Soldiers belonged to one of two regiments, the Ninth United States Cavalry or the Tenth United States Cavalry. The regimental number 9 means that this cap was used for the Ninth United States Cavalry, commanded by Colonel Edward Hatch of Iowa. The two regiments were divided into a number of smaller troops. The troop letter F means that this cap was used by a soldier in Troop F, led by Lieutenant Colonel Wesley Merritt in Fort Davis, Texas.

The motto of the Ninth United States Cavalry was, “We Can, We Will.” This motto truly guided the regiment as they carried out a variety of assignments. The soldiers protected the frontier, recovering livestock, capturing horse thieves and serving justice. They restored a number of forts, built roads, hung thousands of miles of telegraph lines and escorted stagecoaches, wagons, mail parties, survey parties, railroad trains and railroad crews. The soldiers even partook in frontier campaigns. Perhaps most importantly, the Buffalo Soldiers of the Ninth United States Calvary overcame prejudice on the frontier and were greatly respected for their hard work and contributions. [Lauren Thompson, edited by Kathryn S. McCloud]

Glasrud, Bruce A. 2011. Brothers to the Buffalo Soldiers perspectives on the African American militia and volunteers, 1865-1917. Columbia: University of Missouri Press.

Leckie, William H. 1999. The Buffalo Soldiers: A narrative of Negro Cavalry in the West. Oklahoma: University of Oklahoma Press.