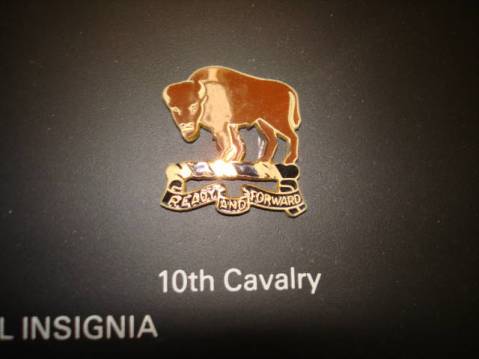 Liberators of Cuba, soldiers of the 10th Cavalry after the Spanish-American War. Image via Wikimedia Commons.

The Civil War had depleted the troops, and the Army needed to replenish their numbers for a peacetime military.  As part of their reorganization, the Army created six regiments of black soldiers- two cavalry and four infantry– approved by Congress.   These regiments consisted entirely of enlisted black men, but were led by white officers.

Many of the men who joined these regiments had served during the Civil War and were farmers, bakers, painters, and many other occupations.  However, the military offered an opportunity for social and economic advancement.  As soldiers, these men earned $13 a month, along with food, clothing, and shelter- much more than their other jobs offered.

The 10th Cavalry was formed in Fort Leavenworth, Kansas, and was commanded by Colonel Benjamin Grierson.  Their biggest assignment was to aid in westward expansion and protect American settlements.  Tasked with keeping order, they were often confronted with raids by bands of numerous Native American tribes, who were growing more and more desperate due to buffalo- their main food source- going extinct from sport hunting by white settlers and soldiers.

Fighting bravely in over one hundred battles against the Native tribes, even when outnumbered, soldiers like those in the 10th Cavalry earned the respect of tribal leaders.  To the tribes, the soldiers’ hair was thick and curly, like that of a buffalo, and the American Indians believed the soldiers were brave like a buffalo, so began calling the black soldiers “Buffalo Soldiers.”  It was a term of respect toward what they considered a valiant opponent in battle.  The symbol of the buffalo became the regiment’s official insignia in 1922.

Besides their contributions in battle, the soldiers of the 10th Cavalry, as well as the other buffalo soldier regiments, had countless accomplishments.  Constantly subjected to racial prejudice, and making due with cast-offs like aging horses and worn out equipment from more prestigious regiments, the buffalo soldiers carried out missions that were vital to America’s success.

In 1871, the 10th Cavalry accompanied General William T. Sherman on an inspection tour of Texas.  They were instrumental in mapping the uncharted territories of the state.  In addition, they strung thousands of miles of telegraph line, opened new roads, escorted stagecoaches and wagon trains, protected railroad crews, and were the driving force behind building and renovating dozens of frontier forts, including Fort Stockton in west Texas.

The 10th Cavalry, and all buffalo soldiers, hold an enduring legacy in American history.  Their success in the face of adversity makes them true heroes, and their contributions to the expansion of the United States can be seen throughout the stories of the American west. [Carrie Klein, edited by Kathryn S. McCloud]

Leckie, William H. and Shirley A. Leckie.  The Buffalo Soldiers: A Narrative of the Black Cavalry in the West.  Norman: University of Oklahoma Press, 2003.