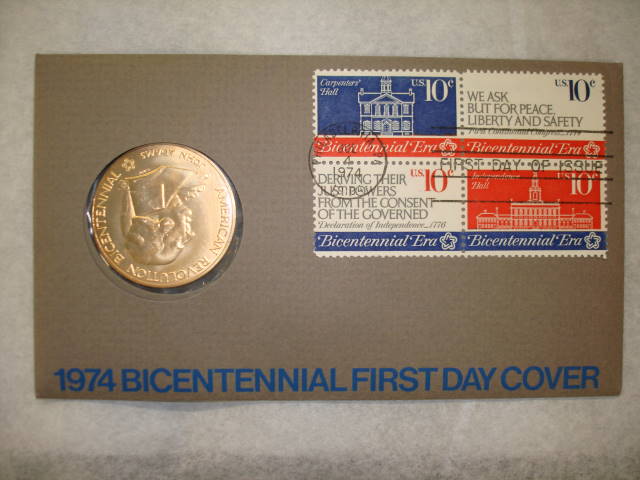 This object is a commemorative medallion issued by the United States Department of the Treasury in honor of the Bicentennial of the American Revolutionary War. This is the third medallion issued in a series of five, for information about the first and second medallions, please see out blog posts from March 20 and March 24, 2014. The front side of the medallion shows a profile of John Adams and on the backside is a relief of the coastline of the United States with a man superimposed on the relief holding out a bundle of papers towards the east. Around the top edge of the coin the words “First Continental Congress” are printed and on the bottom is “For The Recovery Of Our Just Rights.” The medallion was issued with two information cards and another medallion inside an envelope that had four commemorative stamps on the front. The second medallion is made of plastic and shows the official logo of the American Revolution Bicentennial.

John Adams was a lawyer from Boston who became an important leader in the fight for independence. Adams was originally a moderate to revolutionary activities and instead based his opposition to British policies on a legal basis. He was elected to the First Continental Congress and served in each succeeding Congress until 1777. Adams was part of those who helped draft the Declaration of Rights and an address to King George III himself. During the Second Continental Congress, Adams was a partisan for complete Independence from Great Britain and served with Thomas Jefferson and Benjamin Franklin and two others on a committee to draft the Declaration of Independence. During the war Adams dealt with the problems of military administration and also with the international politics of the emerging nation.  Adams served as the second president of the United States with Jefferson as his Vice President. He died the same day as Jefferson on July 4th, 1826, the 50th anniversary of the Declaration of Independence.

This medallion was launched in 1974, which was the 200th anniversary of the First Continental Congress. There were a total of five medallions issued with one medallion being issued for each year of the American Revolution. [Jennifer McPhail]