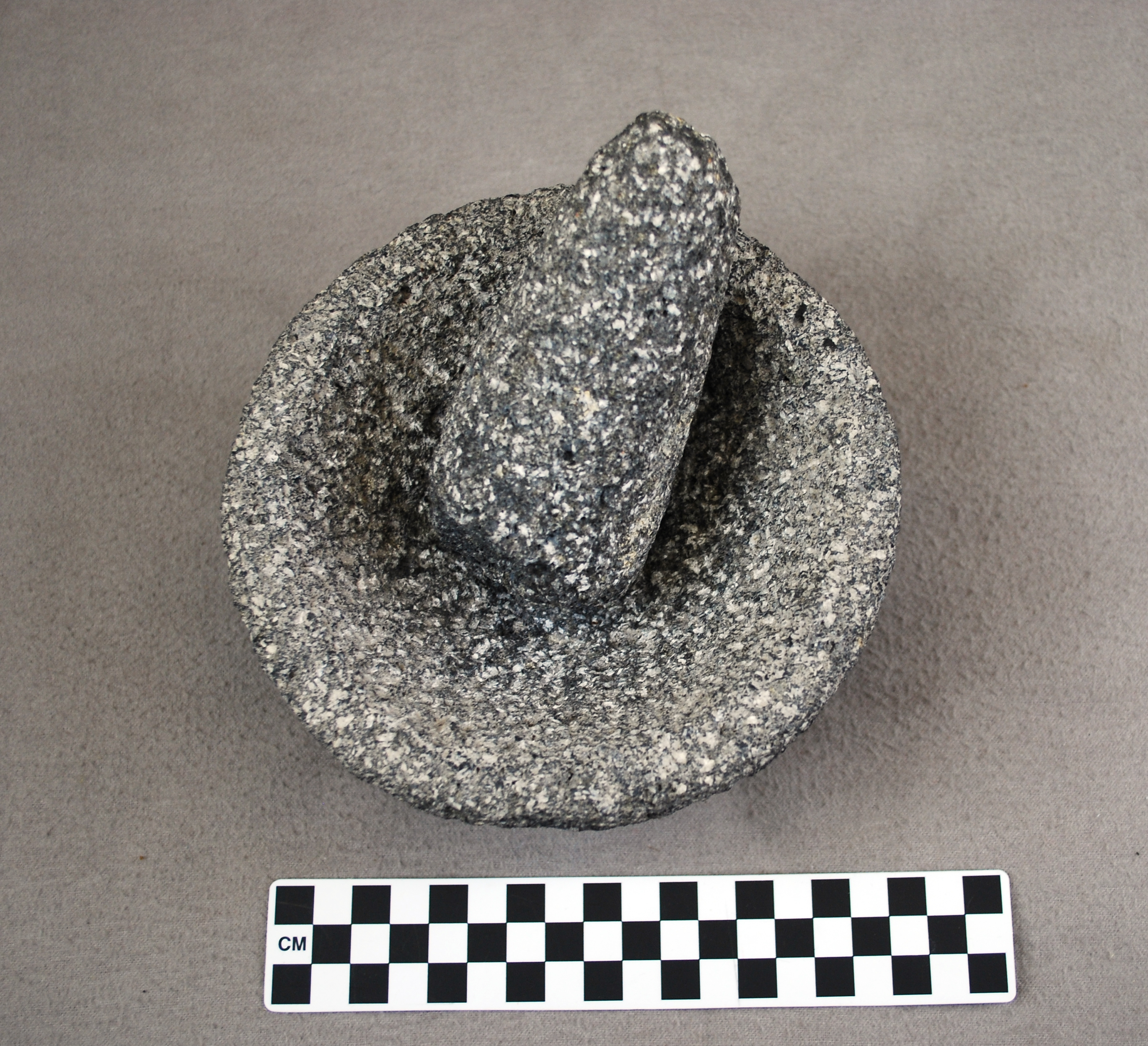 When dining at a Mexican restaurant a molcajete like the one pictured above is usually somewhere in sight. It is also commonly found in Mexican households, and is often passed down from generation to generation. In English a molcajete is called a mortar and tejolote, or pestle. The word molcajete comes from the Nahuatl word molcaxitl. Mortar and pestles are made of various materials. The most popular ones are made of ceramic, stone, hard wood, porcelain, basalt, brass, or glass. This object is most likely made of vesicular basalt, a type of volcanic rock. Although a mortar and pestle are also used for medicinal purposes the type pictured above is mostly used for food preparation.

Mango and avocado being mixed in a molcajete. Image via realfoodtraveler.com.

The origins of the molcajete can be traced back centuries. Many have been found in archeological sites including Aztec and Maya civilizations. Although similar to the tripod molcajete, the ones that have been found are called metates. However, they are used for the same purpose which is to process and prepare food. Two popular modern dishes that a molcajate is used for are salsa and guacamole. A traditional recipe for salsa made with a molcajete would call for tomatoes, red and green chilies of your choice, garlic cloves and salt. The tomatoes and chilies are heated on the stove and then crushed on the molcajete. There are many different varieties of salsa you can make using a molcajete, a simple Google search can get you on your way to enjoying tasty salsas.

Absorbing the flavors of every food prepared in it, the molcajete gets better with age. However, when first receiving a new molcajete you will have to do a few steps to prepare it for use, so no grit from the molcajete will end up in your salsa. This is called curing or seasoning the molcajete. People cure their molcajet’s in different ways but a common method is to soak the molcajete in water, then scrub it with a wire brush. After scrubbing, use the molcajete to grind rice until there is not grit inside, then the molcajete is ready to enjoy. However, beware of unauthentic molcajetes which will leave grit in your salsa no matter how many times you try to cure it.

Making an authentic a molcajete can take anywhere from 4-5 hours to complete. The first step in the process usually involves finding the basalt volcanic rock that is needed. Once the stone is found large pieces are cut usually with simple tools. The large stone is then cut into smaller pieces and taken back to where the artisan will work on it. Getting the stone to its final shape has to be done with precision. One wrong step or mistake can ruin the molcajete and the hours spent would have been wasted. The rock ends up with the traditional three legs and sometimes has the head of a pig or bull carved as well. The molcajete has been around for hundreds of years and will probably stick around for a hundred more. [Joscelynn Garcia, edited by Jennifer McPhail]

The following video shows how to make a molcajete:

Late archaic across the borderlands: from foraging to farming. 2013. [S.l.]: Univ Of Texas Press.