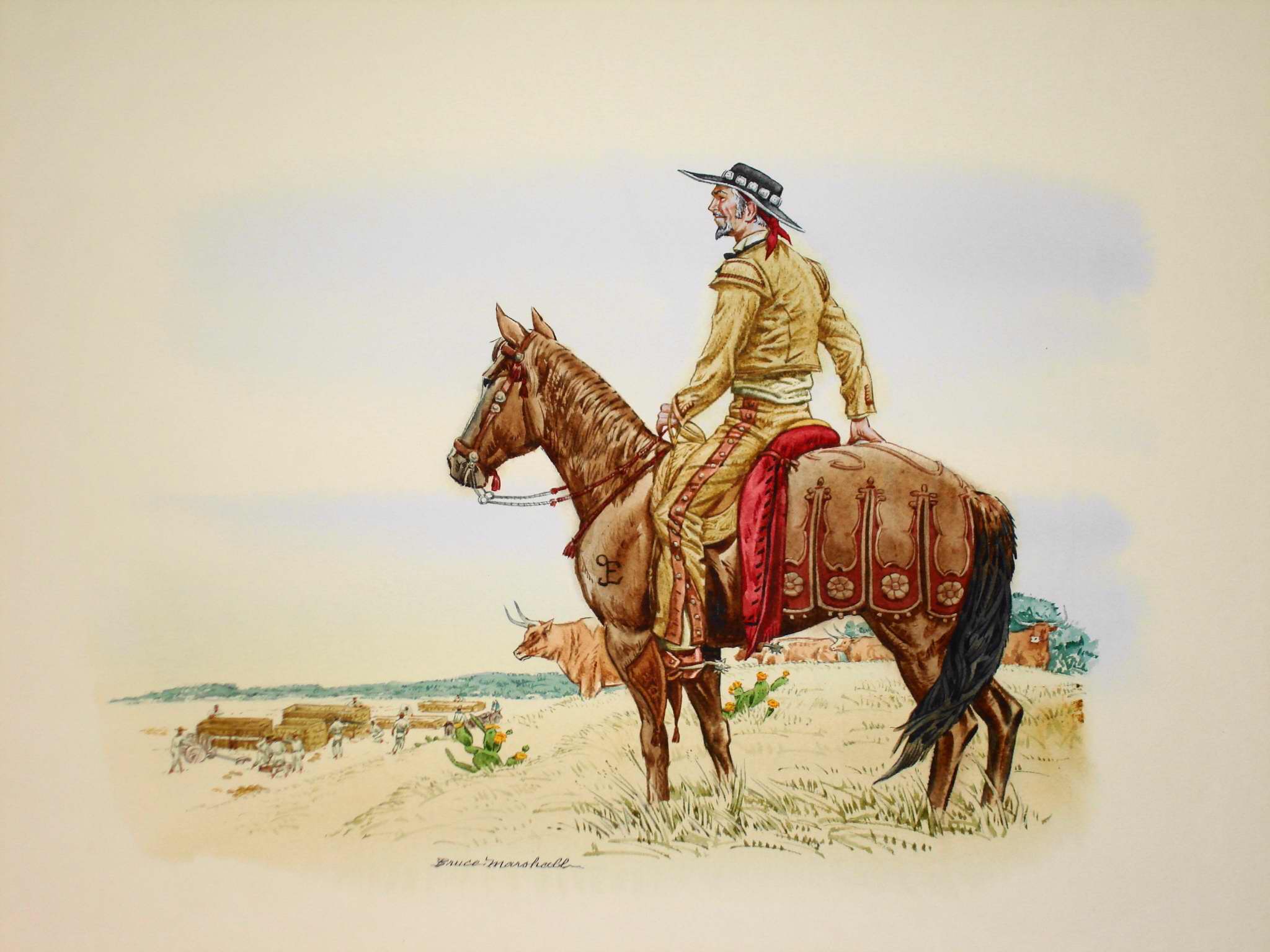 This painting is an original watercolor by Bruce Marshall, entitled “Martin De Leon Building Victoria, TX”. This painting shows Martin De Leon (1765-1833), a Mexican empresario, or entrepreneur, overseeing the creation of the colony Nuestra Señora Guadalupe de Jesús Victoria, today known as Victoria, Texas. In the painting, De Leon sits on a horse that is standing on a hill overlooks the location he chose to build Victoria, Texas, and the scene takes place during the early construction phase of the town. The painting itself was purchased by the museum, and in the scene, there are references to Martin De Leon’s life as the founder of this colony, as well as his business in cattle ranching. In the painting, men can be seen constructing the first buildings of the settlement from wood, with only open fields and vegetation around them, such as cactus, as no other human settlements had been constructed in this territory. The horse De Leon sits on has the brand for De Leon’s family and ranch. The herd of cattle that is grazing in the background of the painting, references to how De Leon made his fortune from the growing cattle industry during the 19th century, and how this would be the main business of the Victoria colony for many years.

In 1765, De Leon was born as a criollo in Burgos, Nuevo Santander, a settlement town during Spain’s colonization of Mexico, and known today as the Tamaulipas district of Mexico. During Spain’s colonial era, a criollo was a Spanish citizen born in colonial territory in the New World. His parents were peninsulares – citizens born in Spain who moved to the New World – who moved from Burgos, Spain to Mexico. As his family came from a Spanish aristocratic background, they had great wealth and access to higher education and relations in Europe. Instead of going to university as his father wished, De Leon chose to become a merchant, starting his career in supplying provisions. In 1790, he joined the Spanish military, assigned to the Fieles de Burgos regiment that was established to defend against Indian raids on Nuevo Santander, achieving the rank of captain in five years.

After marrying his wife Patricia de la Garza, they established a ranch in Nuevo Santander, and began his career as a rancher. After several excursions to San Antonio, he eventually settled a ranch in Texas in 1805, where he saw ranch and farm opportunities in the free open land. He successfully raised cattle and other livestock on his ranch, reaching up to 5,000 cattle head by 1823. De Leon’s family became leaders in the cattle industry, even creating the first cattle brand in Texas. De Leon became one of the earliest Texan cattle drivers, herding a large number of cattle to the New Orleans, Louisiana market.

De Leon wanted to create a Mexican colony in Texas, but for years met resistance from Spanish government officials until Mexico had gained its independence from Spain. By April 1824, De Leon finally succeeded in gaining permission to create a colony in Texas. After completing a business deal in New Orleans, Louisiana, De Leon met with and became friends with a captain of a pirate ship, Ramon La Fou, a Frenchman in exile. The two men made a deal, where Captain La Fou would carry De Leon’s cargo up the Rio Grande River, and De Leon would make arrangements with the Mexican government to give La Fou an official pardon. Both men upheld their sides of the deal and De Leon was able to establish a colony on the lower Guadalupe River. This situation was unique, as De Leon received permission to establish a colony before the Mexican government had created its National and State Colonization laws. As a result, De Leon had no restrictions from the government on how the colony would be created. The money to fund this project came from a $10,000 inheritance from Felipe de la Garza, De Leon’s father-in-law. The colony of Nuestra Señora Guadalupe de Jesús Victoria, later called Guadalupe Victoria, became the only predominantly Mexican colony in Texas during the 19th century.

Map via: University of Houston – Victoria

During the early phase of construction, the houses in the colony were built poorly from materials that were meant to be temporary, until the later construction of sturdier homes that would be longer lasting for the settlers. The De Leon family held great influence and authority in the new colony, as De Leon and his sons managed the affairs of the newly-built colony. Also, De Leon’s wife Patricia managed the family household, making her family an example of high Spanish-Mexican culture and society. Once his sons were older, they were able to manage the colony on their own as businessmen, allowing De Leon himself to focus on his ranch. The colony thrived from the De Leon cattle industry, and by 1880 the colony was said to have 75,000 cattle, worth roughly $1 million. Along with the abundance of food produced from the De Leon ranch, such as beans, corn, potatoes, and other food resources, access to freshwater from the rivers also brought in fish. De Leon worked to make Guadalupe Victoria a thriving colony and settlement, creating a strong community by building schools and Catholic cathedrals for the predominantly Catholic community. De Leon also dreamed of creating a magnificent Catholic cathedral that would rival the cathedrals in Mexico. Before the construction of this dreamed cathedral could even start, Martin De Leon died from a Cholera epidemic that went through the settlement in 1833. He was buried at St. Mary’s Cathedral. Some scholars believe that his burial may be actually underneath the church, as construction was completed after his death with funding provided by his wife Patricia. Others argue that the cathedral foundations had been laid before his death, during the early construction phase of the Victoria colony.

By the time of his death in 1833 from cholera, he had accumulated a wealth of half of $1 million, which he left to his family. The De Leon family held primary control over the settlements in present-day Victoria County until the end of the Texas Revolution in 1836. Although the De Leon’s supported the Texan forces by providing supplies and refuge to them, they faced discrimination from white settlers that moved into Texas. Eventually, the De Leon family lost its influence in Victoria, along with their land and cattle, leaving Texas to settle in Louisiana, only to have to return to Mexico. The contributions of the De Leon family in building Victoria, Texas went unacknowledged until 1936 when a monument was built in memory of Martin De Leon in the Evergreen Cemetery in Victoria. In 1972, State Historical markers were erected in memorial to Martin De Leon, his wife Patricia, and their four eldest sons. [Caitlin VanWie, edited by Kathryn S. McCloud]