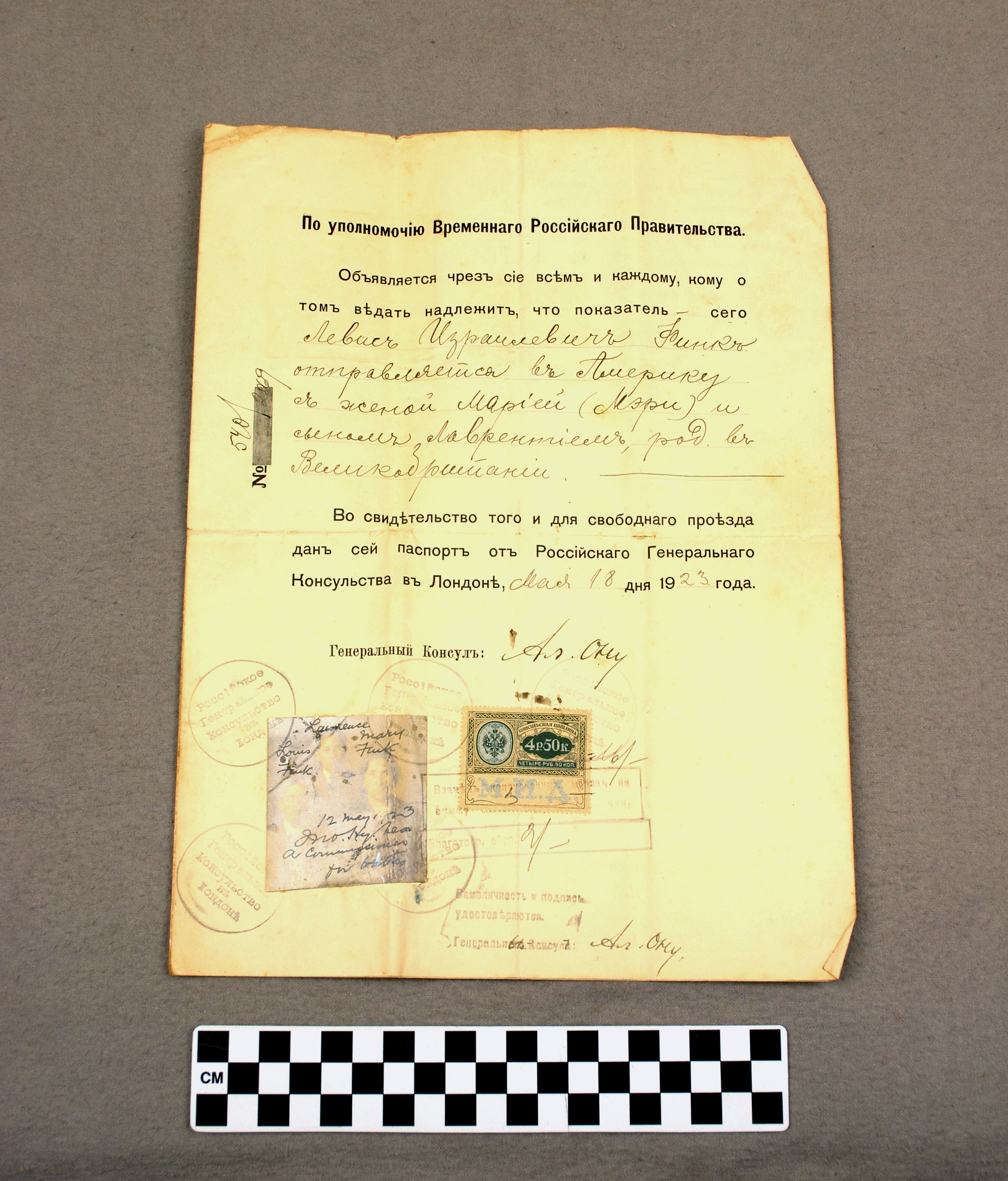 This object is a passport that once belonged to Louis and Mary Finkel. This document helped allow the Finkel family to move from Russian controlled Lithuania to the United Kingdom in the early 1900s. They lived there for 16 years before finally immigrating to the United States and settling in Luling, Texas. Passports have been around for hundreds of years, and are important documents required for international travel. In the United States the first passports were issued around the time of the American Revolution. The passports were used to the people going to France with Benjamin Franklin.

In order to travel abroad United States citizens, are required to have a passport. Passports are needed for international travel by air, sea, or land. Today there are two different kinds of passports. Today there is the traditional passport book and a passport card. However, there have been many different types of passports over the years. While a passport book can be used for all types of international travel by air and by sea. The passport card is used for travel between the United States, Canada, Mexico, the Caribbean and Bermuda at land border crossings or sea ports-of-entry. This card is not valid for international travel by air. A passport card is a good alternative for people living on the border and don’t want to spend the money on a passport book. A passport’s main objective is to identify a traveler as a citizen with a right to protection while abroad and a right to return to the country of his citizenship.

Louis Finkel, immigrated to the United States to join his brother Max in Luling, TX where he opened a dry goods store. Louis ran the store with his sons Harry and Larry Finkel, who later took over the business on their own, operating it through the 1960s. Lulling held a large Jewish population, but slowly the families moved away. The Finkels were one of the last remaining Jewish families in Luling. Today the dry goods store building is no longer exists, after being destroyed in a fire in the year 2000. The lot however, is now used as the location for the watermelon seed spitting contest in the annual Watermelon Thump Festival.

For information about attaining a U.S. passport, the Finkel family and Luling, Texas visit the links below. [Rebecca Gonzales, edited by Joscelynn Garcia]

Robertson, Craig. The Passport in America The History of a Document. New York: Oxford University Press, 2010.