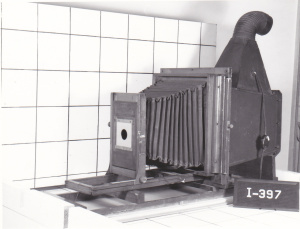 This object is a photo enlarger that was used by Zintgraff Studios, a commercial photography studio in San Antonio in the mid-2oth century. A photo enlarger was used to make a larger negatives or a photographic print from the negative image created by the camera on to its film. A negative is the image that the camera captures on film. When looking at a negative of a picture the shades of the people, places or in the image are opposite to what they are in reality. Light colored objects are dark, and dark colored objects are light. A photo enlarger is a tool photographers used to enlarge a negative before developing the prints.

The many of the photographs taken by the Zintgraff Studio were donated to the University of Texas at San Antonio and are stored at the Institute of Texan Cultures in the Special Collections Library. One can find the digital uploads on the University of Texas at San Antonio’s Library’s Special Collections website. The photographers at Zintgraff Studios captured over a thousand unique images of San Antonio between 1930 and 1980. The photographers took pictures of the river walk, one of the center points of San Antonio. They captured pilots conversing by their planes at Kelly Field, which was a critical aviation base throughout both World Wars, as well as the celebrations held for the soldiers after the war. One picture captures a homecoming party for a general who returned from commanding the sixth army, which was in the South Pacific Theater during the war, which means the sixth army was in the Southern Pacific, around New Guinea. The sixth army helped isolate a Japanese base, and joined forces with the Australian Army and other U.S. forces near New Guinea in 1943. After General Walter Krueger came home on February 13, 1946 his family and friends through him a welcome home banquet at the Gunter Hotel.