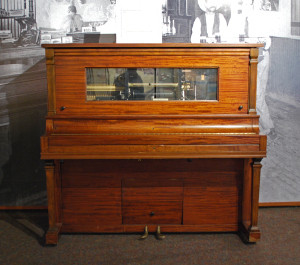 A player piano is a piano that plays itself.  A roll of music was created with punch holes in a specific pattern.  When the roll fed through a reader on the piano, a mechanism would interpret the punch holes as musical notes, and the piano would play itself- like a music box.  Player pianos were hugely popular from about 1900-1930.

In the late 1800s, music was the most popular form of entertainment.  People would attend orchestra concerts or traveling Vaudeville– or variety- shows, and many people had pianos in their homes.  Although there were many talented musicians at the time, there was always a demand for live music at home parties, even if there wasn’t a talented piano player on hand.

In 1896, the first self-playing piano was introduced by Edwin Scott Votey, who invented the pianola– another word for a player piano- in his home workshop in Detroit, Michigan.  Early models of the pianola were cabinet-like boxes that were sold as add-ons to traditional pianos.  It wasn’t until 1902 that the self-playing mechanism was installed into the actual pianos, and by 1916, 60% of all pianos sold were player pianos.  Some music rolls even included the words to the songs in the margins, encouraging sing-alongs at parties.

Initially, pianolas were marketed to rich buyers, with models costing around $250 (today that would be about $6000).  Soon, cheaper models were launched, with a standard 65-note format.  This excluded the 6-note range at each end of the piano keyboard, but was able to hit most standard notes.  The Buffalo Convention of 1908 standardized roll formats, and broadened the key range to include all 88 notes on the piano keyboard.

Around this same time in Germany, an inventor named Edwin Welte developed a much more advanced version of the player piano, known as a reproducing piano.  The reproducing piano allowed for a much more sophisticated sound, allowing for automatic adjustments in expression and volume of notes, reproducing the original performance of an artist.  These models were very much the first sound recorders for music.

With this new advanced sound, many famous composers of the day- from Scott Joplin, Jelly Roll Morton and George Gershwin, to Claude Debussy and Sergei Rachmaninoff– were able to record their music specifically for the reproducing pianos.  People were able to enjoy anything from classical music to ragtime in their own homes.

With the Wall Street crash of 1929, interest in player pianos effectively came to an end.  Radios became a household convenience, and people found other forms of entertainment.  However, in the 1960s, there was a renewed interest in player pianos, and Aeolian– one of the largest manufacturers of player pianos- even produced a modern version.  Many households, including the donors of this piano, enjoyed the player piano at parties all the way through the 20th century.  [Carrie Klein, edited by Kathryn S. McCloud]