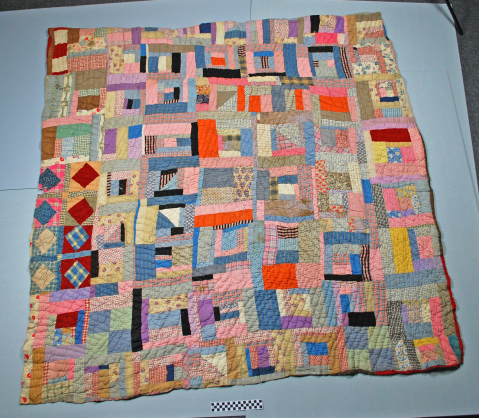 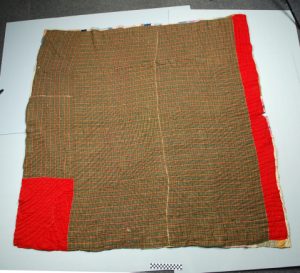 This object is a quilt, made in the 1950s, in the African- American tradition of quilt-making.   An appraiser from Antiques Roadshow was able to identify it based on the style, construction, and materials used.  It appears to be hand-quilted and pieced, assembled in the strip construction technique, in which strips of scrap fabric were sewn together to create a pattern.

African textile traditions have not been well-documented in comparison to other types of folk art, however, it is thought that their origins can be traced back to four civilizations of Central and West Africa.  In Africa, most textiles were made by men.  It wasn’t until African slaves were brought to the United States that women took over the tradition, with work being divided based on Western gender roles.

Large shapes and bright colors were used in African tribes to distinguish people from far distances.  The ability to identify different warring tribes or hunting parties was crucial to survival.  This use of bold colors and oversized shapes has endured in African- American textiles.

Combined with that is a distinct tradition of asymmetrical patterns and improvised designs.  There are many reasons for this.  The ability to change or alternate the pattern allowed quilters to get the most use of scrap fabrics, as opposed to a repeating pattern, that required specific colors in set quantities.

More importantly, breaks in patterns held  great symbolism for African cultures.  A break in pattern could symbolize rebirth in the power of the wearer or creator of the quilt.  Pattern breaks were also believed to keep away evil.  It was believed that evil traveled in a straight line, and by breaking the pattern, evil spirits would become confused and be slowed down.  Improvising the patterning also ensured that the pattern could not be copied, and gave the creator and owner and strong sense of ownership and creativity.

Once in the United States, African quilts took on even more meaning.  Many women would create story quilts, in which they would applique pictures onto their quilts.  By doing this, they could record their family history- like a photo album- or tell a story in pictures. One of the most famous women to create story quilts was a freed slave named Harriet Powers.  In 1896, she created an intricately-crafted quilt which she entitled “Bible Quilt”, depicting several Biblical stories.  In 1898, she crafted the “Pictorial Quilt”, illustrating three rows of Bible stories, historical events, and significant weather anomalies.  The “Pictorial Quilt” now hangs at the Museum of Fine Art in Boston, and the “Bible Quilt” is housed at the Smithsonian Institution.

Few examples of African- American quilting tradition have survived through the years.  They were considered necessities rather than luxuries, and most were worn out.  However, men and women of African descent have kept the essence of the traditions alive, and are illustrated in pieces such as this quilt from the 1950s.  What was once  simply a functional piece of bedding, we know know is artistry to be preserved and celebrated. [Carrie Klein, edited by Kathryn S. McCloud]