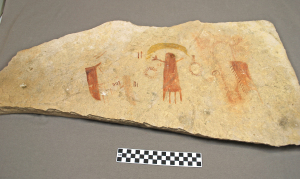 This object is a reproduction of a rock painting found at Bonfire Shelter near Langtry, Texas. There is evidence of human presence at the site as far back as 12,000 to 14,000 years ago, at the end of the Pleistocene era. Bonfire Shelter, and other rock shelters in the Lower Pecos area have a long history that continues to be a part of archaeological investigations today.

Bonfire Shelter’s importance was initially discovered by a high school student named Michael Collins. Collins was visiting the area with family when he went to go explore the rocky outcrop. Having read about archaeological excavations, Collins attempted to dig in a similar way to archaeological digs. After making a square hole and digging past a layer of cave dust and rock, Collins found charred bone a foot below the surface. He soon found a jaw bone that he thought belonged to a cow and took it to Glen Evans, a paleontologist and family friend. Evans determined that the bone belonged not to a cow but to a bison and the landowners began to look into an archaeological investigation.

In 1962 the area surrounding Bonfire Shelter was chosen as the future site of the Amistad Reservoir. Mark Parsons from the Texas Archaeological Salvage Project was sent in to determine if the area could be flooded. Almost immediately Parsons found artifacts, like a Montell style dart point which dated the bison bone layer to the late Archaic Period, roughly 2,500-3,000 years ago. As the investigation continued, evidence indicated that Bonfire Shelter was the site of a bison jump. Bison jumps were areas where bison were herded off a cliff and down onto a rock pile in front of the shelter where they were then butchered. Archaeologists realized that this bison jump site was the oldest known in North America as well as the furthest south.

Cave painting of horse in the Lascaux cave. Image via WikiMedia Commons.

The rock art found in the Bonfire Shelter area is an example of the Lower Pecos rock art style. Rock paintings go back thousands of years. Until recently, the oldest cave paintings were found in Spain and France and dated at 30,000 to 32,000 years old. In 2014 a new discovery pushed the oldest known painting back to 35,400 years old and was found in Sulawesi, Indonesia. There are even older paintings of abstract unidentifiable objects, which have been dated to 40,000 years old.

Today, Bonfire Shelter and the surrounding area is a part of the Seminole Canyon State Park. The park is named after Lieutenant John L. Bullis’ Black Seminole Scouts who were descendants of runaway slaves. This area sports some of the oldest known rock shelters in North America as well as some of the oldest rock wall paintings or pictographs, which can be seen on guided hiking tours today. [Briana Miano edited by Joscelynn Garcia]