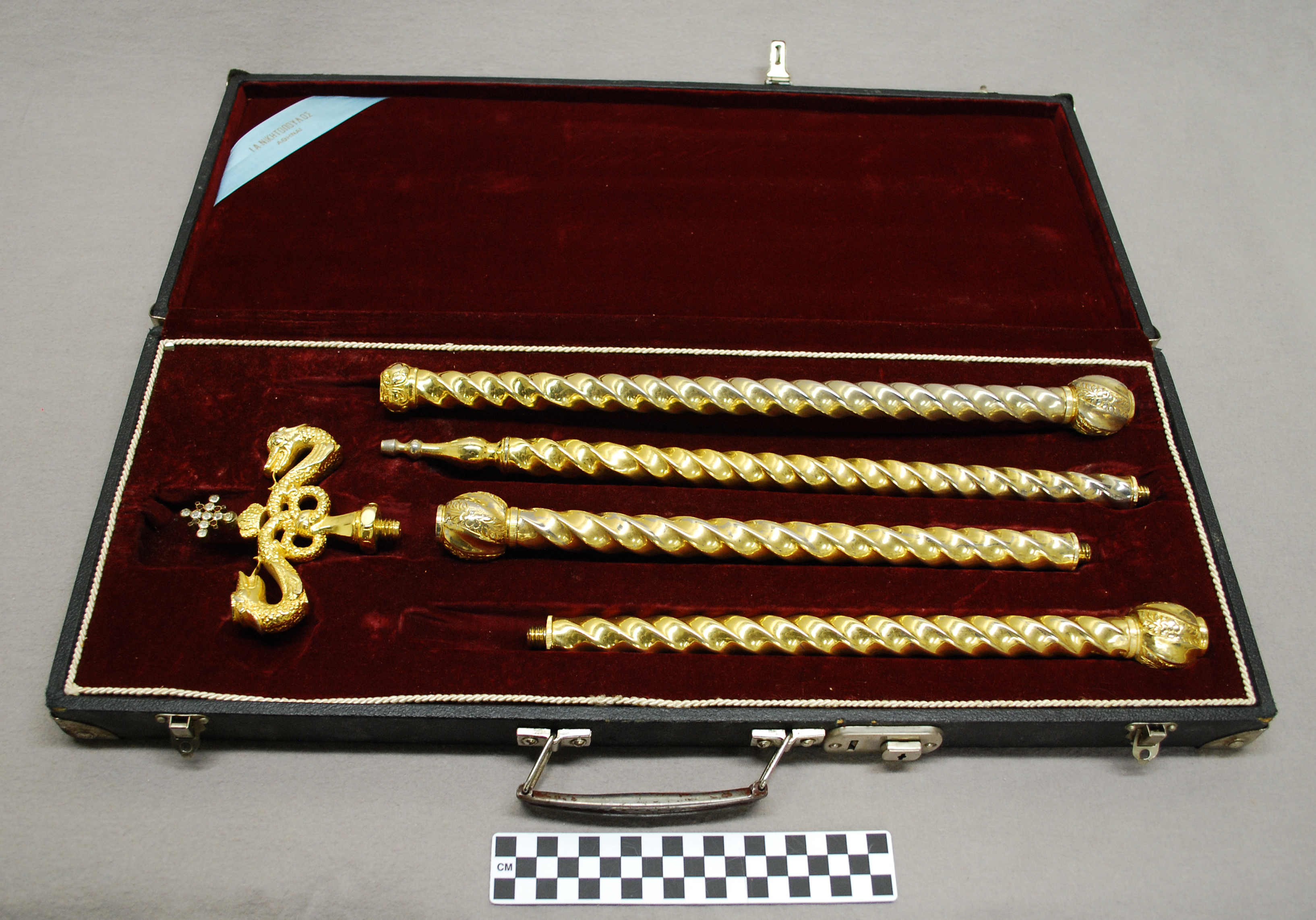 This object is a staff that was used by Bishop John (Kallos) of Amorion of the Greek Orthodox Church. This particular staff is called a crosier which is a stylized staff that represents the Orthodox Bishops and senior monastic officers and is a symbol of their jurisdiction and authority.  This particular staff is in five pieces, with four of them making up the actual staff and then the fifth is the staff head which is two intertwining snakes with a crown and cross above. The cross is made up of 9 crystals with 5 of them in a vertical line and 2 crystals on the left and 2 on the right forming the arms of the cross. There are also 8 red crystals on one side and 8 green crystals on the other side.

The two intertwining snakes on the staff head piece are generally associated with the story of Moses and the Bronze Serpent. In Numbers 21:4-9, Moses is told to put a bronze serpent on his staff and when those who are bitten by snakes look upon this symbol they will be healed. The serpents are to represent the duality of the serpent that it both can kill and heal. The serpents on the staff are also associated with Exodus 4, where God turns Moses’s staff into a serpent and when Moses grabs it, it becomes a staff again. Exodus 7:8-13 is also related, as it recounts how Aaron’s staff is turned into a serpent and the Pharaohs’ Magicians do the same with their staffs, but Aaron’s staff/serpent devours the the Magicinans’ staffs/serpents. There are several more references to serpents in the Bible and this entry by Jonathan Pageau from the Orthodox Arts Journal gives a more in depth look at how serpent imagery is associated with the Orthodox crosier.

When a Bishop is consecrated, he is given his crosier by the chief concentrator following the dismissal at the Divine Liturgy. The Divine Liturgy is the primary worship service that takes place in the Orthodox Church. Senior monastic officers are also given a crosier when they are consecrated, these positions are Archimandrite, Abbot, or Abbess. An Archimandrite is just below a bishop in authority and in the Orthodox tradition he is head of several monasteries. An Abbot is in charge of a single male monastery and an Abbess is the head of a single female monastery. For the Archimandrite, Abbot, and Abbess the crosier is conferred at the time they are invested with their position. When a Bishop is in his vestments of office he carries the crosier, except into the altar itself. When the Bishop enters the altar, he leaves the crosier placed against the iconostasis next to the icon of Christ to the right of the Royal Doors. When the Bishop is not wearing his vestments, he carries a smaller walking stick that is topped with a silver pommel.

Bishop John of Amorion was the first American-born man to be selected and ordained bishop of the Greek Orthodox Church in 1971. He was ordained as the Bishop of Thermon in Houston, Texas, and appointed to administer the Eighth Archdiocese District of the Greek Orthodox Archdiocese of America. He was born in Chicago, Illinois, but raised and educated in the greater Boston area. He attended several religious and theological universities and became a deacon of the Greek Orthodox Church in 1955. He served as the Auxiliary Bishop in Houston, TX from 1971-1973, but moved the the regional headquarters to Denver, CO in 1974 and served there till 1977. In 1978 he became the Diocesan Bishop in Charlotte, NC and served there till 1980, when he moved to Atlanta and remained the Bishop till 1988 when he retired due to ill health. Even though Bishop John of Amorion was retired he was still an active member in the church till his death on December 1, 2012. [Jennifer McPhail]

Callinicos, Constantine N. 1953. The Greek Orthodox catechism: a manual of instruction on faith, morals, and worship. New York: Published under the auspices of Greek Archidiocese of No. and So. America.