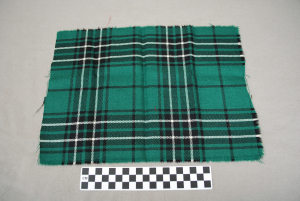 The Maclean of Duart Hunting Tartan. Image via http://www.clanmacleanatlantic.org

Today, tartans continue to be made and in the last fifty years have become an increasingly profitable business dominated by a few large mills. The tartan continues to be a representation of Scotland as much as kilts and bagpipes are. People continue to connect their genealogical history to their ancestral clans and the corresponding tartans. Clans continue to meet in reunions in Scotland, and Highland Games around the world to this day. [Briana Miano edited by Joscelynn Garcia]

Innes, Sir Thomas. The Tartans of the Clans & Families of Scotland. Edinburgh, Scotland: Johnston and Bacon, 1971.

MacLean, L. A Historical and Genealogical Account of the Clan Maclean, from its First Settlement at Castle Duart in the Isle of Mull, to the Present Period. Edinburgh, Scotland: Laing & Forbes, 1838.