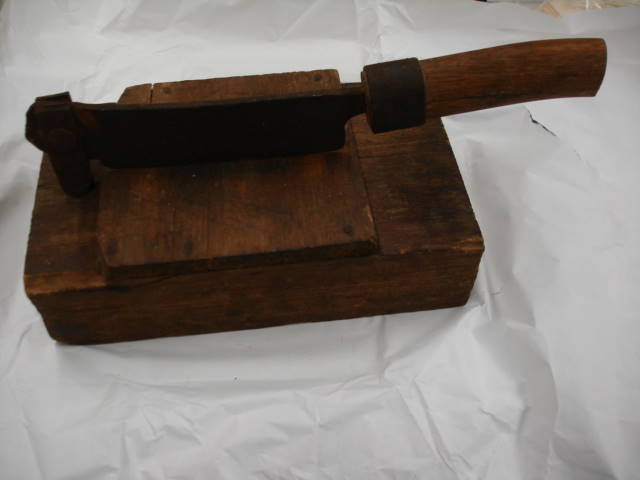 This item is a tobacco cutter used to cut the leaves of tobacco plants while processing the plant for use. In the Americas, tobacco has been used since ancient times. When Europeans first arrived they became intrigued with tobacco and later brought it back to be grown and sold across Europe. In Texas and neighboring areas, the Spanish observed tobacco use by Native Americans. They witnessed them chew and smoke tobacco out of pipes and as cigars. The Native Americans used tobacco in a various ways but it was primarily used during ceremonial rituals and prayers. Centuries later tobacco is mass produced in nearly every part of the world. In Texas, the tobacco industry thrived until World War I and the Great Depression. Afterward the one of the only tobacco companies that succeeded was Finck Cigar Company. The company was founded in 1893 by a German immigrant in San Antonio. Despite several economic recessions, the company is still in production today, manufacturing cigars, pipes, and accessories.

Tobacco, itself, is a plant that grows naturally in the Americas (North, South, Central America, and surrounding islands). What you might not know is that the tobacco plant and the use of tobacco goes back a long time. In fact it is believed that tobacco may have been domesticated over 6,000 years ago! When exactly ancient people started to use tobacco is unclear. However, we do have plenty of evidence that the ancients did use tobacco.

Reproduction of a Maya priest smoking from the Temple at Palenque, Mexico. Image via Wikimedia Commons.

Much of our information on tobacco use in ancient America comes from ancient Maya sources. The Maya were a complex society, with their own writing system, organized religion, and advanced architecture. In many of the buildings they constructed they used art to represent their daily lives, their gods, and religious rituals. In the city of Palenque, Mexico at the Temple of the Cross a carving was found which shows an old man smoking tobacco from a long pipe. It is believed that this could represent a prayer to the sun god to bring rain during the dry season.

Most tobacco use among ancient Native Americans was limited to shamans, or medicine-men. Maya shamans used tobacco to encourage a trance-like state. While in this trance, they believed that they were able to contact spirits, dead relatives, or gods. Even modern doctors characterize tobacco as a drug and believe it to have some hallucinogenic properties. Ancient shamans believed that they could gain supernatural knowledge about healing, warfare, hunts, and many other things while under the influence of tobacco. The Maya also believed that their lords and gods would use tobacco to travel from the heavens and underworld to the real world. Maya art often shows these gods smoking a cigar or smoking from a pipe.

Shamans in North America also used tobacco in religious activities as well. Many Native American tribes religions included the use of tobacco in their ceremonies. Smudging is a common practice amongst many native tribes of North America. This ceremony uses smoke, made by smoldering a variety of dried plants. Smudging uses tobacco, sage, cedar, sweet grass, juniper, or other aromatic materials to heal, cleanse, purify, and and bless people, items and locations. [McKayla McCarty, edited by Jennifer McPhail]

The following video shows dancers at a modern Pow Wow being blessed by smudging as they enter the dance arena.

Additional Resources:
Driscoll CA, DW Macdonald, and SJ O’Brien. 2009. “From wild animals to domestic pets, an evolutionary view of domestication”. Proceedings of the National Academy of Sciences of the United States of America. 106: 9971-8.

Spinden, Herbert Joseph. 1950. Tobacco is American; the story of tobacco before the coming of the white man. New York: New York Public Library.