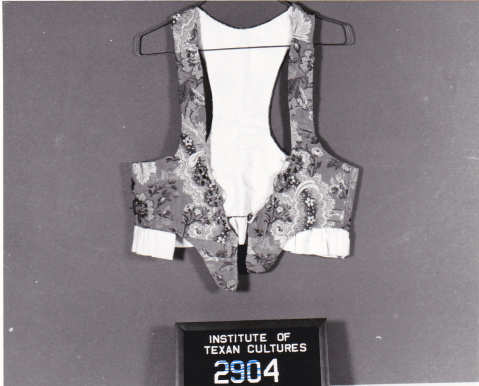 This object is a Swedish women’s vest.  It is part of a traditional costume made in 1922 in County Skane, Sweden.  Costumes like this can still be seen worn by women of Swedish descent during celebrations of Swedish culture.

The first Swedish immigrant to enter Texas was Swen Magnus Swenson in 1838.  He was an entrepreneur who started many businesses throughout his life, and founded SMS Ranches in west Texas- consisting of more than 300,000 acres.  He became a wealthy man due to his cotton plantation, and in 1844, he was joined by his uncle- Swante Palm– who was the first person to emigrate from Sweden with the goal of living in Texas.  Up until that point, most Swedish immigrants entered through Ellis Island in New York and established communities in the Northeast and Midwest.

In 1848, Swenson was convinced by his friend, Sam Houston, to bring more Swedish families to Texas.  The first group he brought over consisted of twenty-five people, mostly family and friends.  Swenson and his uncle then began operating an informal immigration company, initially paying people’s travel expenses to Texas from Sweden.  In turn, these people would pay back their credit by working as indentured labor on Swenson’s ranch.

By 1850, Swenson sold his ranch in west Texas and purchased 100,000 acres around Austin.   He continued his efforts in immigration throughout his life, establishing the strongest concentrations of Swedish-Americans, first around Austin, then fanning out to Dallas, Ft. Worth, and Waco.

People left Sweden mainly for economic and political reasons.  Population growth made farmland scarce, and the overpopulation made it nearly impossible for families to support themselves.  Another factor was the growing resentment against the Swedish Lutheran State Church, which was repressing the citizens and emphasizing the snobbery of the Swedish monarchy.  As with most other immigration groups, the promise of personal freedom, open spaces, and uncharted land attracted many to a new life in Texas.

By 1900, more than 4,000 Swedes were in Texas.  They proved to be hardworking and successful in business as well as ranching and farming.  Swedish immigrants were responsible for building churches and colleges, including Texas Wesleyan College in Austin and Trinity Lutheran College in Round Rock.

More than 160,000 Texans claim Swedish ancestry today.  Through organizations such as the Linneas Society, Vasa Lodges, New Sweden Cultural Heritage Society, and the Scandinavian Heritage Foundation, Swedish-Americans have both assimilated to the United States cultures, and kept their heritage alive.  These organizations were designed to give support to new immigrants, help them learn English, and provide an extended family in a new land.

Today, these organizations strive to provide education about Swedish culture, and preserve their heritage.  Though the Swedes of Texas value the culture of their homeland, they also embrace their life as Americans, and most prefer to be known as Swedish-Americans. [Carrie Klein, edited by Kathryn S. McCloud]