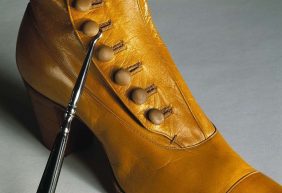 Women’s boot from 1899 with boot clasp.
Image by Birgit Brånvall, via Wikimedia Commons.

An essential household item in the Victorian era, used on everything from garments to shoes. A button hook was an ideal tool to have on hand when needing to button a difficult button. In the Victorian era clothing, including shoes were worn tighter than clothes today and as close to the body as possible, with many buttons and laces to hold them in place. Shoes and articles of clothing of this style often needed a button hook to help fasten them. Particularly when the buttons were spaced fairly close together. So, a button hook was a good device to have. It was a small tool with a handle that had a long metal hook attached. The hook itself came in different diameters ranging from ¼ inches loops to ⅜ inches loops for larger buttons. 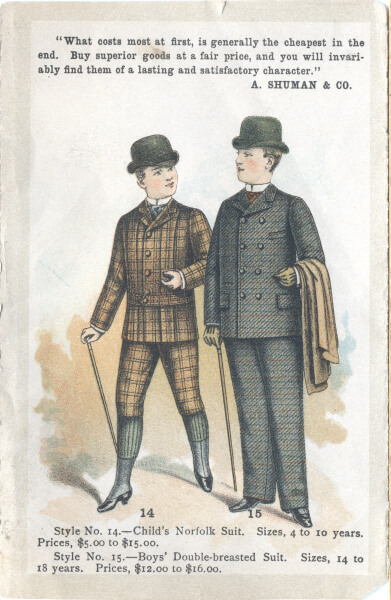 A. Shuman and Co.
Image from Miami U. Libraries – Digital Collections, via Wikimedia Commons.

Introduced in 1611 in France, it was used throughout Europe and patented in 1876. It was described in the patent as “an instrument to facilitate the buttoning of shoes, gloves and like purposes.” Men were the first to have a need for this tool when wearing spats, also known as spatter dashers, and gaiters were popular men’s fashions. The gaiter, which was made of cloth or leather went on top of the shoe like a wrap or covering. The buttons on the gaiter helped to keep it in place and the button hook was used to aid in fastening the small buttons. Women’s shoes at that time resembled men’s spats but with a higher heel. They were buttoned up past the ankle, often with more than 6 buttons. Button hooks were an important tool for changing one’s shoes in Victorian times.

Portability of a button hook was essential when traveling. Most shoe manufactures also produced a button hook that was included with the shoe and had the name of the manufacturer printed on them. Some shoes even had a small pocket or loop inside the shoe for keeping a hook, in case of any emergencies.

The button hook currently in the collections here at the Institute of Texan Cultures came with an past. Donated to the museum in 2004 along with several other items, it was donated by a former electrician who worked at the notorious Chicken Ranch Brothel. The Chicken Ranch operated in La Grange, TX from 1905 to 1973, and was the inspiration for the movie “The Best Little Whorehouse in Texas,” and the song “La Grange” by ZZ Top. It isn’t entirely clear if the donor got the button hook from the brothel but, it definitely would have been a handy tool for buttoning up corsets and tight-fitting dresses. 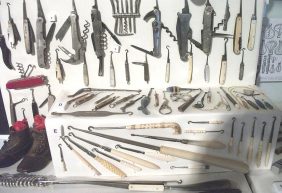 Pocketknives with buttonhook attachments, plus folding buttonhooks, on display at Bedford Museum.
Image by Simon Speed, via Wikimedia Commons.

Though this little device does not seem to be much, they have become very popular with collectors and there are even conventions held about these handy instruments. Collectors go in search of various types of button hooks made with different materials, such as handles made from mother of pearl, wood or brass. They are also looking for more ornate highly decorated handles, or some just collect to have one from all over the world.

Devices such as these may not be common anymore, but they could be handy for people who have difficulty using their hands. There are more modern types of button hooks available today made for the elderly or people with arthritis.