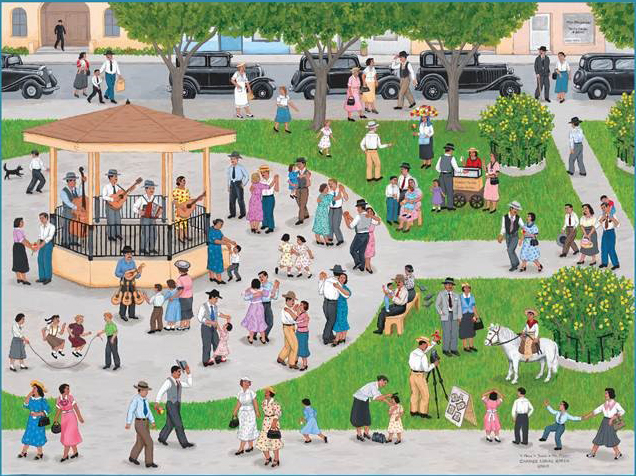 This object is a painting entitled “A Plaza in Texas in the 1930’s” by artist Carmen Lomas Garza, a Chicana narrative artist, inspired by the Chicano Movement, Carmen’s painting depicts every day events in the lives of Mexican-Americans. Her paintings are based on her memories and experiences of growing up in South Texas. Carmen Lomas Garza was born in Kingsville, Texas in 1948. At a very young age Carmen knew she wanted to be an artist and pursued every opportunity to improve her skills. At the age of 13, she taught herself how to draw and learned about the basics of art by checking out books from her local library. She also practiced drawing every day and drew pictures of people she saw at school, at home, and in her neighborhood.

Carmen is a graduate of the Texas Arts & Industry University (now known as Texas A & M University-Kingsville), Juarez-Lincoln/Antioch Graduate School, and San Francisco State University where she earned her Master of Art in 1981. She is the recipient of numerous awards and has exhibited her work in galleries and museums across the United States, including the Smithsonian American Art Museum. In 1990, Childrens Book Press published a bilingual book which focused on Lomas Garza’s paintings and short stories. The book, entitled Family Pictures/Cuadros de Familia shows paintings and text depicting what it was like growing up in a small South Texas town in a Mexican American family. Carmen Lomas Garza stated, “The pictures in this book are painted from my memories of growing up in Kingsville, Texas, near the border with Mexico. This is my book of family pictures.”

Since 1996 there have been three more books published using Carmen’s paintings they are titled In My Family/En Mi Familia, Magic Windows/Ventanas Magicas, and Making Magic Windows:Creating Papel Picado/Cut-Paper Art with Carmen Lomas Garza. The books have been incredibly popular selling more than 700,000 since the year 1990.

In most of her paintings, like this one, Lomas Garza uses “monitos” or little figures. These little figures are how she portrays her family, neighbors, and even pets. This painting shows different monitos at a plaza. The figures show couples dancing, children playing and families out together. The most important theme in Lomas Garza’s paintings tend to be family. Her paintings focus on family traditions and values. Some of her paintings include images of families out at a birthday party, quinceañera, having dinner, or at a tamalada. Lomas Garza stated, “Every time I paint, it serves a purpose–to bring about pride in our Mexican American culture. My art is a way of healing… like the sávila plant heals burns and scrapes when applied by a loving parent or grandparent.”

Today Carmen Lomas Garza does speaking events, and hosts workshops, she also still paints and her artwork can be found in a variety of different exhibitions, including the Los Tejanos exhibit here at the UTSA Institute of Texan Cultures. The Los Angeles Unified School District has named a primary school after her called Carmen Lomas Garza Primary Center, which she says has been the greatest honor.