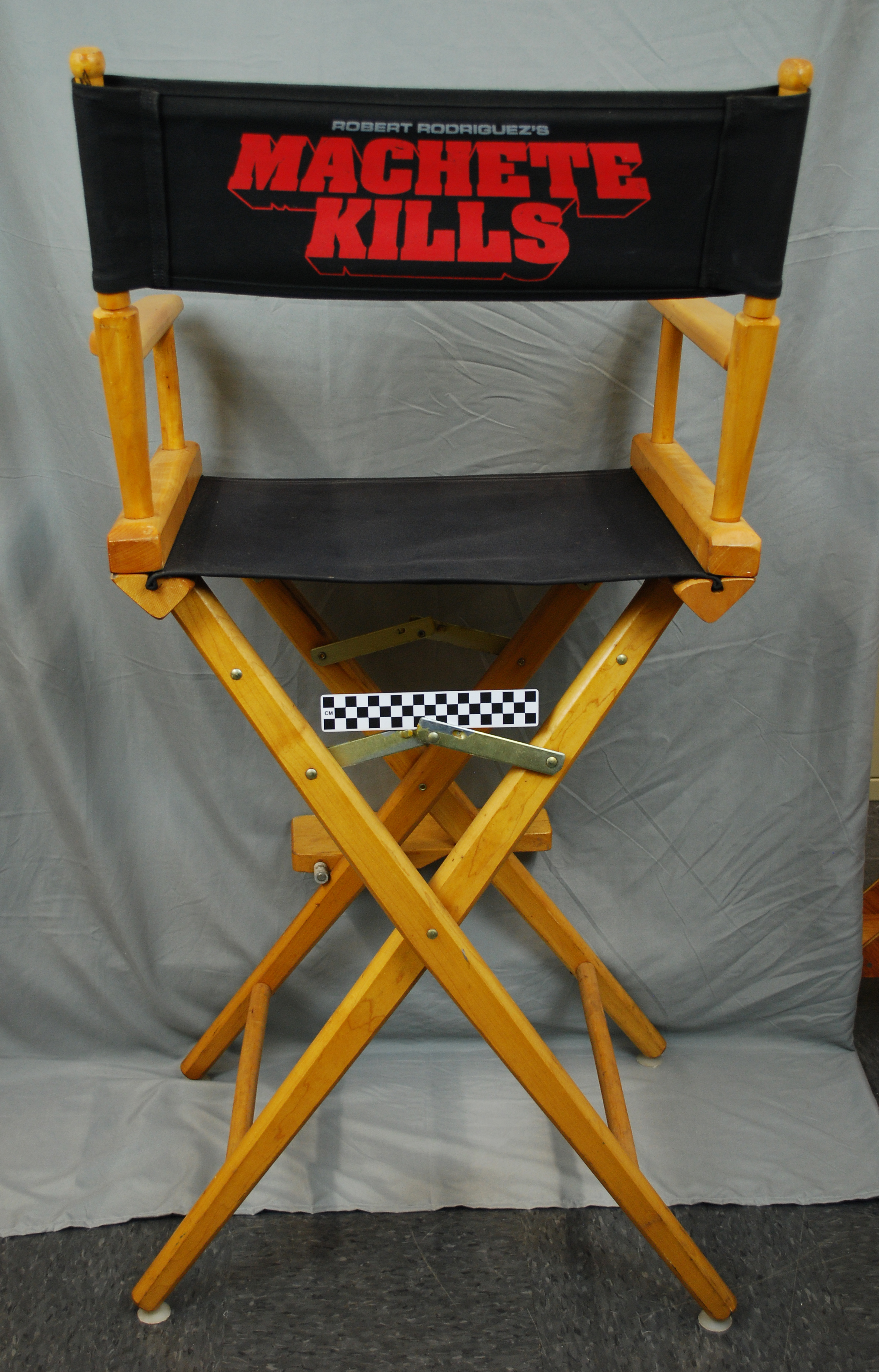 Going to the movies is one of the most popular leisure activities in the United States. Getting a film made and in a theater near you requires a long list of people who work together to make it happen. A person who plays a major role in the film making process is the director. The director of a film has control of what the film will eventually become. Film directors have many responsibilities that range from choosing the actors, to making sure the film stays on budget. This object is a film director’s chair used by Robert Rodriguez during the filming of Machete Kills.

Robert Anthony Rodriguez is a film director, screenwriter, producer, cinematographer, editor, cartoonist and musician. Rodriguez was born in San Antonio, Texas in 1968 to Rebecca Villegas and Cecilio G. Rodriguez, both of Mexican descent. As the middle son, in a family with 10 children, Robert always stood out. His mother would take him and his siblings to the Olmos Theatre to watch classic films starring Charlie Chaplin and Buster Keaton. It was during these outings that a young Robert Rodriguez was inspired and knew that he wanted to make movies. Robert made his first films using an old Super-8 camera he found that belonged to his family. With this camera Robert made all types of films. Using his family as the cast and household items as props, Robert experimented with creating action, sci-fi and even stop motion films.

In the 1980’s, Rodriguez’s father purchased him a video camera that recorded to tapes that could be played in a VCR, the latest form of film technology at the time. He uses these tapes to screen his movies for his friends and family, quickly becoming known around the neighborhood as the “kid who makes movies.” Following High School, wanted to attend the Communication College at the University of Texas, but a low GPA threatened his admittance. He created and submitted a film trilogy called Austin Stories as part of his application, the trilogy beat out some of the top students and he was accepted. Once in the film department, Rodriguez used $400 of his own money to come up with his biggest film at the time entitled Bedhead. The film went on to win an number of prizes at film festivals.

After receiving such positive reviews for his film Bedhead, Robert knew his dream of becoming a filmmaker could be possible. In order to finance his first feature film Robert decided to sell his body to science, and participated in multiple medical studies. With the money he made as a medical research volunteer and the help of his friends, Rodriguez began his first feature length picture entitled El Mariachi. The film made its way to the Sundance Film Festival where it became an instant favorite. This film is often credited for launching Robert Rodriguez’s career getting him a deal with Columbia Pictures.

Following the film El Mariachi, Rodriguez worked on other films including Roadracers and cult classic From Dusk Till Dawn. Rodriguez later made a sequel to El Mariachi, called Desperado, and although it was not as well received as El Mariachi, it did help launch the careers of Selma Hayek and Antonio Banderas on the American film scene. Robert Rodriguez’s most successful film was also the least expected. Throughout his career Rodriguez was known for his adult action films, but that changed when he wrote and directed Spy Kids in 2001. Spy Kids had so much success it became a movie franchise and was followed up by two more films.

The chair shown above was used during the filming of Machete Kills the sequel to the popular film Machete starring Danny Trejo. Today Robert Rodriguez is still working on films and has made a crossover into the television scene, recently launching the El Rey Network in 2013. His latest project is a TV series adaptation of his film From Dusk Till Dawn.