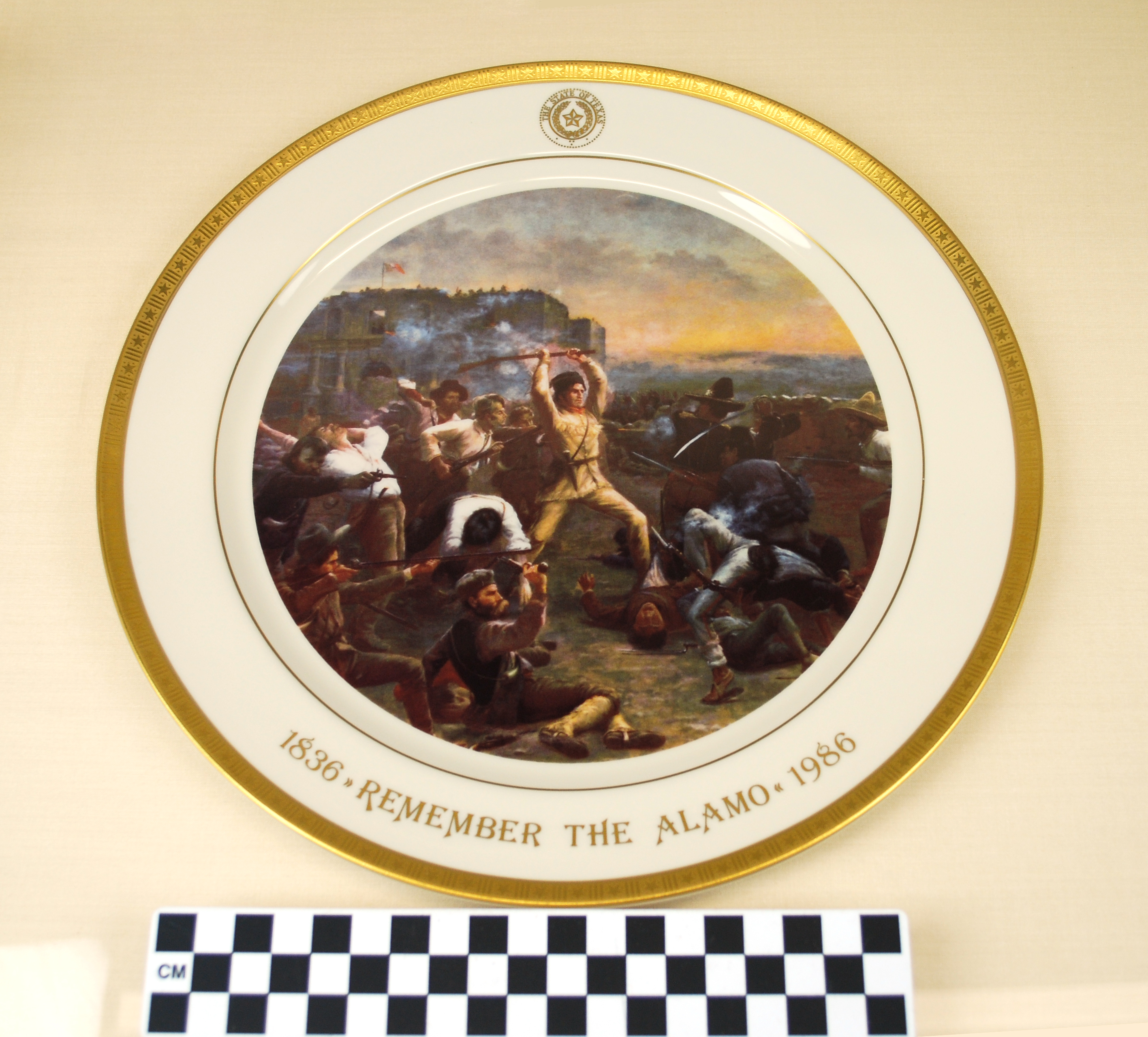 One cannot visit San Antonio without taking a trip to the Alamo. Usually after visiting the IMAX theater inside the Rivercenter mall where the movie Alamo: The Price of Freedom is continuously showing. In Texas, the Alamo is a top tourist destination visited by more than 2.5 million people a year. The object featured in this blog is commemorative gold rimmed plate commemorating the 1836 fall of the Alamo. Another popular way to commemorate the story of The Alamo has been through film. To date there have been 15 films based on the Alamo, the first was a silent film made in 1911 and the most recent was made in 2004. Although, some of these films are historically inaccurate and sometimes surrounded by controversy “the Alamo makes a good backdrop to tell stories of patriotism, courage, sacrifice and duty.”

The first known movie about the Alamo is titled The Immortal Alamo and was released on May 25, 1911. No known copy of the film exists, only still photographs and reviews in a journal titled Moving Picture World remain. The Immortal Alamo was 10 minutes long and was said to have been shot on location in San Antonio. However, this cannot be confirmed since no actual footage exists. The Immortal Alamo follows a “pretty girl, shy hero, and villain.” Richard Flores author of Remembering The Alamo: Memory, Modernity, & the Master Symbol claims this film is one of the earliest attempt at a historical documentary. Four years later a film called Martyrs of the Alamo was made. Compared to the film The Birth of a Nation, the film projected racist rhetoric, and reinforced white supremacy. The film given the subtitle The Birth of Texas and was re-released with that title in the 1920s. The film captured audiences nationwide and can still be seen on archive.org: Martyrs of the Alamo.

One of the most popular movies depicting the Alamo is the 1960 film starring John Wayne. The film titled The Alamo is one of the most expensive Alamo films made. John Wayne’s vision was to make the a historically accurate film about the Alamo. However, he mainly succeeded in producing an accurate set. After looking at different locations to shoot the film including Mexico, Peru, and Panama. It was ultimately decided that the film would be shot in Texas. This decision came after people in Texas threatened to boycott the film if it was shot in Mexico, even though in 1836 the Alamo was located inside Mexican territory. The location for the film was a 22,000 acre ranch owned by James T. “Happy” Shahan. The film premiered at the Woodlawn Theatre on October 24, 1960 and received mixed reviews. It was praised by the ‘Daughters of the Republic of Texas’ but some film critics stated it was boring and too long. The film did receive 7 Academy Award Nominations, including Best Picture, but only won one for sound. It has been argued that in the end the film had little to do with 1836 and more with John Wayne’s own vision and politics. The set of the 1960 film, called Alamo Village, remained open decades after the film was shot and became a tourist destination. In 2010 Alamo Village closed permanently and is currently for sale. The set is not well preserved and some of the buildings are succumbing to the elements. A businessman from Corpus Christi reportedly has plans to buy the set and turn it into a theme park.

In May 2002 director Ron Howard and Governor Rick Perry held a conference and announced that a new Alamo movie was in the works. According to Don Graham, the 9/11 attacks “led to an urgency to the idea of a movie about Americans taking a stand.” Ron Howard met with various historians in Austin who urged him to make the film as historically accurate as possible. Howard left the project due to differences with Disney over an R rating and budget. John Lee Hancock, a native Texan, took over as screenwriter and director. Hancock knew he would receive criticism whether he did a poorly researched film or a film that was well researched. Two historians were hired as consultants who would sit behind the camera and look for mistakes. For example, placements of flags and what kind of buttons should be on the uniforms. The film was shot on Reimer Ranch near Dripping Springs, Texas. The Curator of the Alamo, Bruce Winders stated “it’s probably the most accurate portrayal of the Alamo.” The film was set to premiere on Christmas day 2003 however, it was pushed back, making many question the film. Usually when a movie is pushed back it means there is trouble, although that is not always the case. The film opened in San Antonio on March 27, 2004 and nationwide April 9, 2004. The film received mixed reviews but most were negative. Some called it a “dry history lesson” others an “over achieving made for TV movie and a dolled up history lesson.” So why did the movie fail? Don Graham states it could be because the film clashed with everyone’s collective memory of the siege of the Alamo.

As for future films depicting the story of the Alamo, a new TV mini-series called Texas Rising will premiere on television and some theaters. The series will air on the History Channel and is produced by ITV Studios America and A&E Studios. The release date is set for May 25, 2015. The mini-series will portray the Texas Revolution and the how the Texas Rangers were created. The series will star Bill Paxton, Chad Michael Murray, Ray Liotta, Olivier Martinez and others. How this miniseries will be received and whether it is historically accurate is something we will have to wait for.