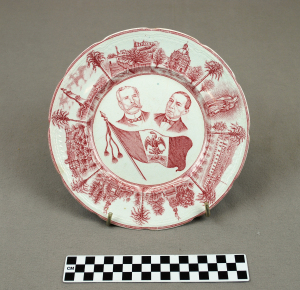 This object is a commemorative plate with the image of Benito Juarez and Porfirio Diaz with the Mexican flag in the background. Benito Juarez and Porfirio Diaz played important roles in Mexican history during the 1800s. Both came from backgrounds connected to Mexico’s indigenous population. They would find themselves at the top of Mexican politics and eventually served as Presidents during the nineteenth and into the early twentieth centuries.

The Mexican-American War began in 1946 and marked the beginning of an aggressive campaign to expand the United States territory from coast to coast. Manifest Destiny had been a popular idea throughout the 19th century and was used in 1945 by John L. O’Sullivan, an editor for the Democratic Review. This idea was used to support the annexation of Texas and the acquisition of California, Utah, Nevada, Arizona and New Mexico by the United States. By 1948 the war was over and the United States now claimed a third of Mexican territory.

Benito Juarez was born 1806 in Oaxaca, Mexico. Despite his upbringing in a peasant Zapotec family, Juarez gained the education and connections needed to begin his participation in politics by 1831 as a lawyer and liberal politician. He participated in the denouncement of the Treaty of Guadalupe Hidalgo and ex-President Antonio Lopez de Santa Anna. Later he was also against the Mexican-American War. By 1957, Benito Juarez had gained the people’s support and was democratically elected as the President of Mexico where he served until his death in 1872.

Porfirio Diaz was born in 1830 in a poor mestizo, or part Indian family. Diaz joined the Mexican-American War at 16 although he never saw combat. An avid supporter of Juarez, he was brought under him as a protégé after the Mexican-American War. He supported Juarez’s regime as a prominent member in the military. During the French Intervention, when France took over Mexico and installed Maximilian of Austria-Hungary as a monarch, Diaz continued to play an important part in the military push against the French. He was present as the Battle of Puebla in 1862 which successfully pushed back the French from advancing on Mexico City and is celebrated today as Cinco de Mayo.

Porfirio Diaz would go on to become President from 1877 to 1880. After his handpicked successor failed him, he ran for reelection in 1884 and would soon become the dictator of Mexico until 1911. At that point his administration was opposed militarily by Francisco Madero which pushed Diaz into exile in France where he died in 1915.