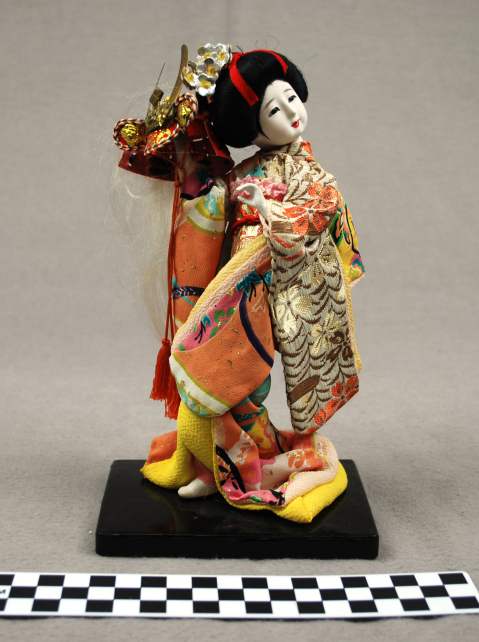 This Japanese doll is a depiction of princess Yaegaki-Hime, the heroine of a five-act drama called Honcho Nijushiko or The 24 Models of Filial Piety. This drama was originally preformed in 1766 as a Bunraku, a Japanese puppet theater originating in Osaka, and then became a popular drama in the live acting Kabuki theater. The character of the princess Yaegaki-Hime has gained fame through the Bunraku and Kabuki plays. The Yaegaki-Hime doll presented depicts her holding the legendary helmet that had been gifted to a samurai lord named Takeda Shingen by a fox god called Suwa Myojin. The helmet is enchanted to protect the samurai who wears it so that the samurai will always win and, when in need, the helmet would summon 808 foxes to protect the owner. In the famous scene of heroinism, Yaegaki saves her lover, Katsuyori, from the wrath of her father. He had sent two men to kill Katsuyori because of a family feud, Yaegaki prayed there was something she could do and mourned for her lover. She touched the enchanted helmet and became possessed by its power, with the protection of two white foxes she ran across a frozen lake to warn Katsuyori. The climax of both Bunraku and Kabuki plays is Yaegaki’s dance as she becomes possessed by the fox spirit and saves Katsuyori. The story ends as the family feud is resolved, the lovers marry and live happily ever after.

In the Bunraku tradition, scenes are narrated by musical chanting with the accompaniment of a shamisen, which is a stringed instrument of the lute family. The narrator voices the characters using a unique emotional vocal style for each character, sometimes for important scenes there may be multiple narrators chanting together. The puppeteer, or chief handler, also plays a role in narrating the story with his own exaggerated facial expressions, he would operate the head and right hand while 2 assistants, dressed and hooded in black, control the left hand and lower body movement.

The tradition of puppet theater in Japan stems from 11th century traveling story tellers and may have been influenced by Central Asia. The style of puppets has evolved from simplistic, hand-less and leg-less puppets to intricate full bodied puppets with moveable mouths and eyes. Japanese puppet theater was considered a sophisticated, adult pastime and was immensely popular the during the Tokugwa, or Edo, Period (1600-1868). The Japanese puppet theater did not gain the name ‘Bunraku’ until the late 18th century, it derives from the troupe established by Uemura Bunrakuken in Osaka, Japan. The plays for the puppet theater were written playbooks, published in authorized editions and, at the height of the puppeteering tradition over 1,000 plays were written and performed.

A new type of Japanese entertainment emerged in the beginning of the 17th century called Kabuki, where women would play both male and female parts in storytelling with song and dance. Many of the stories in the original Kabuki tradition were those of everyday life however, many of the successful Bunraku plays were adapted for the Kabuki stage. During this period, when women played the roles, Kabuki was not deemed as sophisticated as its puppeteering counterpart. The themes of these stories were often comical, suggestive and the women were usually prostitutes. The Shogunate banned women from acting to discourage prostitution and became a tradition of performance with a completely male cast.