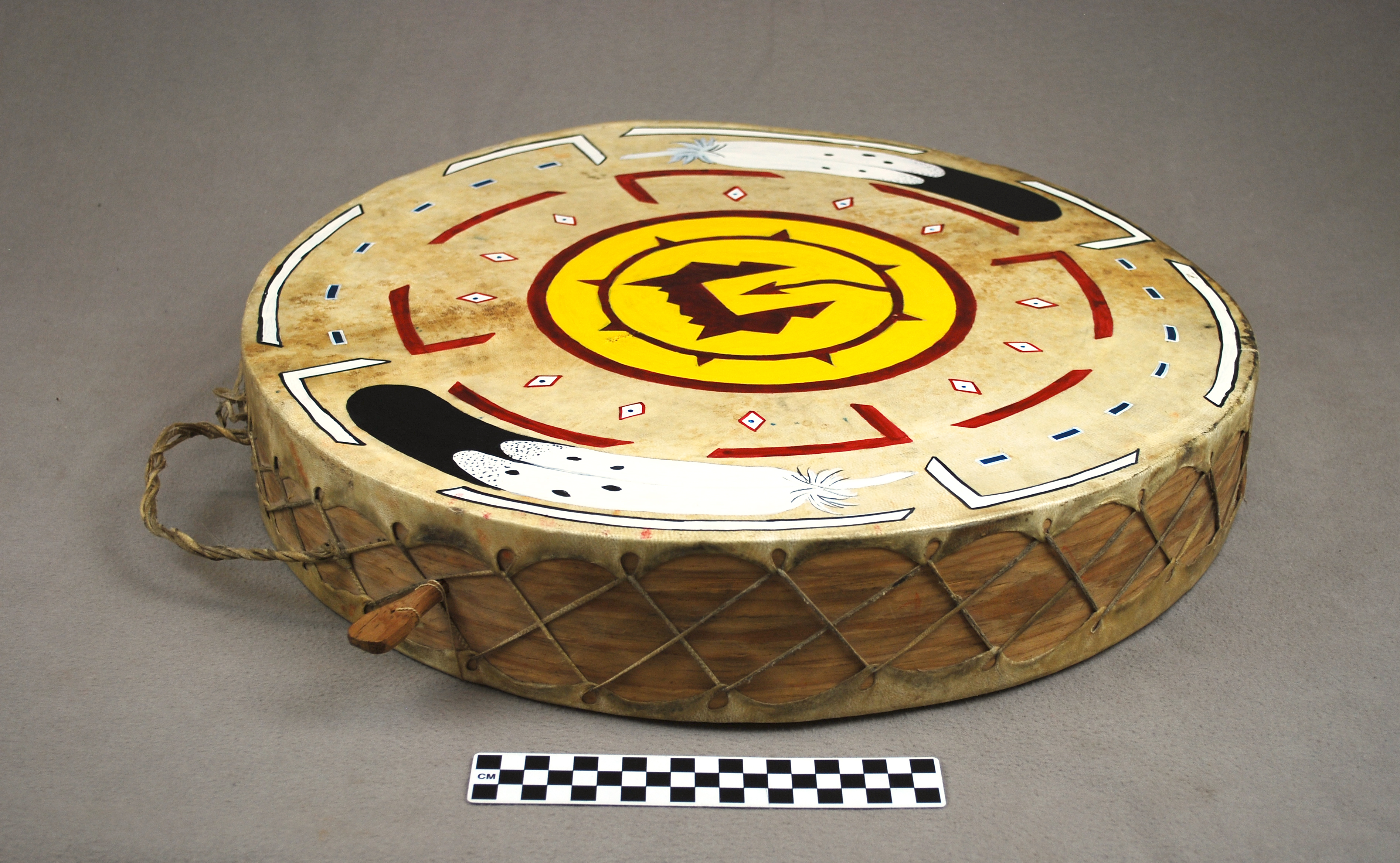 This object is a Tigua drum. The Tigua community is based out of the Ysleta del Sur Pueblo, and is located in El Paso, Texas. The Ysleta del Sur Pueblo, like many other Native American settlements, is recognized as a sovereign nation, even though it is located inside Texas. The Tigua tribe was one of the last tribes to be officially recognized in the United States. This was due to their rich agricultural economy, which sustained them and they found no urgency in being recognized. It was not until the State of Texas threatened to annex Ysleta del Sur from El Paso and subject the Tigua to higher property taxes, that they moved to be officially recognized as a surviving Native American tribe. The Tigua are dedicated to preserving their history and cultural traditions. The core values of the tribe today are centered on culture, tradition, teachings of ancestors and sustaining land resources.

The Tigua however, were not always part of Texas. Originally from New Mexico their ancestral homeland was the Quarai Pueblo. However, due to drought the Tigua were forced to leave the Quarai Pueblo, and looked for refuge at the Isleta Pueblo. However, the biggest threat to the Pueblo tribes were at the time were the Spanish who had begun settling the land. Spanish colonists were moving into the Southwest and taking advantage of the resources provided by the land. The Pueblo tribes felt threatened by the colonists and in 1680 banded together to drive out the Spanish. This is known as the 1680 Pueblo Revolt. During the revolt some of the Tigua were captured and were forced to retreat with the Spaniards, walking 400 miles south. Two years later, in 1682, Ysleta del Sur was established near El Paso. To differentiate between the first Isleta Pueblo they gave Yselta del Sur the letter ‘Y’.

The Tigua took on many Spanish customs after losing most of their land and relocating. One example of a Spanish custom the Tigua adopted pertained to leadership and family in the community. The Tigua were originally matrilineal, meaning leadership and authority was passed on in the family through the mother’s bloodline. But over time they became patrilineal which focuses on the father’s bloodline. A modern example of how patrilineal customs work is the practice of a woman taking the last name of the man she marries. The Tigua also took on Catholic marriage traditions. Often when two cultures come together neither lose all traditions but rather combine traits and sometimes form new ones.

Today, Ysleta del Sur Pueblo consist of about 1,700 tribal members. Many Pueblo tribes maintain economic stability by selling craft goods and art, but the Tigua still have a thriving agricultural economy. This drum has a hand-painted design on the rawhide drumhead. The central red and yellow pattern represents a sun which is a common Tigua design, as they are known as the people of the sun. Traditional Tigua designs are full of images of the landscape, people or animals. Today the community is making every effort to maintain some of the traditional customs of the Tigua. The crafting and playing of drums, like this one, help them practice their traditional crafts and harvest dances while also educating a wider audience about their history.