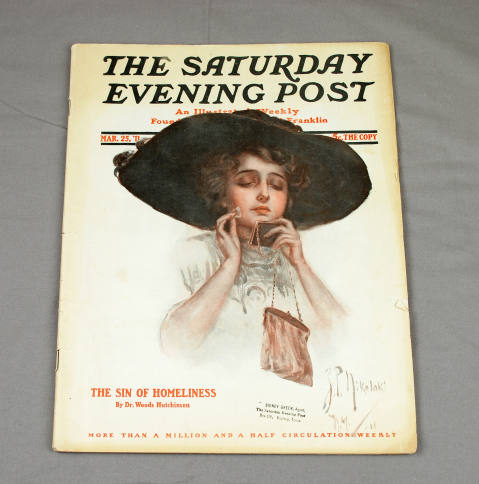 This object is an issue of “The Saturday Evening Post” from March 1911. The cover features the illustration of a woman wearing a broad brim hat, a white blouse, and holding a pink chain purse. She is checking her makeup in the mirror. The featured article included with the illustration is “The Sin of Homeliness, the Duty of Every Woman to Be Well Dressed” by Dr. Woods Hutchinson. In the article, Dr. Hutchinson says that “beauty is the outward visible sign” of health. The article stresses the importance of attire to the appearance of a woman’s beauty. This includes buying the highest quality clothing that can be afforded.

The general public used to look negatively at women of the lower class who wore clothing similar to upper class women. They were viewed with distrust and judgment. The best fashions were only associated with the rich. The lower class was expected to buy clothing for its function and not its fashion. Women were made to feel embarrassed of their desire to imitate the look of wealth. In the case of women who lived in rural areas, women were made to fear fashion as a threat to their financial security. A writer from the Ladies Home Journal suggested that men could trace the source of their poverty to the expensive clothing and jewelry they gave to their female family members. However, more and more magazines were encouraging female readers to purchase upper class fashions. Popular magazines had increased in circulation from around 18 million in 1890 to 64 million in 1905. Articles similar to the one Dr. Woods wrote, which encouraged women to purchase up and coming expensive fashions, increased. The Ladies’ Home Journal emphasized the value of clothing when the editorial staff congratulated women for dressing well in 1923.

In reaction to a growing demand for cheaper fashions, programs started to develop around the country delivering advice to women on how to dress stylish inexpensively. The Cornell Extension Program offered presentations, the most popular of which was “The Well Dressed Woman” in 1924. Up to 4,597 rural women were known to attend these programs. Because some women sewed their own clothes at home, in 1863 the Butterick Publishing Company started to sell sewing patterns modeled after the popular styles of the time.

As serious shoppers, women helped to increase consumerism in the twentieth century. The upper class were always changing their style in order to separate themselves from the lower classes that were copying them. Because of the constant changes, the demand for accessible fashion increased, stimulating production. Advances in technology allowed for the creation of the assembly line. As technology grew, so too did storefronts. Between 1886 and 1912, the recorded number of chain stores increased from two chains with five stores total to 177 chains with 2,235 stores. The department store also increased in popularity. The department store embodied elements of smaller stores, offering multiple products to their customers. The first department store was opened in New York City in September 1848 called The Marble Palace, also known as A.T. Stewart Dry Goods Store. In 1877, R.H. Macy & Co in New York occupied 11 buildings. By 1924, it relocated to Herald Square and occupied more than 1 million square feet of space.

Some scholars suggest that the response to women’s consumer needs led to a growth in mass manufacturing and led to the consumer society we live in today.