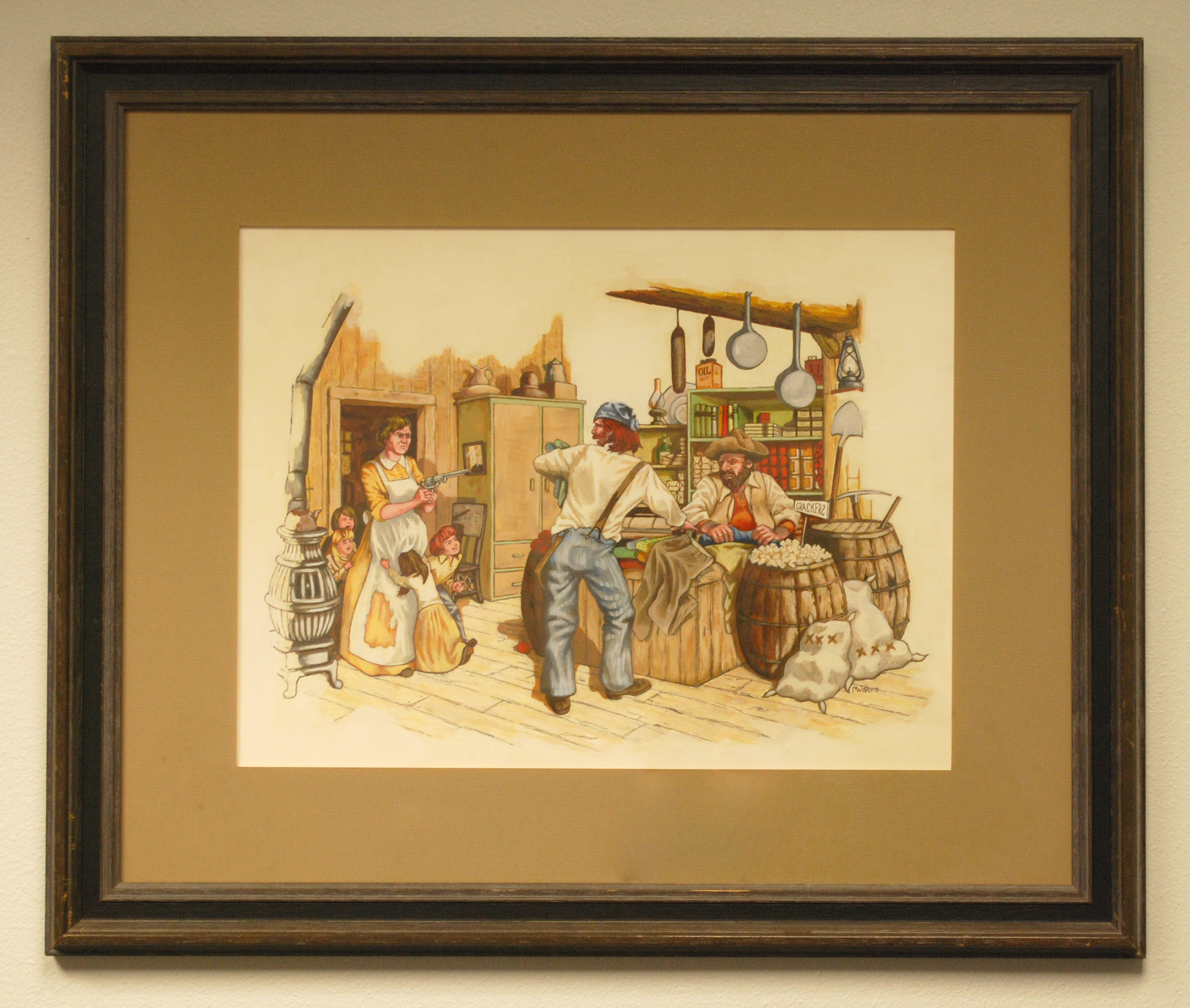 This is a watercolor painting by Michael Waters entitled “Helena Landa Fending off Robbers.” It depicts Helena Landa, surrounded by four of her children, fending off robbers with a pistol in her family store in New Braunfels, Texas. Helena Landa was born Helena Friedlander in Kempen, Germany. Her husband, Joseph Landa, was born in Prussia in 1810. Joseph Landa moved to Texas in 1845, they were married in 1851 and had 7 children. When they moved to New Braunfels, they were the only Jewish family in their German community. They held regular services in their home and Helena prepared her own matzoh balls ever year for Passover.

Joseph opened a general store in San Antonio and one in New Braunfels. With the money he earned, they purchased up to thirty thousand acres of land around Texas. In 1863, U.S. President Abraham Lincoln passed the Emancipation Proclamation that granted slaves in the Confederate States freedom. Joseph Landa freed his slaves but feared confederates would harm him, so he fled to Matamoros, Mexico and left Helena in charge of their business interests. In his absence, Helena ran their general stores, sawmills, and cotton gin. After the American Civil War ended, Joseph returned home. After Joseph died in 1896, Helena helped her son Harry operate the Landa Roller Mills, the Cotton Oil Factory, the Electric Light and Power Plant, an ice-manufacturing plant, stock farm, and irrigated gardens.

Pioneer women in the 1800’s were able to support their families by working. They produced cheese, preserved food, and made soap and candles. Some women found jobs as seamstresses or washerwomen. Others became teachers or operated hotels. The Congress of the Republic of Texas adopted laws in 1840 that prevented married women from making contracts. However, some women were able to find loopholes around the law to allow them to engage in business ventures. In the 1900 U.S. Census the number of women in Texas who reported to be merchants or dealers totaled 531.

Texas was home to some notable women who found success as business owners. Sarah Horton Cockrell in Dallas, Texas helped her husband Alexander operate a sawmill, gristmill, and construction business. After her husband died in 1858, she took over their businesses and eventually opened the St. Nicholas Hotel in 1859. After that burned down, she built the Dallas Hotel in 1860. In 1872 she opened a suspension bridge that united Dallas with major roadways. In 1868 she was one of only 4 women who were members of the Dallas County Agricultural and Mechanical Association.

Another woman, Maria Gertrudis De La Garza Falcon, and her husband Jose Salvador de la Garza owned up to 284,416 acres of land, west of Brownsville. After her husband’s death, Maria became the owner of the land and all the livestock on it. Elizabeth Ellen Johnson Williams started out as a schoolteacher, but in 1871 she began to raise cattle and eventually became known as the “cattle queen”.