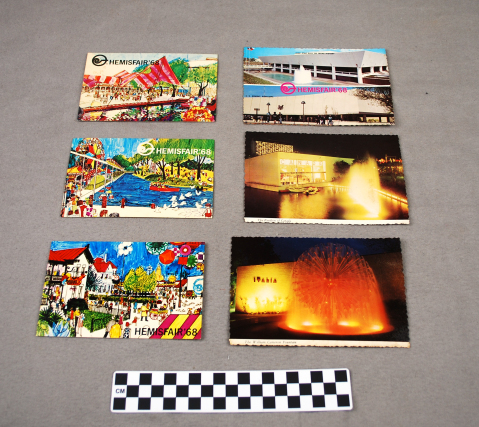 These six postcards were produced for HemisFair ’68. The first postcard, top left hand corner, is a picture of the food from around the world. Many varieties of international foods were served in cool outdoor plazas, and fine dining restaurants throughout the park. Food, while always an important part of any World’s Fair experience, recently took center stage at the 2015 Milan World’s Fair. While HemisFair’s theme was a “Confluence of Civilizations in the Americas,” Expo Milan was focused on how to feed an ever growing world population with the theme “Feeding the Planet, Energy for Life.”

The second post card, under the previous one, is the scene of the fabulous 92.6 acres of HemisFair ’68. Visitors were able to explore the park in gondolas and Mexican flower boats, a mini-monorail system, a Swiss sky ride, and elevated walkways—each afforded a distinctive perspective on the 1968 World’s Fair. Today, San Antonio is considering revisiting the sky ride and monorail idea in order to make the city more accessible to pedestrians and help to revitalize the Broadway corridor. This potential project, proposed by a UTSA college of architecture team, “1000 Parks and a Line in the Sky: Broadway, Avenue of the Future” is also currently being featured as an exhibit at the UTSA Institute of Texan Cultures.

The postcard in the top right hand corner, is a picture of the State of Texas Pavilion. This was the largest pavilion at HemisFair ’68 and is now the home of the UTSA Institute of Texan Cultures. Today, the museum pursues a mandate as the state’s center for multicultural education by investigating the ethnic and cultural history of the state and presenting the resulting information with a variety of offerings, including this blog, with a mission to give voice to the experiences of people from across the globe who call Texas home, providing insight into the past, present and future.