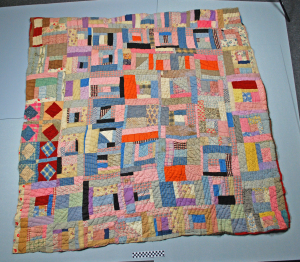 This item is a quilt from ca. 1950 obtained from the estate of an African-American family living in the San Antonio area. An appraiser from the Antiques Roadshow verified the date and ethnic origin of the quilt by its style, construction, and materials. The quilt appears to have been made using a “strip construction” technique. Strip construction uses strips of fabric cut and sewn together in bands. This method, combined with the improvisational style, is consistent with African American quilts from the 1950’s.

The origin of quilting in African-American culture is a greatly debated topic. Researchers are unsure what influenced the quilts style. They also question what purpose and function they were made for. The answers are hard to pin down because few quilts from before, during, and shortly after the Civil War survive today. Some scholars suggest that African-American quilts were influenced by traditional African weaving and textile production. In West Africa, men were traditionally the main producers of textiles. However, when enslaved Africans were transported to the United States, women became the principal makers of quilts. Some scholars point to the use of bright colors combined with pattern improvisation, asymmetrical design, and strip banding as proof of African influence in African-American quilting. They claim that strip banding in particular is similar to African weaving. They also suggest that slaves may have hid African designs and religious symbols in the quilts they created in order to preserve their African heritage. However, other scholars say those theories are the result of speculation. Instead, they believe that the time periods as well as the regions the quilts were produced in were the major influences on the design and construction of African-American quilts.

Another controversial topic is whether African-American quilts were used during the Civil War to conceal secret communications. Two historians, Jacqueline Tobin and Raymond Dobard, suggest that a “quilt code” may have been used to assist slaves in navigating the Underground Railroad. According to their theory, a slave seamstress would sew a quilt that contained several patterns for other slaves to memorize. The seamstress would then display different quilts using those patterns to provide information to help people trying to escape. The patterns displayed may have included designs such as a wrench pattern directing them to gather tools, a wagon pattern indicating the need to pack, and a bear claw pattern directing slaves north over the Appalachian Mountains. But no verified “code quilts” exist to this day. Additionally, Tobin and Dobard obtained their information about the quilt code from only one source: an individual descended from slaves. The claims have yet to be corroborated by other individuals or oral histories.

Some of what we do know about early African-American quilting culture was obtained by the WPA during the 1930’s. During the Great Depression, the Works Progress Administration (WPA) was a New Deal program created to provide work relief. The WPA started the Folklore Project in order to employ out of work writers. They would gather stories from Americans who lived during major historical periods, including former slaves. In the oral histories, prior slaves could recall female family members piecing together quilts out of old clothes and scraps. More information on early African-American quilting can be found in documents about slave life. Both the WPA and written records verify that slaves made quilts for both their masters’ use as well as out of necessity for their own families. What does seem to be apparent about early quilting practices is the importance of quilting parties, or frolics. Quilting parties were integral in allowing slaves to socialize. Informally, female slaves would gather in the evening or on Saturday afternoons to quilt and sew. After the Civil War, quilts were made from scraps of discarded clothing and feed sacks. During the 1920’s, more and more people moved to northern cities to find work in jobs created by increased industrialization. As the years passed, African-American women were able to create quilts for enjoyment as well as need.

In 1966 a group of African-American women in Alabama established the Freedom Quilting Bee, a quilting cooperative. The group began as a way for poor women to provide for their families. It began with 150 quilters who learned their craft from their mothers and grandmothers. They would auction off their work and split the proceeds with their members. The group also provided a support network for the women of their cooperative. Their group is credited with revitalizing the popularity of quilts in American home decor during the 1960’s.