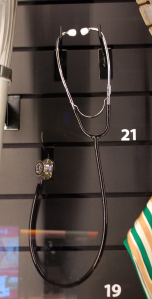 A common symbol often associated with the medical field is a stethoscope. This device is often seen hanging around the necks of medical personnel. The stethoscope was invented in 1816, by a Frenchman named Rene Theophile Hyachinthe Laennec. The notion of listening to internal sounds of the human body is called auscultation. Before devices like the stethoscope, listening to internal sounds was done by placing ones ear on another persons body, this is called immediate auscultation. Laennec came up with the idea for the stethoscope when he was too embarrassed to place his ear on a young woman’s chest. Instead he used the concept of sound traveling through solids and rolled 24 sheets of paper, placed one end to his ear and the other end to the woman’s chest. To his surprise it worked and the sounds were loud and clear, this is called mediate auscultation.

The name for the device was not always stethoscope. In fact, Laennec preferred the device be called “Le Cylindre” but believed the device did not need a name. After his colleagues began to give it random names he decided that if the device was going to have a name it would be stethoscope. The name comes from the Greek words of stethos (chest) and scopes (examination). At that time the stethoscope was a wooden cylinder and looked similar to a hearing aid in use at the time, known as the ear trumpet. The device would look this way until 1851 when the stethoscope was made to be used with both ears, or binaural. This was made possible due to the invention of rubber. George Phillip Cammann is credited for the binaural stethoscope after he published specifications for the model in 1853. Today it is one of the most recognizable pieces of medical equipment.