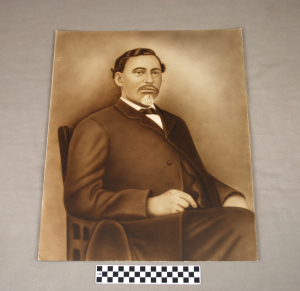 This object is a photographic print of Richard Allen (1830-1901) a political leader in Texas. Richard Allen was born a slave in Richmond, Virginia on June 10, 1830. He was brought to Harris County in Texas, where he was owned until emancipation in 1865. While a slave he became skilled in carpentry and designed the mansion of Houston mayor Joseph R. Morris.

After emancipation Richard Allen became a contractor and bridge builder. The first bridge to be built over Buffalo Bayou is said to have been Allen’s work. Allen first entered the political scene when he became a voter registrar, in charge of distributing and accepting voter registrations. He later became an agent for the Freedmen’s Bureau. The Bureau of Refugees, Freedmen and Abandoned Lands or more popularly known as the Freedmen’s Bureau was established by the War Department in 1865 after the end of the American Civil War. The Freedmen’s Bureau was created to help former black slaves and poor whites in the American south. After the war many communities were left in ruins. The Bureau provided food, housing, medical aid, established schools, and offered legal assistance. The people who worked for the Freedmen’s Bureau were essentially social workers. Each district would send out assistant agents to communities in the south. However, once there they were exposed to ridicule and violence from whites which included terror organizations like the Ku Klux Klan.

The Ku Klux Klan or KKK for short was an organization founded in 1866 and in almost every southern state. The group largely rejected President Andrew Johnson’s reconstruction policies. The group ran a campaign of violence against Republicans, both black and white, hoping to reverse reconstruction and return to white supremacy in the South. 10% of black legislators who were elected during the 1867-1868 constitutional conventions were victims of violence from the KKK and some lost their lives. Due to the violence being spewed toward blacks, a movement to leave the south and head west toward Kansas became a popular.

The movement was led by a man named Benjamin “Pap” Singleton, and the goal was to find a better life somewhere other than the south. Singleton was born a slave near Nashville, Tennessee. He was skilled in carpentry but never learned how to read or write. After attempting to escape from slavery several times he was finally successful in 1846 and headed north to Detroit using the Underground Railroad. Singleton witnessed the inequality that freedmen were facing and realized they would never get equality in the south. In 1874 Singleton founded a real estate company in the hopes of helping African Americans get land in Tennessee. This failed as many white land owners refused to bargain and sold the land for high prices. Singleton then turned his eye to Kansas, and after a few setbacks, the first wave of exodusters migrated to Kansas in 1879.

As for Richard Allen, after he led the short lived exodus movement he served as a delegate for the National Colored Men’s Convention. He also served as chairmen for black state conventions where African Americans voiced their concerns about civil rights, education, and economic issues. He became Grand Master of the Prince Hall Masons once they organized in Texas. Richard Allen passed away on May 16, 1909.