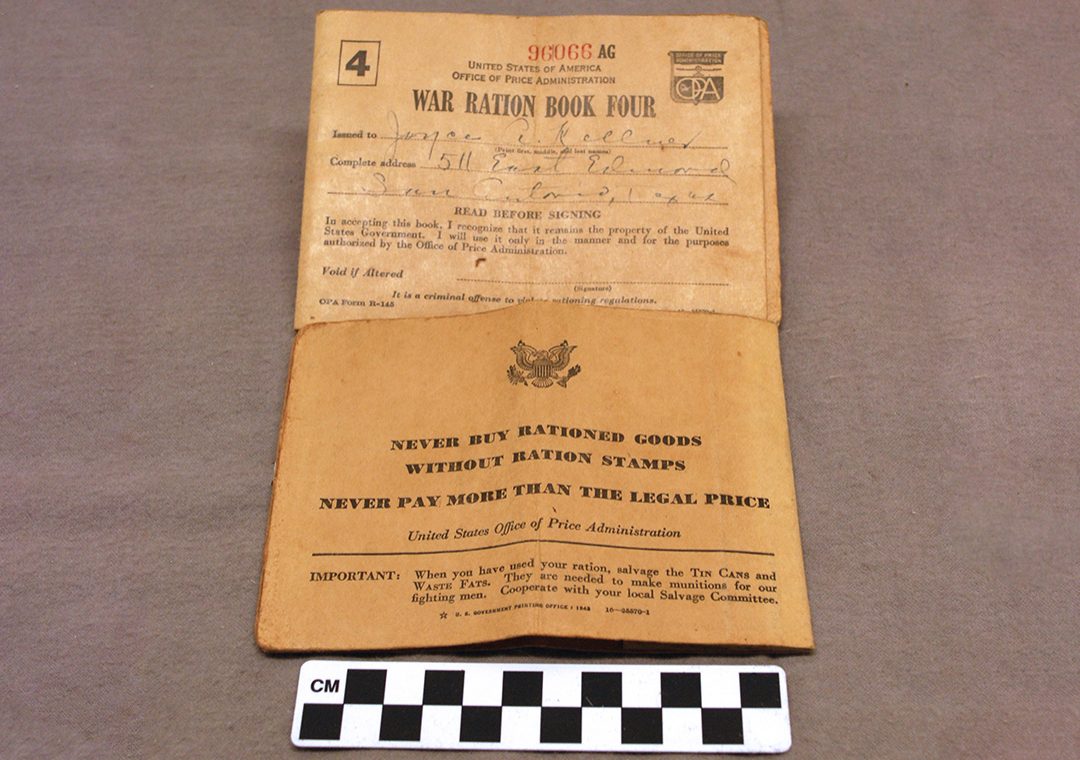 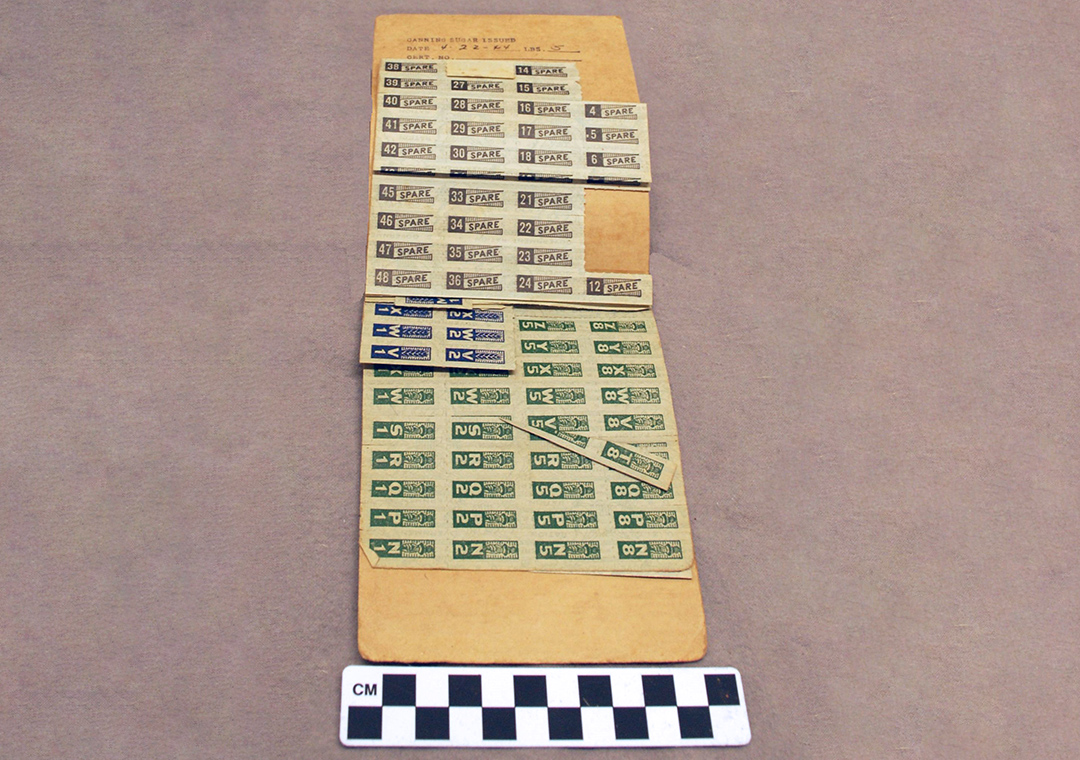 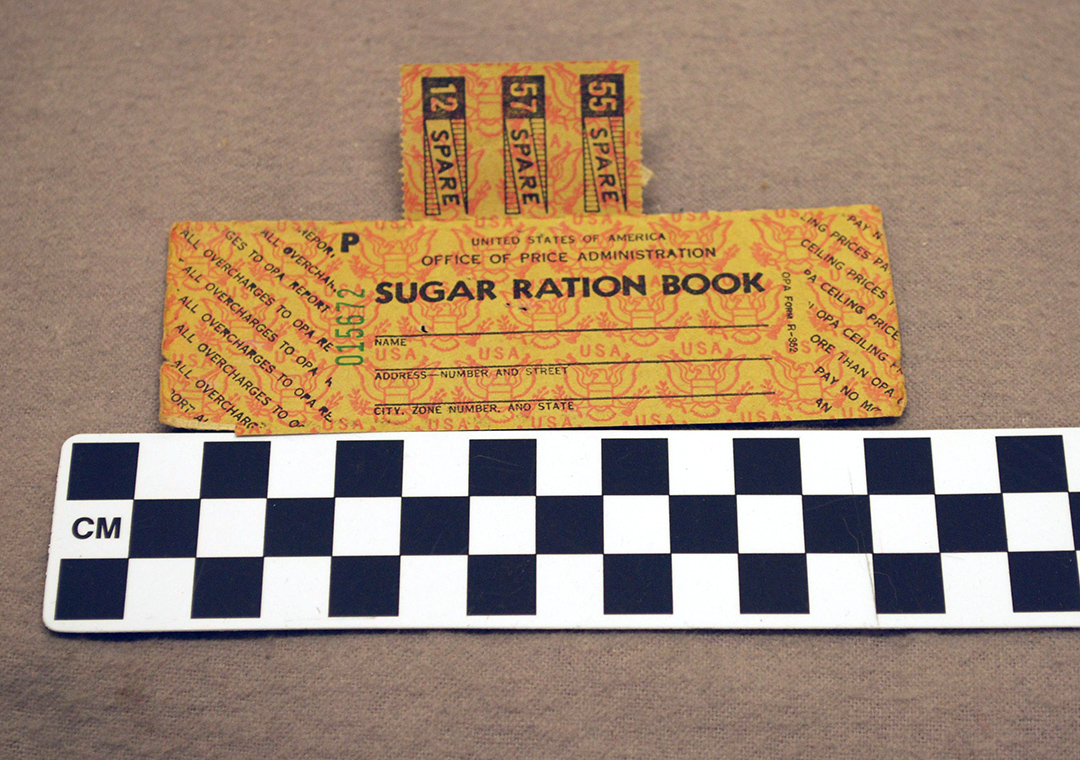 This is a ration book dating to 1944. During World War II, the United States rationed food and other commodities on the home front to ensure that there would be adequate food for both their military operations and the civilians back in the US. The different colored stamps were for different types of products. The green and blue stamps were for canned foods like soups, juices, baby-food, etc. Red stamps were for meat.

The letters on the stamps indicated when the stamp was valid, while the number on the bottom indicated how many points they were worth. Retailers would have an official government list of how many points items cost. Ration stamps did not replace money however, customers would still have to pay for the food. The ration stamps just limited the quantities of various items that could be purchased. Food was not the only rationed item, items like typewriters, cars, tires, gasoline and shoes with rubber soles were also rationed. Anything that the army could use to feed, clothe, protect and arm their soldiers with tended to become rationed as part of the war effort.

The remaining unused stamps in this book are primarily for canning sugar, which would be used to make preserves. Sugar was the first food rationed due to difficulties in maintaining supplies. It was rationed even after the war, until production was back to normal in 1947. Women who wished to can produce were able to get extra sugar, with the pledge that they would be canning fruit, at least four quarts per pound of sugar. In order to work within the ration system, the government printed cookbooks that would give suggestions and substitutions for ingredients that were then in short supply.

So called “Victory Gardens” were very popular during the war, as they provided additional food for households while freeing up food processing facilities for war-time needs. Some private and many public lands were used to grow fruits and vegetables to make up for shortages of canned goods. Many public parks were converted to gardens as well.

These gardens were also called “War Gardens.” Not only did they produce a significant contribution to food resources for the home front, they gave people a morale boost. For the gardeners tending these gardens, they felt like they were doing something to help the soldiers on the front lines. Home canning of fruits and vegetables became very popular and a variety of books and resources were available to homemakers. By 1944, 20 million Victory Gardens produced over 40% of all vegetables grown in the US.

Given the tough economic climate today, there is a strong movement towards food independence, and community gardens are making a comeback. Some feel that producing food locally is better for local economies, some are focused on the environmental impact of shipping food long distance, and some are against big business. “Guerrilla gardeners” find neglected lots and parks and sow seeds and plant seedlings. Often the focus is on edible plants, but sometimes they will plant ornamental varieties as well. In some regions this is appreciated, while in others they risk getting arrested for trespassing. The locavore movement focuses on only eating food produced within a 100 mile radius of one’s home. Many people within this movement are beginning to look at preserves as a way of having the produce they like year round, whether from their own garden or from the local farmers’ market. Texas recently passed a law in 2013 intended to make it easier for residents to sell home canned preserves at farmers’ markets.