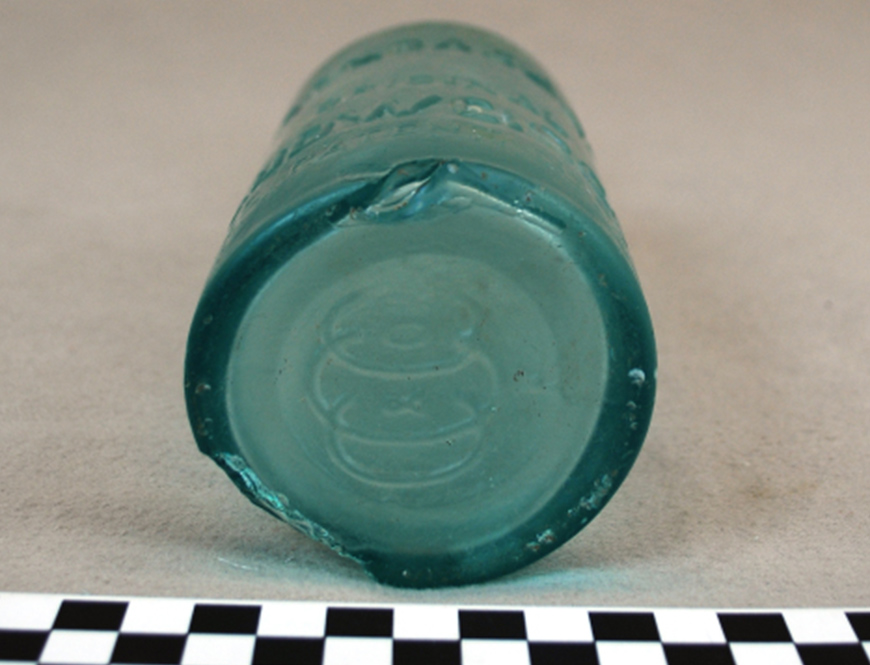 The modern landscape of Houston, the fourth largest city in the United States, is one of constant change. During the replacement of a bridge in downtown, archeologists from the Texas Department of Transportation (TxDOT) realized they were working on top of one of Houston’s original neighborhoods, Frost Town. It began as a community of predominantly German immigrants in the 1830s, and it later became home to many African American families following emancipation, then a vibrant Hispanic neighborhood during the early decades of the 20th century.  While much is known about Houston’s founders and wealthy class, the archeologists were hoping to tell a new story of how Houston’s working class lived and worked.

During excavations they came upon an interesting feature: rows of upturned glass bottles buried in the ground outside of house foundations. Before (and even after) recycling programs existed, Germans would often use glass bottles as ornamental features in their yards.  Archeologists date the style of one particular bottle to at least 1878-1882, giving an approximate date to when the bottle was placed in the ground. Given that both Frost Town was predominately German and Budweiser was brewed and named to appeal to German immigrants, it is no surprise that TxDOT recovered this artifact from the Frost Town site. It featured two logos; one reads “Original Budweiser” on one side and “CCC” on the base. It seemed the bottle had a deeper story to tell.

Message in a Bottle: Early Days of Anheuser-Busch

Budweiser’s early days started with a young German immigrant named Carl Conrad. He traveled to Belgium to become a brew master before bringing back a recipe to St. Louis, declaring that it was “the best he ever tasted.”

He built his company, Carl Conrad & Co., importing wine and liquor. Conrad marketed Budweiser beer, named after the Bavarian town Budweis, where he found the inspiration for his recipe. He contracted with several companies for bottles and his friend, Adolphus Busch brewed Conrad’s recipe through his company; the Anheuser-Busch Brewing Association. Despite Conrad’s swift national success, he declared bankruptcy on January 15th, 1883 and Anheuser-Busch assumed the rights to brew, bottle, and sell Budweiser. Conrad then worked for the company for many years.

In 19th century Houston, the Buffalo Bayou river was an important transportation route. Along a horseshoe bend of the Bayou sat Frost Town. Instead of large farms that defined the time and location, Frost Town had houses and plots like the neighborhoods we see today. Years of development, first by railroad and then by roads, covered this historic site, which is just minutes from Minute Maid Park under the Elysian Street Bridge.

German laborers were among the earliest residents of the Frost Town community, and they would continue to dominate demographic of the neighborhood for many decades. Germans immigrants settled in virtually every area of Houston, but the Second Ward became an unofficial hub of German-American culture and social life during the 1800s.

Archeologists at TxDOT are building oral histories and interpretations of the archeology in order to share this unique story: Frost town’s rich ethnic diversity embodies the City of Houston today is revealed as not new, but a fundamental part of the city’s heritage.