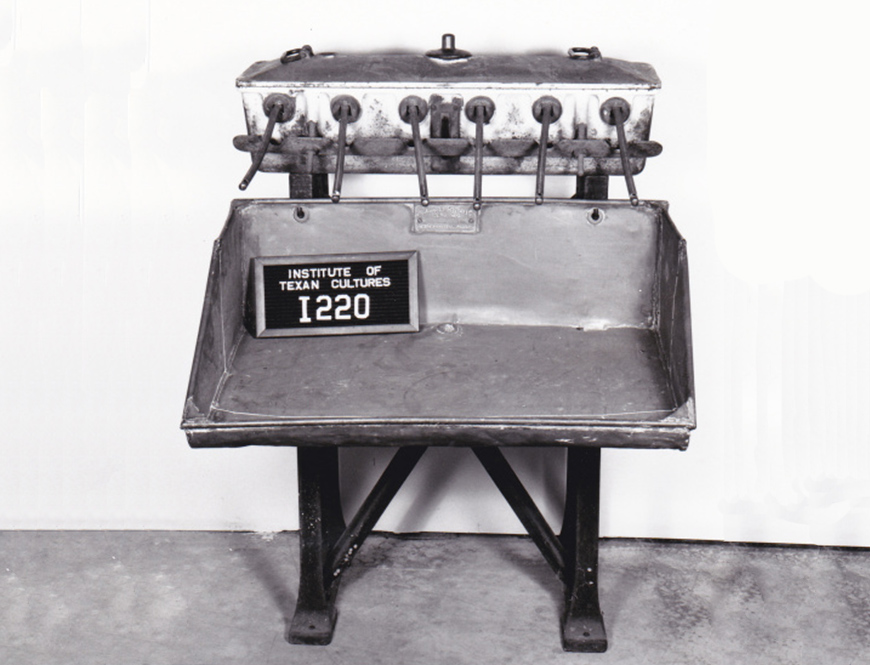 This object is a beer bottler from the Peter Bros. Brewery, which was in business from 1905 to 1910 in San Antonio, Texas. The brothers, John, Augustus “Gus”, and Edward bought a small house on East Commerce street in 1903 and began their brewing business in 1905. During prohibition the brewery no longer made beer, but operated as a soft-drink stand instead. In 1933, after the repeal of prohibition, the brothers open a lunchroom and sold local beers instead of producing their own.

The tradition of brewing in Texas began as early as the 1840s, when a large influx of German immigrants moved to Texas. For Germans, beer-drinking was an integral part of everyday life. When they began moving to Texas, it became important for them to have beer available to them, so people started brewing businesses.

One of the first known breweries in Texas was Julius Rennert’s, which he licensed in 1849 in the town of New Braunfels. The beer he made supplied many surrounding town’s saloons, including those of San Antonio. He stayed in business until the added competition of William Menger’s Western Brewery, or Menger Brewery, and the Lone Star Brewery caused him to close his brewing company in the 1880s and his son became a distributor for Lone Star.

Rennert was only one of the many people to start up brewing companies in San Antonio and the surrounding areas. Most stayed small and were only in business for a few years, with exceptions like Menger’s Western Brewery, Anheuser-Busch of Lone Star, Pearl Brewery, and the still operational Blue Star. Large commercialization of these companies, as well as prohibition in 1919 caused most of the small brewing companies to go out of business fairly quickly. The Peter Brothers’ Brewery was one of those short-lived businesses, but it seemed to enjoy a great deal of popularity in its time.