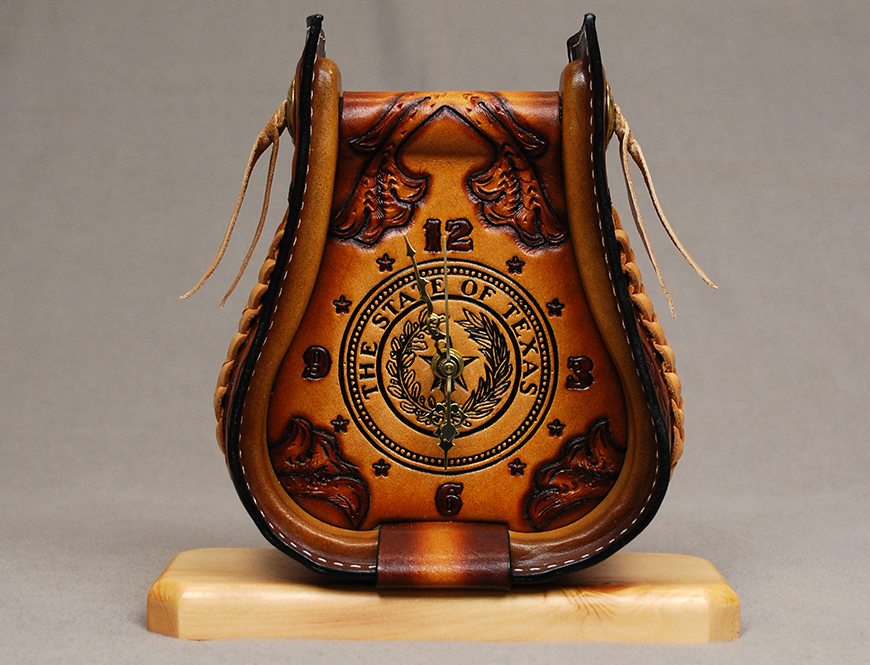 This item is a clock made from a leather stirrup, mounted on a wooden base. It was made by an inmate of the Texas Department of Criminal Justice at Huntsville, Texas. For hundreds of years, prisons have used prison labor for a variety of reasons. Texas has had prisons utilizing prisoner labor since before the Civil War. In Texas, evidence for local governments wanting to use prisoners for labor can be seen as early as 1829, where officials of the Mexican state of Coahuila and Texas looked to build two prisons in Bexar and Parras. These prisons were to provide labor and money to both the state and those running the prison. Ultimately, these prisons would not be built, but the idea would not be lost. On March 13, 1848 legislation was passed for new prisons to be built close to the water and provided with equipment and machinery so that goods could be manufactured and moved. The spot chosen for this new initiative was the town of Huntsville, the same town from which this clock was created.

In 1853, Governor P.H. Bell called for money to install cotton mill equipment at the prison. This was done in hopes to make the prison self-sustaining. This shift in production, and new equipment would prove to be valuable for Texas during the upcoming Civil War. During the Civil War, the penitentiary was a major source of revenue for Texas, amounting to $800,000 in the state treasury in just 1863 alone. After the Civil War, that would no longer be the case however.

After the Civil War, and the emancipation of slaves in the South, prisons and prison labor was used by many southern states and businesses to control the newly emancipated African Americans and their labor. During Reconstruction, laws called the Black Codes were put into place to achieve this goal. The most absurd of these laws made it illegal for African Americans to do things such as use insulting gestures or language, “mischief,” and not having written evidence of employment for the year. Under these codes, blacks could be arrested for these or other dubious reasons, and could be leased out as unpaid labor to plantations or southern business, or kept at the prison to work.

During the first half of the 20th century, The United States began phasing out commercial prison labor all across the country. Between 1929 and 1943 prison based industries and leasing prisoners to outside businesses were made illegal. By the 1950s, chain gangs and their like had disappeared. However, legislative acts within the past few decades shows that the idea of prison labor has not faded away completely. In 1995, the Prison Industries Reform Act and the Prison Industries Enhancement Certification Program (PIE) have created an expansion in business and prison partnerships. This is due to several reasons, including the massive amount of prisoners and the cost of maintaining prisons in the United States. However, this reintroduction of labor into prisons was very controversial. In 1995 in states such as Alabama, chain gangs were seen for the first time since the 1950s.