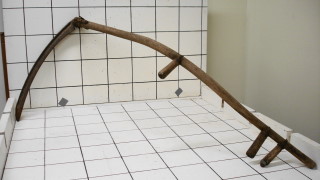 The scythe has been around for centuries. Scythes are used as a tool for harvesting crops, such as wheat, or cutting away unwanted weeds, or tall grass. The scythe has a curved razor-sharp iron blade attached to the end of a wooden staff that has three handholds for easier control. This tool was widely used throughout Europe since before the Middle Ages, to the present, in countries like India, Nepal and the Americas. It is believed that the sickle was replaced by the scythe because of the scythe’s ability to quickly cut crops during the harvest season, which cuts the chances of losing valued crops due to the time it took to retrieve them with the sickle.

It was not uncommon for a woman to use this tool starting in the colonial period, however, back in the 1600s it was typically a “mans job” to cut the crop and bind the cut stalks together. The women would have followed close by collecting the banded work, therefore known as gatherers. Today you can find scythe competitions, with events testing who can cut an area of grass the fastest using a scythe. There are also events that test if a person with a scythe can be faster than modern-day machines, which often ends in favor of the scythe. These competitions are found primarily in southern states.

The Grim Reaper, as we know him today in popular culture is often depicted standing close by his chosen victim until he chooses to take the person’s life, or he acts as a guide to lost souls and show them the way to heaven or hell. In video games, Death normally acts as one of the many adversaries a gamer needs to defeat to move onto the next level. Death is also associated with biker gangs and military unit mascots. In the past Death would even find its way to be immortalized as statues in cathedrals. Death has always held a special place in man’s mind because of fear and respect of mortality; the inevitable end.