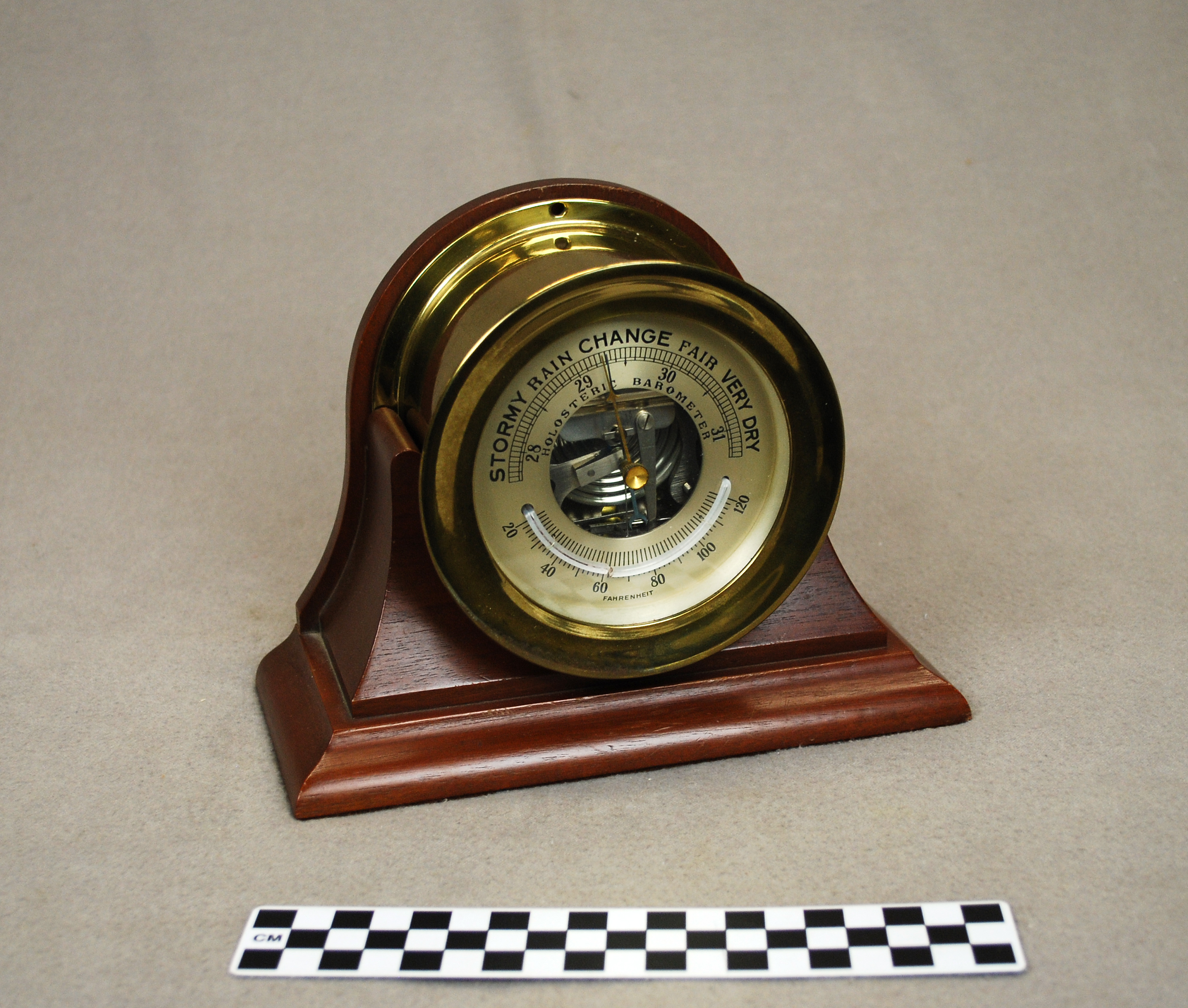 It’s important to keep track of the weather. The weather can have a dramatic impact on our material needs such as food, clothing and building materials. These are our absolute basic necessities and depending on where you live, your environment will provide you different resources. The hot summers of Texas often leave us with a low water supply, in drought, so watching when the rains will come can help us manage our crops so we can have food on the table and protect our homes.

This Holosteric Barometer can help you predict if you should bring a raincoat or pack the sunscreen when you leave the house. The Chelsea Clock Company made this particular barometer. Founded in 1897 and named after Chelsea, Massachusetts, Chelsea Clocks Company hit it big in the early 1900s when the Navy purchased over a hundred hand-crafted ship bell clocks for their fleet. After this initial purchase, every branch of the military was outfitted with Chelsea clocks; you can still find them on mantels in the White House today.

Chelsea Clocks outfitted many Navel ships with this holosteric barometer because it measures the pressure of the air by weighing it. Air gets its weight from water that the barometer records in millibars. What this mean is as the air releases moisture, or holds in moisture, the barometer can give a reading from very dry to stormy. If there is a lot of moisture in the air, your barometer will read rainy or stormy. In the course of a day you normally won’t see the barometer needle move very much, with only a slight change caused by the transition from morning to evening. The cooler over-night temperatures release moisture from the air; we see this as dew on our grass in the morning, making the air lighter. Heat from the sun during the daytime hours pulls moisture into the air by the process of evaporation, making the air heavier and moving the needle of the barometer.

In 1860 Paul Naudet & CIE of Paris applied the term holosteric to the barometer. Holosteric simply means without liquid. The first accurately functioning barometer developed in 1643 by Evangelista Toricelli used mercury to measure the pressure change. The holosteric barometer eliminated the need for mercury. Paul Naudet placed a mechanical piece to read pressure change into the barometer. The holosteric barometer uses a thin piece of metal that flexes as the pressure changes and moves the needle of the barometer. The thin piece of metal is called a diaphragm. The barometer came a long was to become holosteric. When Toricelli first began discussing measuring the weight of air he was very controversial. His opinions clashed with other great thinkers of the time such as Galileo who made many foundational discoveries, such as the thermometer Galileo’s theory in 1612 was that we all lived without pressures because air doesn’t weigh anything. Galileo was sure that air must not weigh anything because we walk freely within it, just as a fish can swim freely in the ocean. Toricelli was not convinced by this, he believed that air was more like a sponge and its weight came from the water it soaked up in the atmosphere, so Toricelli developed the barometer to measure that weight. He suggested that there were forces of pressure all around us, all of the time. Along with the aid of many others experiments were conducted and results gave way to the barometer.

Try creating your own barometer and start tracking the weather in your area. What kind of environment are you living in?