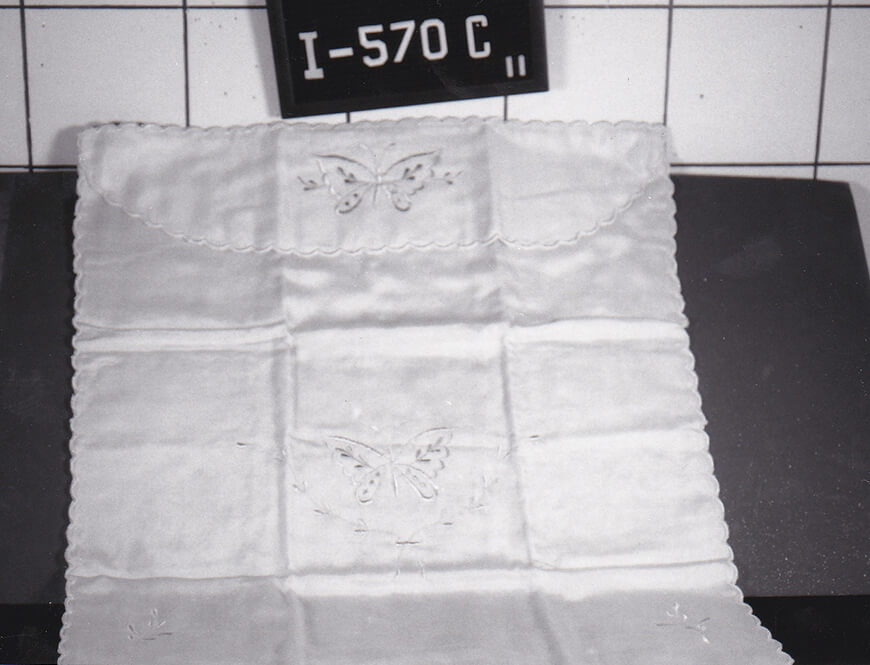 In the Jewish tradition, baby boys are circumcised on the eighth day after their birth, where the foreskin of the penis is cut. This baby blanket was used for the donor’s circumcision. It was donated as part of a set of clothing made for his circumcision ceremony, or Bris service. His Bris service was performed on September 10, 1927, in Fort Worth, Texas, followed by a celebration held at his maternal grandparent’s home.
In the Jewish faith, circumcision is considered to be an active way for male Jews to participate in worshiping God. Typically this ritual is performed eight days after the birth of the child. Though in modern days, if circumcision is considered too dangerous for health reasons, the circumcision ritual will be postponed until a doctor gives their consent, with the ritual performed 7 days later.

Jewish immigrants have lived in Texas since Spanish colonial times, though these groups did not openly practice their Jewish faith. Jews were discriminated against by Spanish Catholic colonials, so most Jews who came to Texas before the 19th century had converted to Catholicism beforehand in order to be allowed to settle in the region. After the American Civil War, mass groups of Jewish immigrants came to the United States and Texas from Germany and other countries in Eastern Europe. Most Jewish groups who came to Texas though did not settle in one large community with each other, unlike many other European immigrant groups. Other European immigrants were farmers and created settlements together, however the majority of early Jewish-immigrants were merchants. As a result they scattered throughout the state, selling products in their own shops in towns and cities around the state. As these businesses grew chain stores were created, such as the Zales Jewelry Corporation. Founded by Russian-Jew immigrant Morris B. Zale, this now thriving business was established as a single store in Wichita Falls in 1924.

By the 1850s, organized communities were formed for Jews in cities, with their religion bringing their communities together. These new communities centered around a local synagogue, the Jewish house of worship and prayer. The first synagogue built in Texas was Congregation Beth Israel in Houston, Texas in 1859.