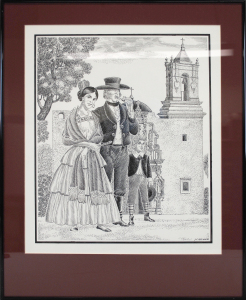 This is a pen and ink drawing entitled “Tejanos del Siglo XVIII” by artist J. Cisneros, commissioned by the UTSA Institute of Texan Cultures. The Spanish presence in Texas has a long history. Originally, Spanish emissaries ran Texas as part of New Spain from 1717-1821. They established missions and presidios to spread Christianity. They founded San Antonio in 1718, which was their most successful settlement in Texas. In fact, what we know as The Alamo is actually the remains of Mission San Antonio Valero. The Spanish population in Texas at the time was made up of only male settlers from Spain, so by the 1730’s they started to send for their families to come to the new world. From there, women also began marrying into the existing community.

Traditionally, Spanish policy did not allow foreigners into their territories. Although they permitted individuals to settle in some areas in the 1790’s, the Spanish were concerned about the potential danger of Anglo-Americans to inspire political conflict. However, in an effort to help protect their lands from hostile Plains Indians, the Spanish started to allow settlers from the United States into Texas. In January of 1821, the Spanish gave permission to the first Anglo-American settler, Moses Austin, to bring with him a group of Anglo-Americans to build homes along the Brazos River. After he passed away in 1821, the Spanish allowed his son Stephen F. Austin to assume his fathers property and bring more Anglo-American settlers with him. Anglo-American immigration into the southwest was largely male and the majority moved into Texas between 1821 and 1835. The extremely low cost of land encouraged them to settle in Texas. Up to 4,605 acres of land could be purchased for 40 cents an acre. The immigration of Anglo-Americans to Texas was complicated since both Spanish and Anglos were highly suspicious of one another. Settlers tend to believe their own culture was superior to others. They clung closely to their original cultures as they moved to Texas. Nonetheless, as Anglo-American men started to marry into the Spanish community, they began to integrate the two cultures.

Sketch of the Alamo in 1845 via tshaonline

Life for Spanish women in Texas at this time was very different from the life of Anglo-American women in the United States. Due to Spanish law, Spanish women in Texas had a number of legal rights, including the right to be party to lawsuits and the ability to act as witnesses at trial. A woman could manage her own property if she signed a declaration that she was responsible for her own actions. Women were equally able to inherit property as their male counterparts. They could write their own wills and act as executors of others’ wills, all without needing the legal permission of their husbands. After Spanish women were married, however, they lost a few rights, including the ability to accuse someone of a crime. Yet, they still maintained some property rights after marriage. After death or at the end of a marriage, the law required a wife’s land be returned to her or her descendants. Any property held in the name of both a husband and wife required the permission of both parties before the land could be sold. Anglo-American women in the United States had far fewer legal rights. When Anglo-Americans migrated to Texas, they agreed to abide by Spanish law.

The Spanish ended their rule of Texas in 1821 when Mexico gained independence. When it came to governing Texas, Mexico decided to maintain Spanish law regarding the rights of women. Though they no longer rule Texas, signs of the Spanish occupation can still be seen in the culture and cities of today.