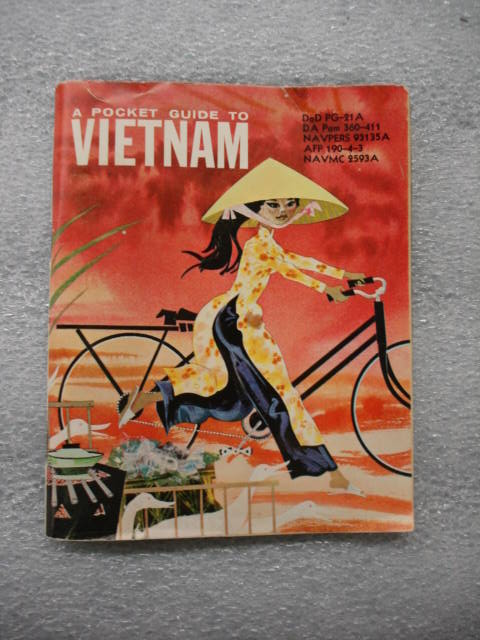 This book is entitled “A Pocket Guide to Vietnam,” and was written in 1966 for the United States Military forces that served in Vietnam. As the title suggests this book is about Vietnam and the culture of the people who live there. The United States Department of Defense published this guide to help soldiers going to Vietnam to better understand the people and politics of the country. The book contains sections on the geography/climate of Vietnam; as well as a short history of the country and region. Their is also a section on the government and political situation during that time period. There are also some helpful directions on how to navigate while in the cities and countryside, their monetary system and some other useful hints. There is also a great deal of information about Vietnamese culture. There are sections that discuss their social structures and social customs. There are explanations of important customs and religious practices and holidays/festivals. Vietnamese clothing style is also discussed, along with food practices and normal dishes that would be served at the different meals. These sections are typical of what you would find in most travel guide books for a country, however there are other sections that really make this stand out as a military resource.

There is a section of “Do’s and Don’ts” for the soldiers while they are in the country, such as “Do appreciate what the South Vietnamese have endured; Don’t give the impression the U.S, is running the war.” There are diagrams that show how to identify the ranks of Vietnamese servicemen in the Vietnamese Army, Navy, and Air Force. There is a list of specific rules for the military forces while they are in Vietnam, such as “Always give the Vietnamese the right of way,” and “Don’t attract attention by loud, rude, or unusual behavior.” There is a section about the legal status of United States soldiers while serving in Vietnam. The language used throughout the guide and the way it is written is what you would find in other military documents.

Vietnam is part of Indochina, which is in Southeast Asia and is bordered on the western side by China, Laos, and Cambodia and on the eastern side by the Gulf of Thailand and the Gulf of Tonkin. Vietnam was once part of Imperial China, but gained its independence in the 10th century. Vietnam had several successful royal dynasties that ruled and they spread politically and geographically until the French took control of Indochina in the mid 19th century. The French were pushed out on Vietnam in 1954, but the country split into two, forming North Vietnam and South Vietnam. The country was unified in 1975 and is now officially called the Socialist Republic of Vietnam.

With the Vietnam War and the social unrest that took place in Vietnam afterwards, their was an influx of Vietnamese immigration into the United States and many came to Texas. Most of these people were businessmen and well-educated who fled because of the new communist government. Those Vietnamese who made Texas their home settled in cities such as Dallas, Houston, Austin, and along coastal cities. The coastal cities in Texas were similar in climate, geography and employment (fishing) to the towns and cities they had come from. There were several waves of Vietnamese immigration into Texas, with the first wave was primarily made up of educated professionals, later waves were of predominately blue collar workers. Houston was a major hub for Vietnamese immigrants due to its growing economy and location near the ocean. Also the climate was very similar to that of Vietnam so it was an easier adjustment for many. Today Vietnamese culture is seen in many parts of Texas.