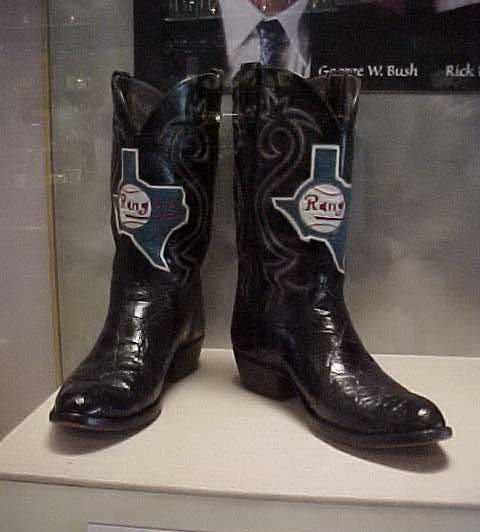 The boots pictured above are made from leather, dyed black, and have the State of Texas on them with the Texas Rangers‘ logo as well. These cowboy boots belonged to George W. Bush, former Governor of Texas and the 43rd President of the United States. The boots were designed and made by Rocky Carroll.

George W. Bush was born on July 6, 1946 in New Haven, Connecticut to parents George H. W. Bush and Barbara Pierce Bush. After attending school in Texas, Bush enrolled in at Phillips Academy in Andover, Massachusetts, from 1961 to 1964. When he graduated he went on to study at Yale University where he completed a Bachelor’s degree in History in 1968. After college, Bush enlisted in the Air National Guard, serving in both Texas and Alabama until he was discharged in November 1974. He then completed a Master’s degree in Business Administration from Harvard University in 1975. Bush was elected Governor of Texas in 1994 and served as Governor until 2000, when he was elected as the 43rd President of the United States. Bush served two terms as President and after his second term was done he returned to Texas as a private citizen.

Rocky Carroll, who made the boots pictured above, is a Texas boot maker that handcrafts custom leather boots. He has made boots for every President of the USA from Ronald Reagan to George W. Bush, the Queen of England, and several other high profile people. Carroll is the son and grandson of boot cobblers and has also helped his children open boot shops. He opened his first shop when he was 18 and has been making boots ever since. In 1964 he joined the Harris County Sheriff‘s Reserves and would work the graveyard shift, then turn around and open is store in the morning. He retired in 1996 and has been working at his store ever since.