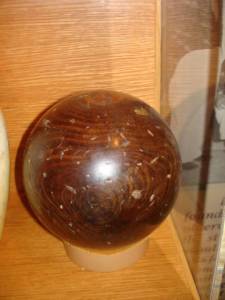 This object is a wooden bowling ball originally used in 1889 by the Bexar Bowlers of the Bexar Bowling Society. Bowling is one of the most popular sports in the world and the history of bowling is believed to go back to 3200 BCE. This early date was based on a find by British anthropologist Sir Flinders Petrie. He found some objects in a child’s grave that looked like they could be used as for bowling. Others, like the German historian William Pehle, believe bowling originated in Germany around 300 AD. Bowling was also popular in England during the reign of King Edward, so popular that it was outlawed because soldiers were neglecting archery practice in order to spend more time bowling. Bowling was brought back by King Henry VII and has remained popular ever since.

At this time there were different variations of games with pins being played. These games were eventually brought to America. Bowling was first mentioned in America in the book Rip Van Winkle by Washington Irving. In his book, Rip hears the sound of “crashing ninepins.” The sport of bowling had many ups and downs when it reached America. In 1841 Connecticut law made it illegal to have ninepin lanes. Making bowling illegal was in large part because the game attracted gambling and drinking. Nine pin bowling was the most popular form of bowling in the United States and Texas was no exception.

In Texas, 9 pin bowling was popularized by the turnverein movement. This movement was brought over by the forty-eighters, political refugees from Germany. People associated with the turnverein movements were strong supporters of gymnastics and athletic clubs, but they were also involved with a variety of different causes. Turnvereins didn’t appear in Texas until 1851 and they were located in places like Houston, New Braunfels, Galveston, San Antonio, and Comfort. In Houston “Turners,” as they were called were involved with the needy and sick. The Turners also established schools and entertained the public. Turners in Fredericksburg were responsible for organizing volunteer fire departments. Even though new Turner clubs were established, gymnastics was never that popular in Texas, and as founding Turners grew older the gymnastic equipment was typically replaced with bowling lanes. As the Turners began to disband and merge with other clubs, 9 pin bowling gained momentum.

Today 9 pin has all but disappeared, except in some Texas towns where 9 pin bowling is still incredibly popular. Different from the conventional bowling most people are used to, 9 pin bowling involves bowlers rolling a wooden bowling ball at pins that are set up in a diamond formation. In the center of the seven pins is one pin called the number 5 pin or “kingpin.” Bowlers must knock down the 8 pins surrounding the one in the center. As the team knocks down the pins points are accumulated. If you are curious about this game you can visit a 9 pin bowling club in one of the small Texas towns where this game is still popular. 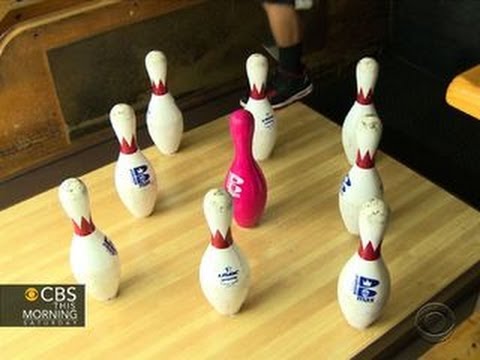 Click the video above to view ‘Nine-pin bowling alive and well deep in the heart of Texas’ via CBS This Morning.