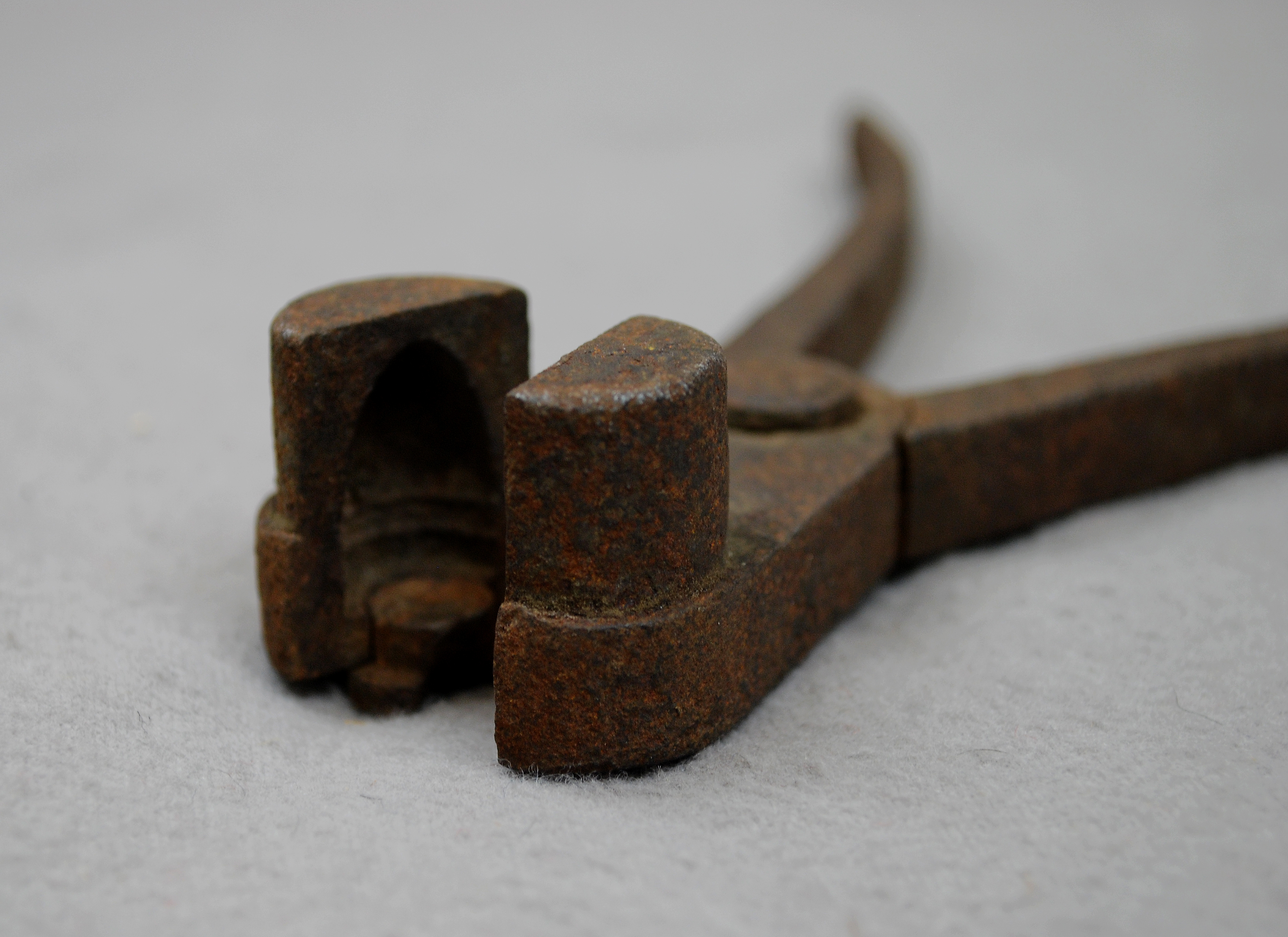 This object is a single cavity bullet mold for a .58 minié ball muzzle-loading rifle. According to the donor this mold was used during the American Civil War by a man named John Jacob Thomas. According to family tradition, Thomas immigrated from Switzerland and served with the Refugio Home Guard, and also served as a Refugio County constable in 1864.

In the spring of 1861 the first shots of the American Civil War were fired at Fort Sumter. Although, Texas had worked hard to join the Union in 1845 they were concerned by the election of Abraham Lincoln and believed he was a threat to slavery. Texans tried to get Sam Houston to call a convention but Houston was devoted to both the Union and Texas and refused to take any steps that would aid secession. A convention was eventually held and Texas seceded from the Union in March 1861. The war would last until 1865 and result in more 600,000 casualties, making it the bloodiest war ever fought by the United States.

Bullets like the ones made from this mold were called minié balls and were one of the reasons why the causality number was so high. The minié ball was one of many technological innovations during this time period. The minié ball was invented by a Frenchman named Claude-Etienne Minié. However, the French never adopted the bullet design. It was James Burton a man from Harper’s Ferry, Virginia who perfected the bullet in the United States. “Burton simplified the design…and developed a hollow-based, .58-caliber lead projectile that could be cheaply mass produced.” One person could manufacture about 3,000 bullets an hour. Different from a regular musket ball the minié ball was cylindrical in shape with a hollow base that expanded when fired. “By the mid-1850s, the fully evolved minié bullet made it possible to build an infantry weapon as easy to load as the old smoothbore musket but with the accuracy and range of a rifle. The term rifle-musket was used to show the weapon’s lethal combination.” A soldier using one could fire up to six shots a minute, and with more time to aim could hit a four square-foot target at 500 yards. The minié ball was used by both the North and South.

Although, the minié ball was a new ground-breaking invention, musket fire was responsible for a large amount of the casualties. Because of the relative softness of the bullets, they would flatten and deform on impact, creating a larger wound and more severe injuries. With a regular musket ball the entrance wound was usually the same size as the exit wound. However, with the minié ball the exit wound was much larger. Minié ball bullets were also more likely to break and splinter bone than a traditional musket ball, and in turn cause more damage to muscle and tissue. Almost all direct hits from a minié ball were deadly, though some soldiers did survive.

The soldiers who survived being hit by one of these bullets would be taken to army surgeons, typically encamped near the battlefield. Cleaning contaminated wounds was time consuming and sometimes did not work. In a battle environment and a mounting number of injured men, amputation was sometimes the only option. An amputation was more successful if done before the wound became infected. With the poor sanitation available at the front, infection was a common problem during the war and caused twice as many deaths as the battle wounds themselves. One reason rate of infection was so high was because it was not yet common practice to sterilize medical equipment prior to surgery, and the concept of germ theory had not been completely accepted. Even though Civil War surgeons saved more lives than not, they had a bad reputation amongst the soldiers and were often called butchers.