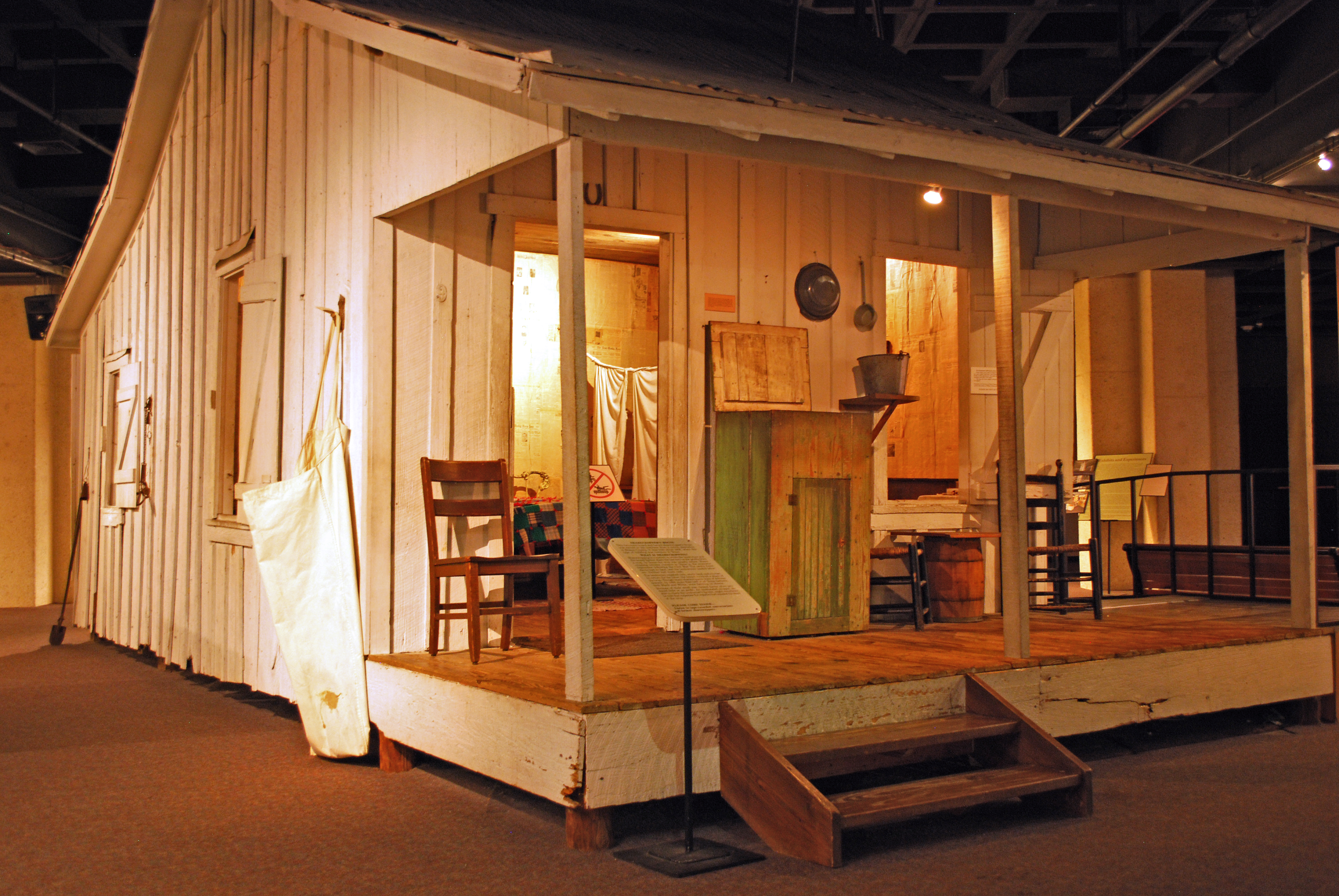 This artifact at the UTSA Institute of Texan Cultures is a sharecropper’s cabin. Constructed out of simple materials around 1900, the cabin most likely served as a residence for a tenant farmer and his or her family. It’s a simple home with two rooms, windows with no glass, a tin roof and a front porch. While in the past it was someone’s home, today it stands as an example of a practice that flourished in the American South for decades.

Sharecroppers in Georgia 1888. Image via britannica.com

Sharecropping is an agricultural system where a landowner allows a farm worker (also known as a tenant farmer) to rent and use the land in exchange for a share of the expected crop production. This system of agriculture became a standard in the American South after the American Civil War. The large, newly freed African American population, were suddenly in need of employment and landowners (often former plantation-owners) were in need of employees to farm their lands.

In the Reconstruction Era that followed the American Civil War, many freedmen and their families migrated into the northern United States and Canada in hope of a better life. However, for those who remained in the South, the business of rebuilding after a devastating war was fraught with uncertainty. Usually unable to read or write, many former slaves chose to return to the work that they had practiced before the Civil War—manual labor in agriculture—in order to provide for themselves and their families.

How does sharecropping work?

This system doesn’t sound like a bad deal! Is it fair?

While the system sounds fair, in a majority of cases the tenant farmers were at a large disadvantage. Landowners often took advantage of the tenant farmers in various ways. One popular method involved providing the necessary agricultural supplies at a cost to the farmer. If the farmer could not afford to pay for the start-up supplies, they were given on a line of credit with high interest rates. At the end of the year, the landowners would not only take their portion of the crops but also collect on the interest. If the interest was very high and the tenant farmer could not pay it back, he had to work extra hard to cover the costs for years to come. This often trapped the tenant farmer in a cycle of poverty as they worked to pay the landowner back. Sharecroppers of all races and backgrounds were at the mercy of the landowner. Sometimes, the tenant farmers even had to pay rent on the homes they lived in― this sharecropper’s cabin at the Institute of Texan Cultures reflects one of the many styles of housing used as a sharecropper’s home.

Was sharecropping a big deal in Texas?

Abandoned Home near Novasota, Texas featured in the Novasota Current.

After the American Civil War, many recently freed men migrated to Texas hoping to settle their own land. With the majority of its farmland intact, Texas became the de facto leader in cotton production of the United States. East Texas had a very good climate for cotton and by the turn of the 20th century some figures estimate that Texas cotton produced almost one third of America’s cotton supply. To meet the employment needs, many African Americans and Hispanic Americans flocked to the East Texas area where cotton production was at its peak.

In the 1920’s, four brothers named Clarence, Steve, Tom and Harry Moore bought land near the Navasota area slightly north of Houston, Texas. In the process of constructing a thriving cotton business, the Moore brothers used a sharecropping system that employed African Americans, prison labor, and even German prisoners of war during World War II. After years of successful operations, Thomas Moore donated the cabin to the Institute of Texan Cultures and it was moved to its current location in 1979. Though it’s unknown as to whether the Moore Brothers constructed the cabin or if the cabin came with the property when they purchased it, this little house stands today as a testament to a large chapter in American agricultural history.