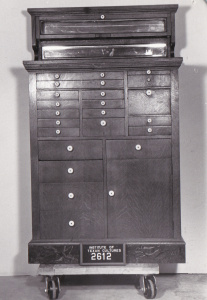 This object is a dentist cabinet from Dr. James Reveley’s dentist office. Dentists’ used to store their instruments in cabinets like this one. Dentistry is one of the oldest medical professions, with evidence of it dating back to 7000 B.C. in the Indus Valley Civilization. Dentistry was also mentioned in ancient Greece with Hippocrates and Aristotle writing on how to treat tooth decay. Starting in the middle ages barbers performed oral surgeries and dental cleanings. The barbers divided themselves into two groups, the first group performed oral surgeries, and the second group performed oral cleanings, shavings, bleedings and tooth extractions. However, it was not until the 18th century when a French man named Pierre Fauchard wrote a book on how to perform basic surgery on a patient’s mouth and teeth that dentistry became a defined profession. After Fauchard published his book, “Le Chirurgien Dentiste” the men who practiced oral surgeries started to call themselves dentists and broke away from the term barber.

In 1840 Baltimore College of Dental Surgery opened becoming first dental school to open. This paved the way for other dentistry schools to open, including the Pennsylvania College of Dental Surgery where John Henry “Doc” Holliday received his Doctor of Dental Surgery (DDS). Holliday came to Texas during the Annual Fair of the North Texas Agricultural, Mechanical, and Blood Stock Association at the Dallas County Fair in 1874. Holliday took home the three awards they were offering, “best set of gold teeth”, “the best in Vulcanized rubber”, and “the best set of artificial teeth and dental ware.” Although Holiday’s career veered away from dentistry, his awards led other Texan dentists to improve the way they treated teeth. About 10 years before Holliday won his awards the American Dental Association was formed, consisting of 26 members determined to promote high professional standards and scientific research.

Dentistry has come a long way from the days of the barbershop, and even the most squeamish patients can now expect a relatively pain-free and safe experience. This is in part due to the discoveries of men like William Thomas Green Morton; he discovered the use of ether as an anesthetic. He performed the first painless oral surgery in 1846 and other doctors soon adopted this method of surgical anesthesia. Another dentist who changed dentistry for the U.S., and for Texas, is Dr. Greene Vardiman Black. He believed that dentistry should be scientific and performed by highly skilled professionals. He invented a dental engine with a foot motor, he standardized dental terminologies, and gave dental instruments the names they have now. Many dentists consider Black the father of modern dentistry; he helped dentists all over the country regulate what they called the tools of their trade, and he passed on his professional standards for dentistry.