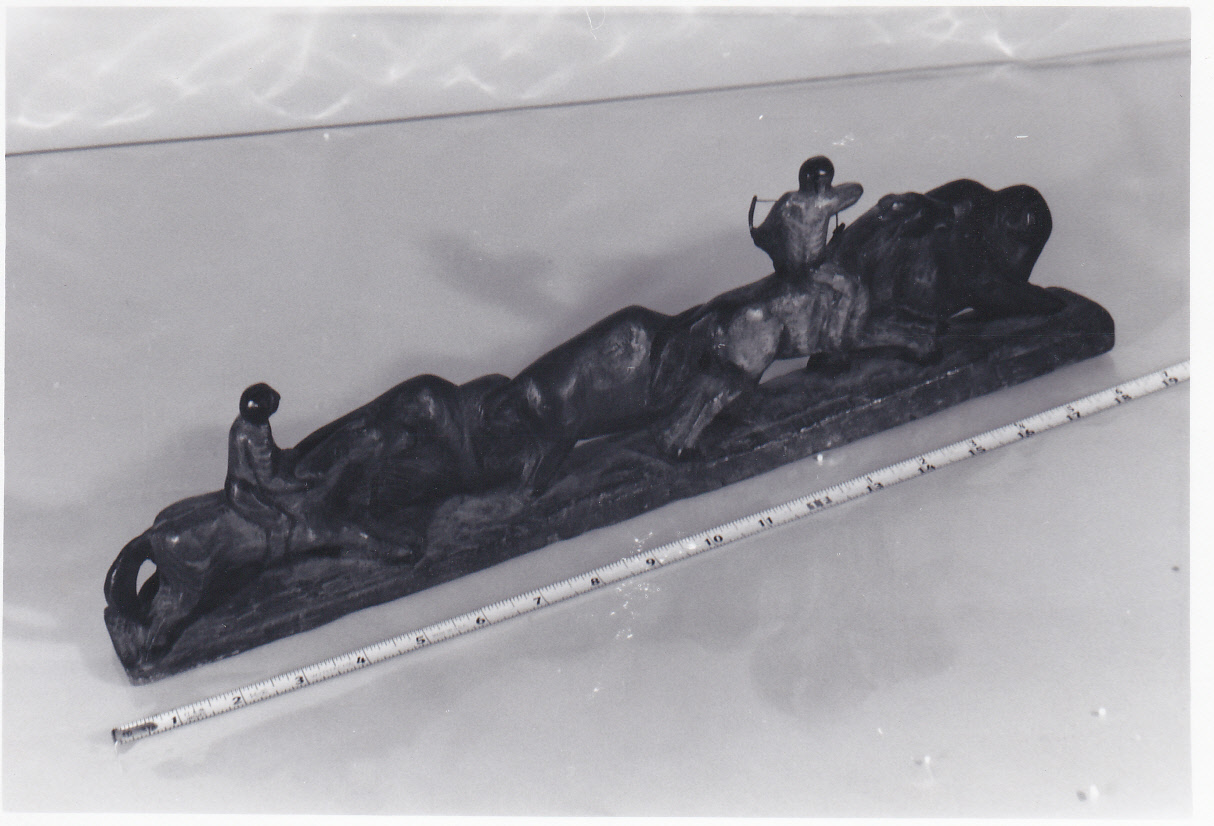 This wood carving is from the Kiowa Native American tribe and depicts a scene where Native American warriors are hunting American bison (sometimes called buffalo).  The Kiowa were a nomadic hunter-gatherer society, which means they would hunt both small and large animals, as well as gather what was available around them from the land, such as berries, roots, etc.  The Kiowa were not originally from Texas and the southern plains, but had migrated from the north.  In the seventeenth century the Kiowa lived near the headwaters of the Yellowstone River, in western Montana. As they moved southward they acquired horses, and guns. They also began hunting bison, and adapted their way of life to match their new southern environment. Eventually the Kiowa set up residence in the southern plains region, including much of what is now Oklahoma and Texas. They also formed powerful alliances with other tribes like the Southern Cheyenne and Comanche. These alliances were used for trade, raiding activities, and defense/attacks against white settlers.

The carving depicts the most important food source for the Plains tribes, the bison.  Many Plains tribes have traditions and economies centered around the bison. In addition to food, the animal provided hides, sinew, bone and other materials used for tools, clothing, and shelter.  Nearly every part of the bison was used, and bison harvested at different times of the year could be used for different purposes. The bison was a valuable resource for all Plains tribes, and when the herds started to dwindle due to settlers and professional bison hunters, their way of life was put into jeopardy.  The systematic slaughter of the American bison (aka. buffalo) helped to force the Native people of the plains onto reservations.

The so-called Red River War of 1874 and 1875 marked the end of the free roaming lifestyle of southern plains tribes. The U. S. Army launched this campaign to end raiding by the Comanche, Kiowa, Southern Cheyenne, and Arapaho tribes and, to enforce their relocation to reservations in Indian Territory. The Medicine Lodge Treaty of 1867 had established reservations in Indian Territory (Oklahoma) for the Southern Cheyenne, Arapaho, Comanche, and Kiowa. However, this treaty was destined for failure. The US government failed to live up to its agreed upon terms, and by 1874 many members of the tribes had also chosen to ignore the terms of the treaty. Meanwhile, despite being officially relocated onto the reservations, other tribal members continued to raid white settlements, simply using the reservation as a home base for their attacks.  The Red River War officially ended with the surrender of Quanah Parker and his band of Quahadi Comanche at Fort Sill during the summer of 1875. Today the Kiowa nation includes approximately 12,000 members with many still living in Oklahoma, mainly in Caddo and Kiowa counties.  Other Kiowa have moved to urban and suburban communities around the country.